iOS has never been an “open” operating system. There are a number of limitations that Apple imposes upon iOS, and you can’t really install apps from outside the App Store, without a jailbreak. However, all that changed, when Apple released Xcode 7. Apple wanted to let developers test their apps on their own devices, without having to pay the $99 annual fee for a developer account. So, they allowed developers to use Xcode to install their apps on an iOS device. In this article, we’ll tell you how you can use this to install just about any app on your iPhone, or iPad, without having to Jailbreak it.

Note: This method only works for apps whose source code is available. Apps like f.lux, and GBA4iOS have their source code available on GitHub, and Bitbucket, etc. You can search for the source code of the app you want on Google, to check if you’ll be able to use this method.

Xcode is the official development environment for iOS apps. We’ll use Xcode 8 to install apps onto an iPhone running iOS 10. If you don’t already have Xcode on your Mac, you can download it from the App Store, or directly from Apple. Xcode 8 supports SDKs for iOS 10, so we can’t use any older versions. If you don’t know what an “SDK” is, don’t worry about it.

Note: If you’re a beta tester for iOS, and have anything greater than iOS 10.0 installed on your iPhone, you’ll need to install Xcode 8 Beta. Xcode 8 only supports devices up to iOS 10. We’ll be demonstrating this on an iPhone 6S running iOS 10.0, using Xcode 8.

Once you have downloaded Xcode on your Mac, you’re almost ready to get going.

Before we get to sideloading the app, we’ll first need the source code for it. I’m going to try and install f.lux on my iPhone. By default, the f.lux app is only available for jailbroken devices, but you can use this method to get it on your iPhone as well.

To install the f.lux app on your iPhone, just follow the steps below:

Note: I will be taking this step by step, to ensure that you can understand what to do, even if you’ve never used Xcode before. Users who know the basics of Xcode, feel free to skim through these steps.

1. First, head over to the GitHub repository for f.lux, and click on the link that says “1 release“. 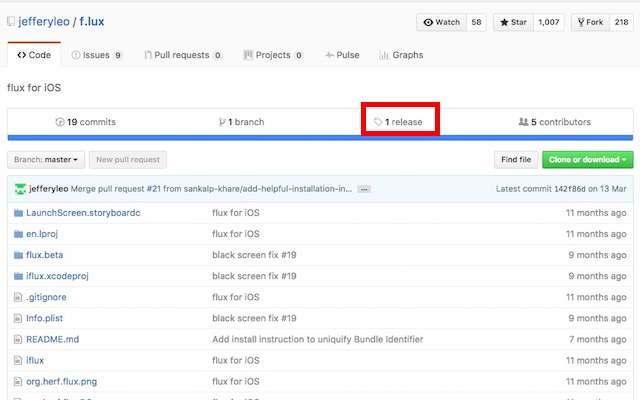 2. Download the source code for f.lux, from the link. 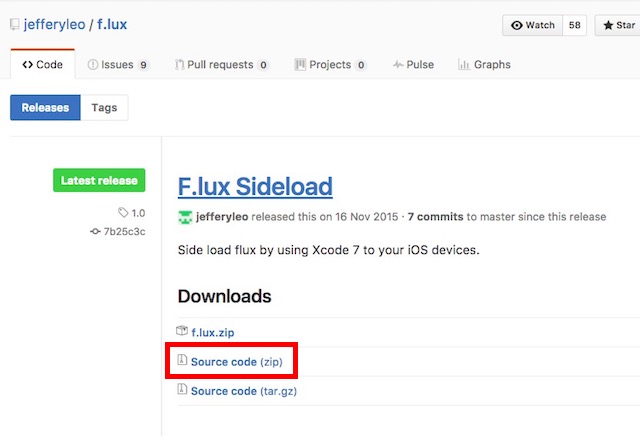 3. On your Mac, unzip the file you downloaded, to get the f.lux project folder. Now, launch Xcode 8 on your Mac, and click on “Open Another Project“. 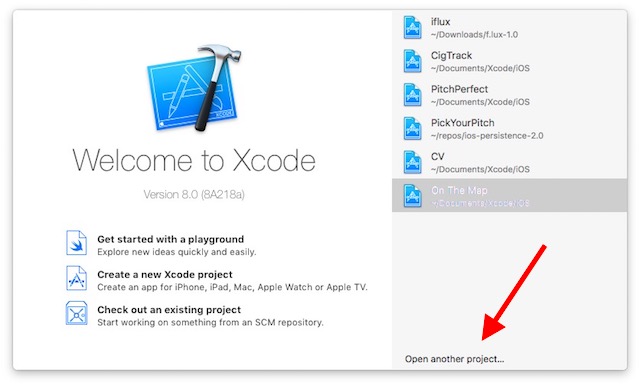 4. Open the folder you unzipped, select the file that says “iflux.xcodeproj“, and click “Open”. 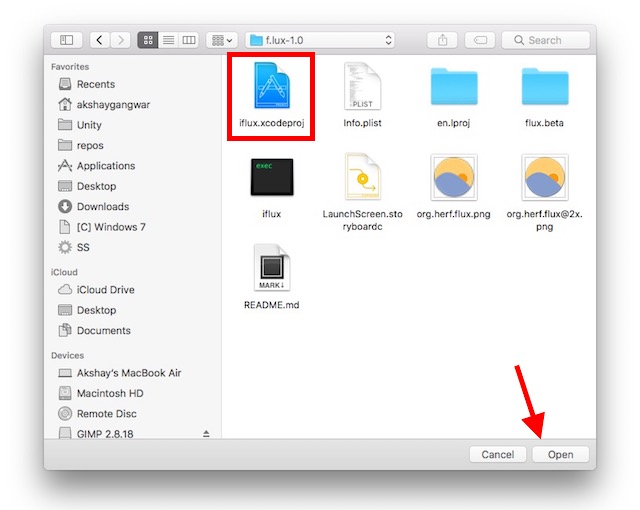 5. Xcode will load the project for you. Click on “iflux project” in the left sidebar. 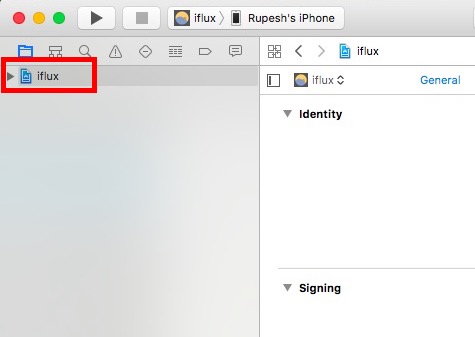 6. You’ll need to change a couple of settings in order to install the app on your iPhone. First, go to “Xcode -> Preferences“, and click on the “Accounts” tab. You’ll have to add your Apple ID here. You can simply click on the plus icon in the bottom of the screen and add your Apple ID. It doesn’t need to be a developer ID, you can use your free Apple ID, as well. 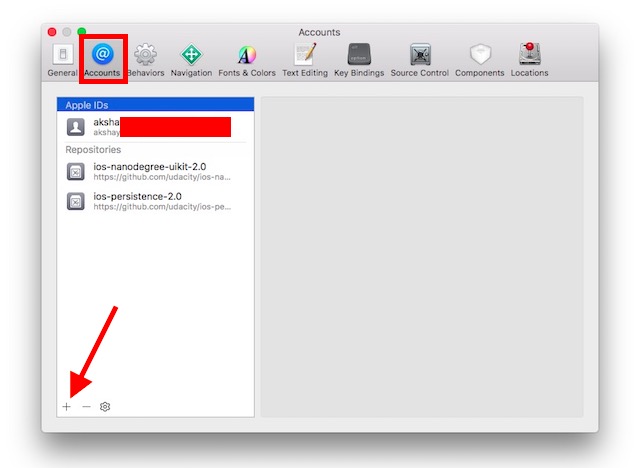 7. Once you have done that, you will need to change a couple of settings for the Xcode project. Firstly, change the value next to “Bundle Identifier“, and make it anything that is unique, and looks like com.xyz.iflux. In my case, I’ve replaced “xyz” with my name. 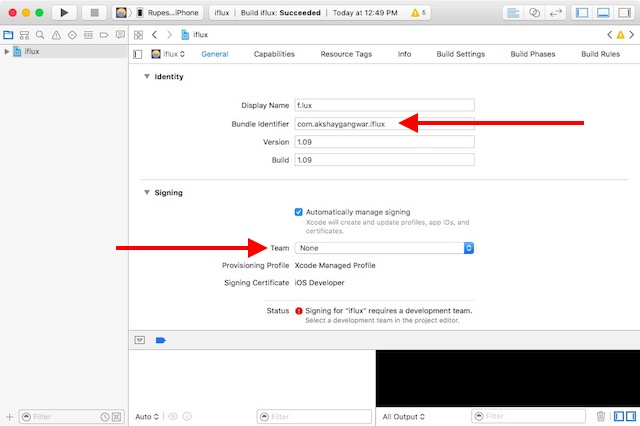 8. Next, you’ll have to add a “development team” for the project. Simply click on the drop down box next to “Development Team”, and select “Your Name (personal team)“. 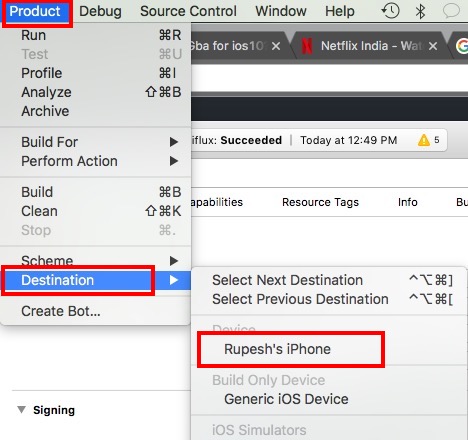 10. Now, click on the “Run” button in Xcode. Xcode will then begin compiling the app for your iPhone. If you get warnings (yellow triangle signs), don’t worry about them.

11. Xcode will prompt you with an error saying that you need to trust the developer on the iPhone. On your iPhone, go to “Settings -> General -> Profiles and Device Management“. 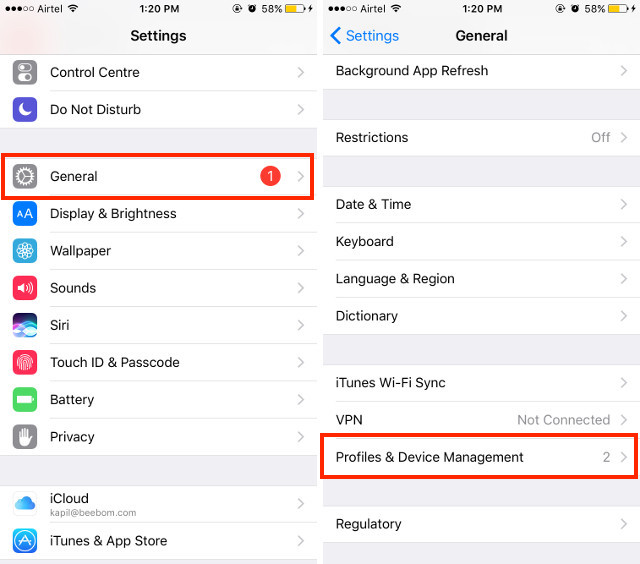 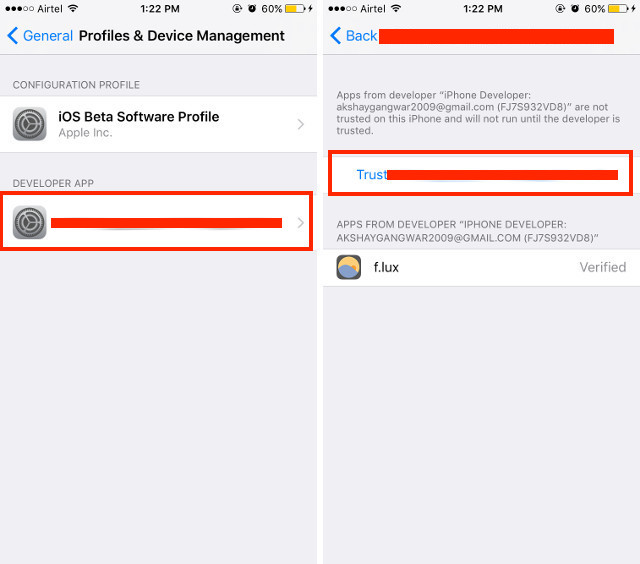 13. You can now go to your homescreen, and look for f.lux. Tap on the app to launch it, and it will work! 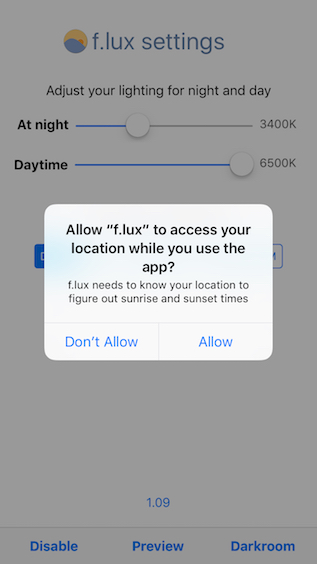 You can use this method to install any app for which you have access to the source code. A lot of apps have been making their source code available, so that users can easily sideload them, even if their iPhones are not jailbroken. Some apps that have made their source codes available are:

There are a lot of open source apps available for iOS. You can check out the entire list over at GitHub.

Sideload iOS Apps on iPhone or iPad with Ease

Now that you know how you can use Xcode 8 to sideload iOS apps on your non-jailbroken iPhone, or iPad running iOS 10, you should go ahead and look for your favourite apps’ source code online. As always, if you face any issues with this method, do let us know in the comments section below.

How to Easily Sideload Apps on Any iPhone