Samsung’s Galaxy S8 and S8+ launch was pretty much just a confirmation of all the rumours and leaks that were circulating all over the internet. So while everyone was ready for the “Bixby Button”, the confirmation felt just as bad. A dedicated hardware button for an AI assistant that people might not even use much? It sounded strange, and it still does, which is why a lot of attempts have been made to remap the Bixby Button to something more… sensible and useful. We had just that, before Samsung went ahead and broke the functionality of that app by ensuring that the key events for the Bixby button get swallowed up by the OS before it can be intercepted by any app. However, we have a lot more solutions available now, and while it’s easily possible to remap Bixby to Google Now, you can now remap the Bixby Button to almost anything you want. So, if you’re interested in that, here is how you can remap the Bixby Button to any application:

Before we get to the latest method to remap the Bixby button, let’s discuss a little bit about the history of remapping the Bixby Button, and the attempts (and how feeble they turned out to be) that Samsung made to prevent this “misuse” of a hardware button that was otherwise completely useless anyway.

The first method that developers had come out with involved intercepting the key events that happen on pressing the Bixby Button, and using them to open a different (user-selected) app, instead. However, Samsung soon pushed an update to both the phones that broke this app. Samsung ensured that in the new update, the key events from the Bixby Button will no longer even reach Accessibility Services, thereby preventing any apps from using those key events for launching custom applications.

Using BixBye to Remap Bixby Button on S8 and S8+

You can easily use the BixBye app to remap the Bixby Button to a variety of different functions, and applications.

Note: The BixBye app is still in its early stages, and neither the developer, nor I can guarantee that it’ll work perfectly fine on your device. That said, I tried it out on the Galaxy S8, and it worked perfectly okay. Use at your own discretion, and only if you understand the risks involved with alpha software. 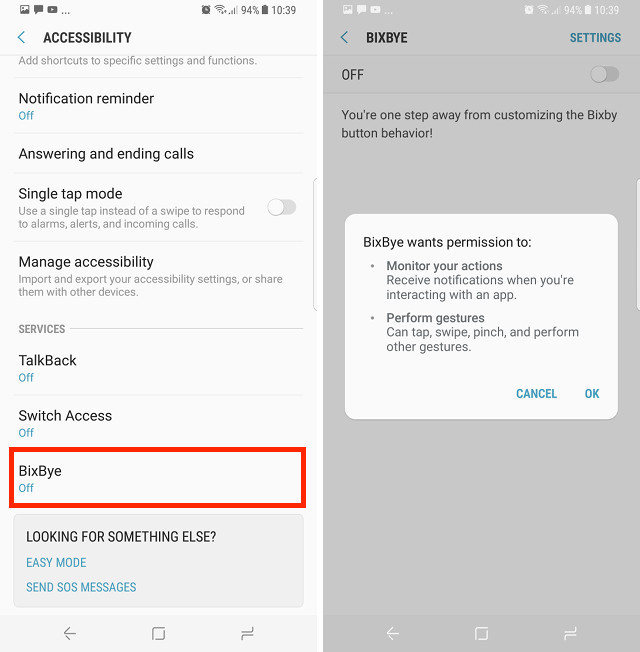 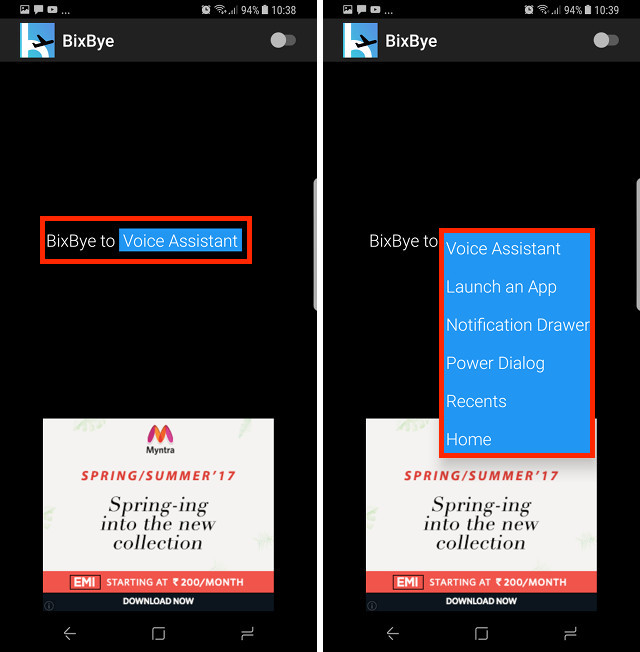 I tried out all the options available, and while most of them work fine, the Voice Assistant doesn’t seem to be able to get Google Assistant on the screen, even though it does launch Assistant in the background, which is weird. Also, if you set the Bixby Button to “Camera“, pressing it while the phone is locked does launch the Camera, but you’ll have to unlock the phone in order to get to it. However, seeing as the app is still in its early stages of development, we can expect to see a lot more feature updates, and performance improvements over time.

Use BixBye to Remap the Bixby Button to Any App

While there are a lot of apps available in the Play Store that will let you remap the Bixby Button to another app, or some service, but BixBye is the only one offering not only Google Assistant, but a plethora of services that you can enable with the Bixby Button. Plus, it also gives the option to launch any installed app from your Galaxy S8 or S8+, so you can assign the Bixby Button to an app that you use very often and quickly launch it with just a press of a button.