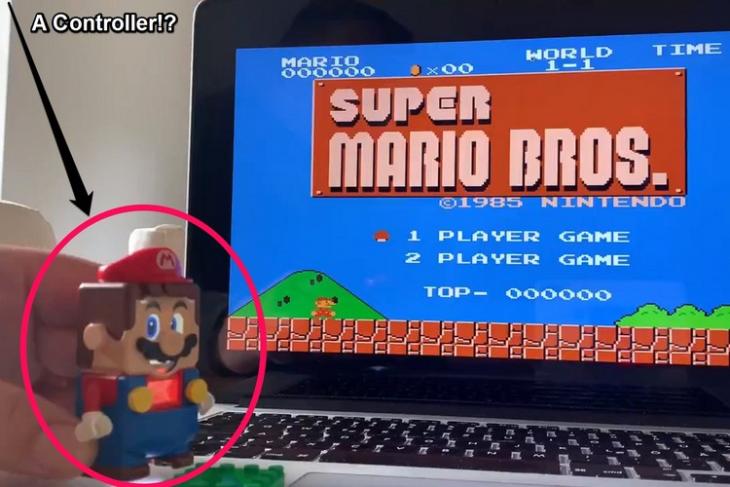 Playing Nintendo’s evergreen arcade classic, Mario Bros. is always fun, whether you use a retro mouse or a high-end controller. Now, as people are curious and creative, we have seen people play the game with many kinds of custom-made controllers over the years. However, playing the game with Mario himself is something we did not expect to see. But again, this is 2020 and anything is possible!

So, a self-acclaimed “hardware hacker” going by the name of Rick (@r1ckp) has built a controller to play Mario Bros. using a Mario figurine from a Lego toy set that released earlier this year. It has no buttons and the player just needs to use gestures to control the in-game character.

The creator recently shared some tweets (below) to showcase the working of the controller. According to him, he “wrote some code” to convert the Mario figurine into a controller for the game.

Wrote some code to use the #legosupermario to play #SuperMario pic.twitter.com/LOuECESPgT

A Voodoo Doll for the In-Game Mario

Now, as you can see in the videos, Rick is just tilting the figurine forward or backward for the in-game movements. And with the right gestures and taps, the in-game Mario can shoot fireballs to kill the annoying turtles or go down the pipes when needed.

Now, if you are thinking that he converted a regular figurine into this controller, then you are highly mistaken. The tech to convert it into a controller was already there inside the Mario figurine itself.

As Lego makes some of the hi-tech toys for children, the Mario figurine of this particular toy set comes packed with an array of sensors. This enables the figurine to communicate with the digital elements of the toy set, of which it is a part.

Now, there is an accelerometer, a gyroscope, a color sensor, and Bluetooth tech packed inside the figurine. And all the “hardware hacker” did was use these sensors and intercept the signal the figurine was sending via Bluetooth.

According to the creator, “the complicated stuff was figuring out the Bluetooth protocol.”. Following this step, it was just a matter of “simulating keypresses” to make the controller work.

Rick says that he will be sharing the necessary codes to tweak the figurine soon. So, keep an eye on his Twitter profile to get the codes to convert your Lego Mario figurine into a voodoo doll for the in-game Mario.