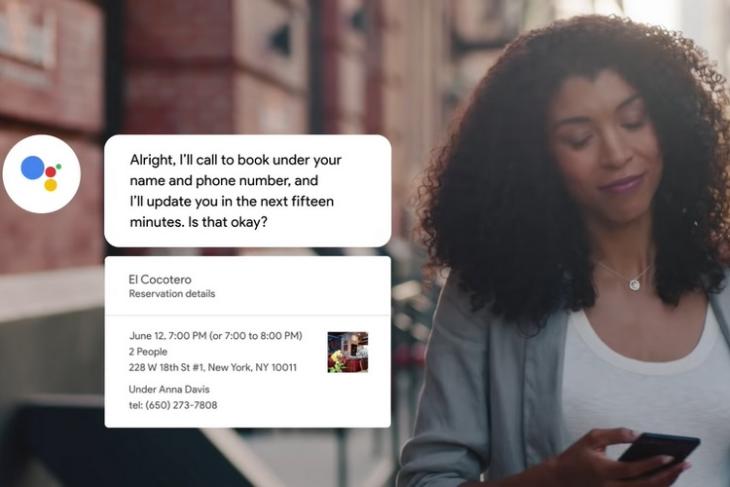 Google surprised everyone with the Duplex demo at Google I/O 2018, showing how AI can be used to make voice calls to make reservations and other bookings on your behalf. The technology appeared to be far too futuristic at the time, and Google also revealed it will disclose the AI nature of the calls to anyone Duplex call.

Now, Google has confirmed that Duplex arrives this summer for a select group of businesses with three focus areas – reservations at restaurants, inquiries about holiday hours and haircut appointments.

Yesterday, Google invited US journalists to a restaurant in New York City and gave yet another demonstration of Duplex, asking the attendees to masquerade as a restaurant employee and take calls from Duplex. The overall impression of those who interacted with the AI-system was that Duplex is now smarter, sounds much more human, and can even handle tricky questions.

Nick Fox, VP of Product and Design for the Google Assistant, said that Google will begin the testing of Duplex ‘in the coming weeks’. However, the technology will only be accessible to a ‘set of trusted tester users’, a small number of businesses Google has partnered with. Google says Duplex has been only trained for the three scenarios it will launch with.

Google will also give the partnering businesses an option to disable Duplex anytime they want.

Each Duplex call will now explicitly tell the retailer that the call is being recorded, aside from revealing that the called is a virtual assistant. Google will try different variations of the disclosure statement during the test period, and shortlist those which make people feel comfortable while talking to a robot. Here’s a sample conversation of Duplex making a reservation at a restaurant:

Conversational beats such as ‘umm’ and ‘hmm’, which Google calls speech disfluencies, will also sound more natural when testing begins. The tone of these expressions will also vary, ranging from apologetic to thankful, depending on the situation. Duplex currently has support only for the English language, however, Google has trained the AI system to understand a majority of accents and dialects.

There will eventually arrive a situation Duplex can’t handle, but Google is ready for that too. Duplex will transfer all such calls to a human operator at Google’s ‘call center’, who will then take over the call and accomplish the required task, while the recording will be used to train Duplex.

Scott Huffman, VP of Engineering for Google Assistant, revealed that Duplex currently has a success rate of 80%, handling 4 out of 5 calls with ease and accomplishing the required task. Also, the voice of Duplex will vary for every call, ranging from a young female to an old male with a distinct pitch and vocal tone.

With a summer launch on the cards, Duplex looks ready for prime-time, but there are big ethical and abuse questions to be answered, which will surely get clarified by the time Duplex rolls out at scale.