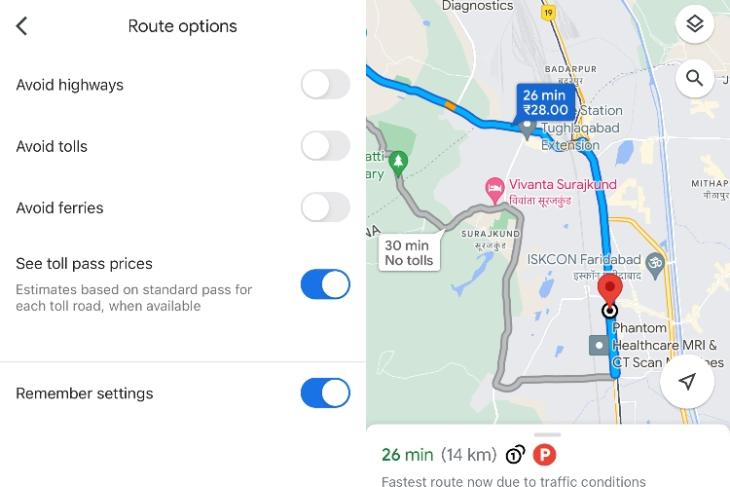 Google Maps is one of the most popular navigation apps used globally, and Google often adds various new features to the platform to make it more useful and informative. Back in April this year, the tech giant announced that Google Maps will be able to show toll prices on Android and iOS devices. Now, this new Google Maps feature has started rolling out for users in certain countries, including India. Check out the details below!

You Can Now See Estimated Toll Prices on Google Maps

Google recently revealed the update via an official post on its Maps forum. As you can imagine, the new Toll Pass Prices feature in Maps shows the estimated toll price in case there are toll booths in your specified route. The prices will appear on the route that you have selected before you start the journey in Google Maps. You can check out the screenshot below to see how it looks.

Now, it is worth mentioning that if you want Maps to show the toll prices with or without a toll pass, you can simply go to “Route Options” from the three-dot menu and disable the new “See toll pass prices” toggle. You can also enable the “Avoid tolls” option to always see toll-free routes.

This new Google Maps feature comes in addition to the recent ability to view the air quality of a certain place within Google Maps on Android and iOS.

As for the availability of the new toll prices feature, it is currently available for around 2000 roads in India, Indonesia, the US, and Japan. Google has, however, confirmed to add toll prices for Maps in more countries going forward. So yeah, stay tuned for further updates on the same, and let us know your thoughts on it in the comments below.