Google finally launched its Amazon Echo competitor, christened Google Home. The smart speaker comes in a much smaller form factor than the Echo, and promises a lot more. What with Google Assistant packed in (which we have seen is much better than Siri), I definitely have high hopes from Google Home. So, if you’re wondering what these two products are capable of, look no further. In this article, I will pitch the Google Home vs Amazon Echo, and see how Google Assistant fares against Alexa:

We’ll start off with some really basic, and common commands. Stuff that I would usually do everyday, on my Google Home, or Echo. This comprises of things like checking the weather, basic conversions, taking notes, etc.

Note: We’re using these devices in India. While Google Home easily accepts locations based in India, and works with them, the Echo does not. So, your mileage may vary.

This first command is a prime example of the difference it makes, using an Echo in a country it is not yet supported in. 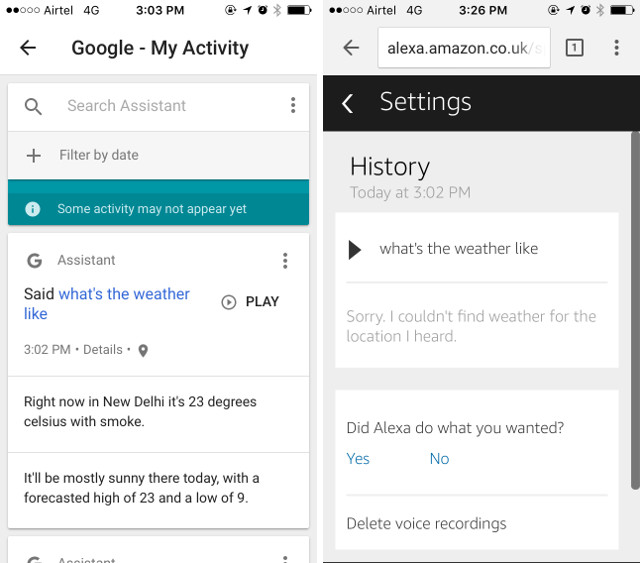 While Google Home can easily inform me of the current weather conditions in New Delhi, the Amazon Echo doesn’t like to work like that. It only really accepts US based addresses, and for people in the US, this command will work perfectly.

However, if you want to check the weather in a location outside of the US, you can do that pretty easily, so let’s try that next.

This time around, I’ll phrase the weather request differently. 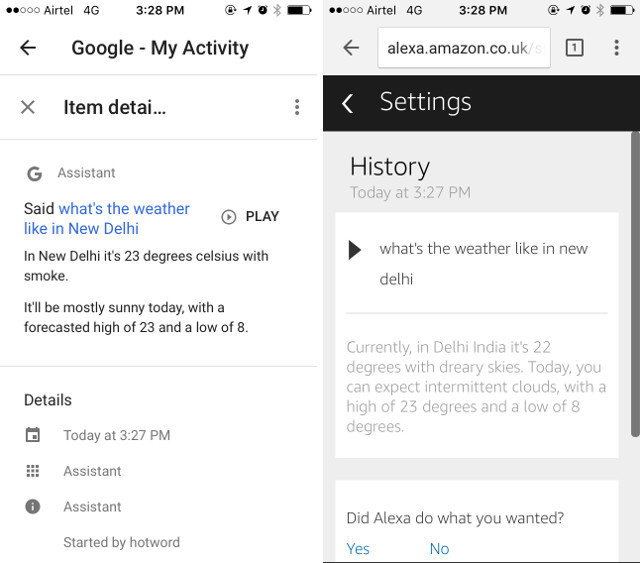 Google Home worked, obviously, but this time around, the Echo was also able to get me the current weather conditions for my city. So, if you’re using an Echo outside the US, in a country not yet supported by Amazon Echo, you’ll have to be careful to phrase your weather related queries properly.

3. How many inches in a metre

Let’s check whether our two smart speakers can perform simple conversions for us. 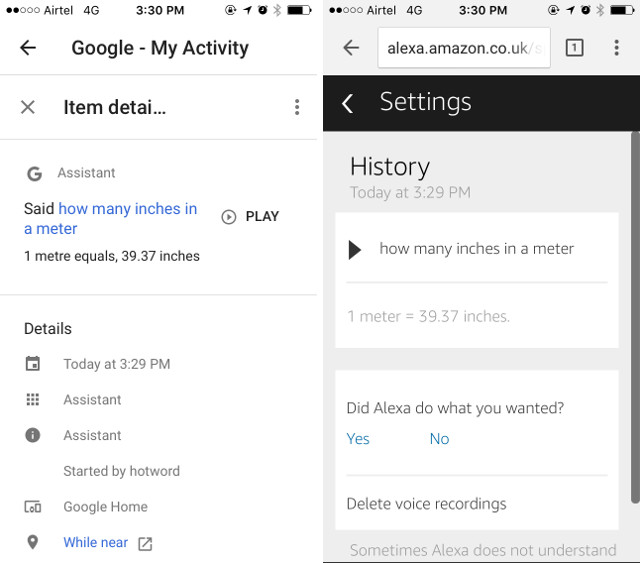 Well, I would’ve been really disappointed if this didn’t work. It’s not a surprise, really, that both the Google Home, and the Amazon Echo can handle simple conversions.

Not many people use their smart speakers to take notes, but I think it’s a perfectly good way of quickly writing something down. So, let’s ask the Google Home, and the Amazon Echo to take a note. 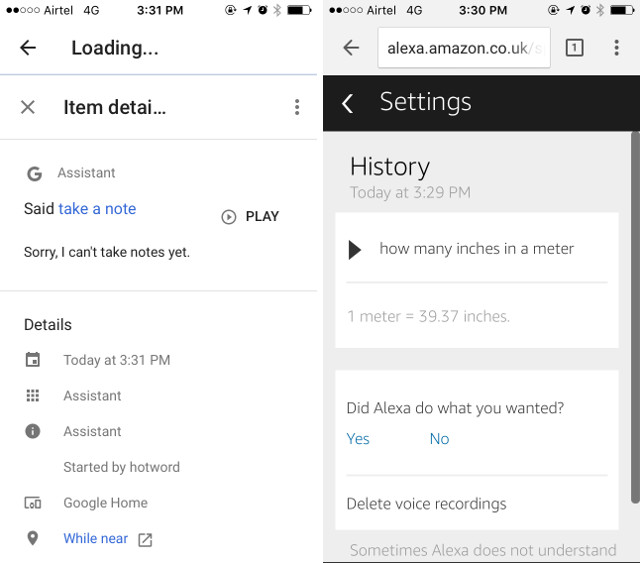 Google Home apparently can’t take notes, yet. Not even when Google has a Note taking app (Google Keep), that syncs over the cloud, and is even installed on my phone. What’s even more surprising, is that Google Home seems to be using Google Keep to manage shopping lists, anyway.

The Amazon Echo, on the other hand, asked me for what the note was, and added it to my to-do list. Not exactly perfect, but at least Amazon doesn’t have a note taking service, so I will actually commend Amazon for how they’ve handled this.

This is not really something I ask either of my smart speakers to do, but it’s a very basic thing that even Siri can do, so I really wanted to check. 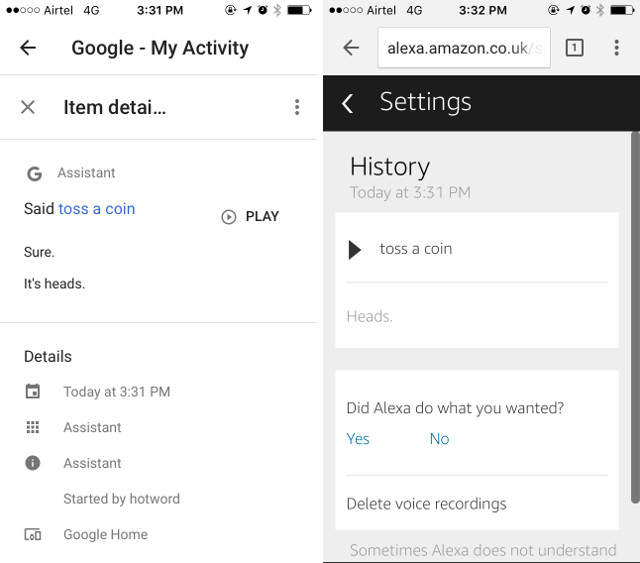 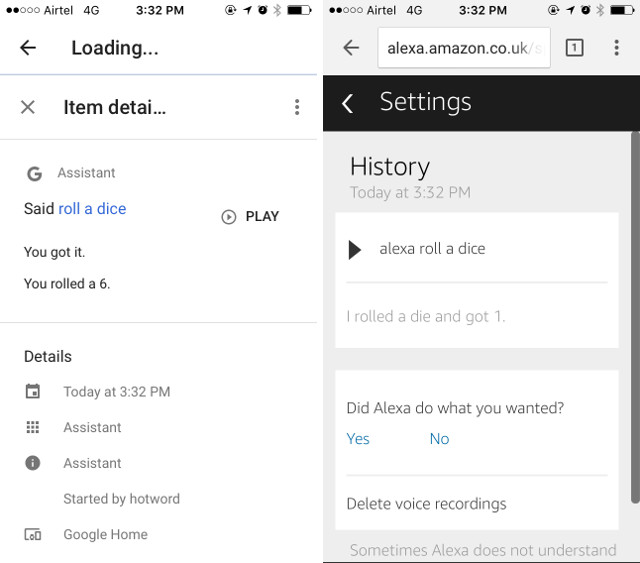 Clearly, both the Google Home, and the Amazon Echo are perfectly capable of tossing coins, and rolling dice. So far so good. Both of our assistants were good enough, when it came to basic commands (except for that one little thing that Google Home did with taking notes). Let’s move on.

One thing that I immediately noticed with both the Google Home, and the Amazon Echo, was that they sound great. Which means that they’ll make for great stand-in speakers at a small house-party. Or you know, just to keep you entertained with some music when you need it. 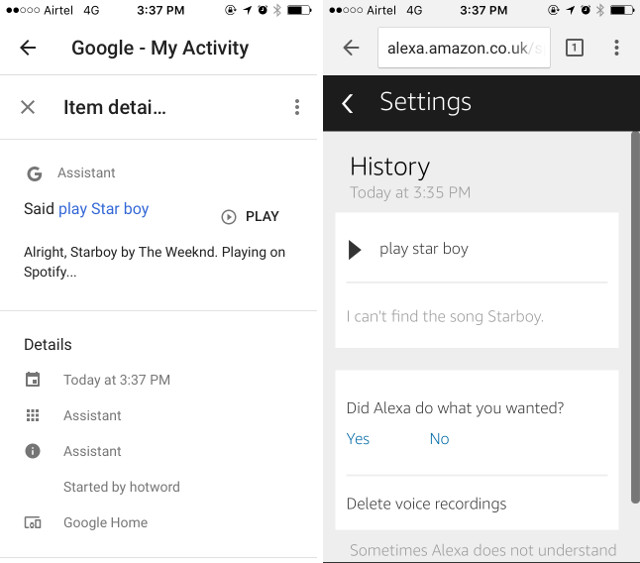 On the Echo, this command would normally look for Starboy in “Amazon Prime Music”. however, I use Spotify, and both the Google Home, and the Amazon Echo let me select the default media player that I want to use, which is why I have them set up to use Spotify, and I can simply say things like “Play Hymn for the Weekend”. The problem is that even when I have the default set to Spotify, Amazon doesn’t look for it, and is unable to play it. 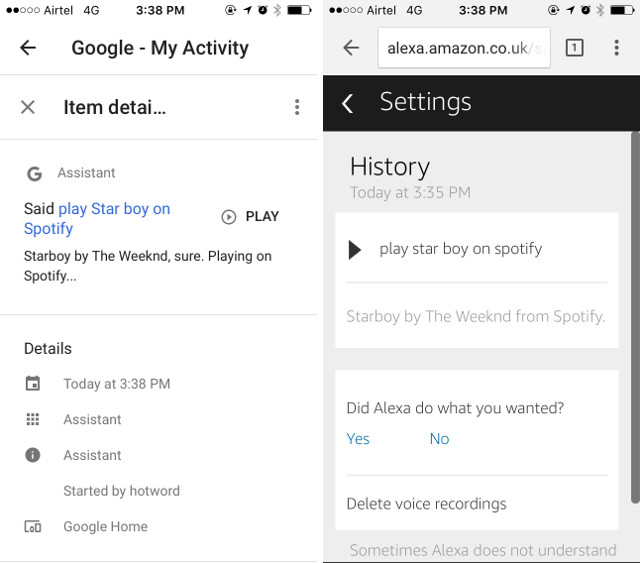 This worked for the Amazon Echo. Google Home was obviously still able to play the correct song, off Spotify. By the way, Google Home will let you choose a default between Google Play Music (obviously), YouTube Red, Spotify, and Pandora. More integrations may be coming, but these are the services you can set as default, for now.

Both the Amazon Echo, and the Google Home, are perfectly capable of streaming radio, using TuneIn. So let’s check that out, next. 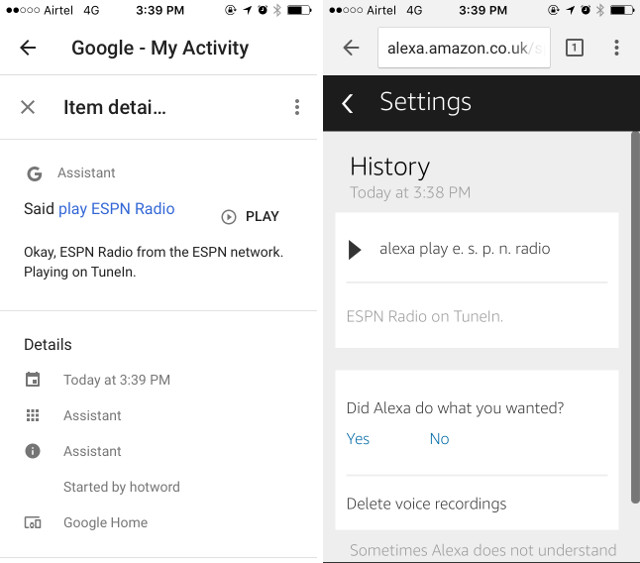 Both the Amazon Echo, and the Google Home can play radio from TuneIn, which is great. Depending on your internet connection, you may notice occasional buffering, but that’s to be said of any internet streaming service.

Like I said before, Google Assistant’s AI has proven itself time and again, to be one of (if not the) best AI, and that calls for a context, and capability test on both the Google Home, and the Amazon Echo.

1. Who is Roger Federer 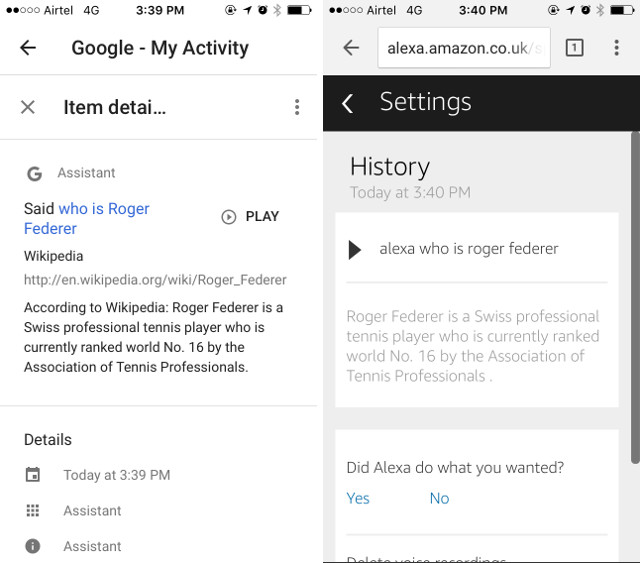 This was quite a simple query, and both the Amazon Echo, and the Google Home were able to handle it perfectly well. So, let’s move on to some queries that use this context as their base. 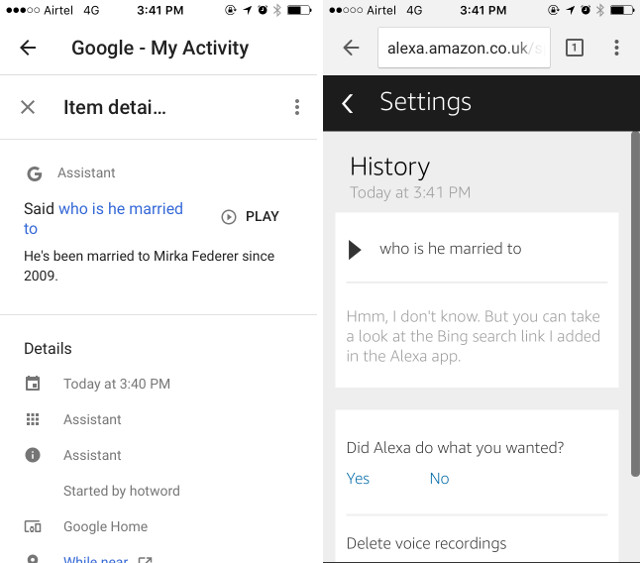 Amazon Echo simply doesn’t understand context. However, Google Home does, and provides the perfect answer to the query. However, I really want to take this one step further.

3. When did they get married 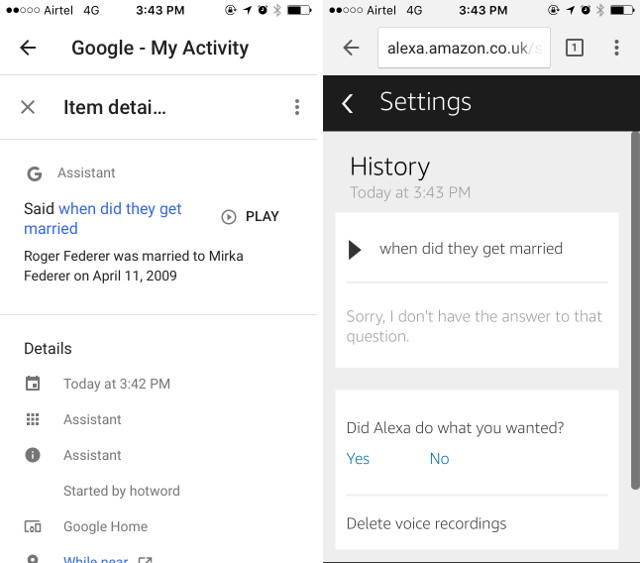 Once again, Google Home was able to give the correct result. I didn’t expect Amazon to provide any useful result, and it didn’t. No surprises there.

Since the Echo can’t keep track of context, it does a weird thing some times. Check it out: 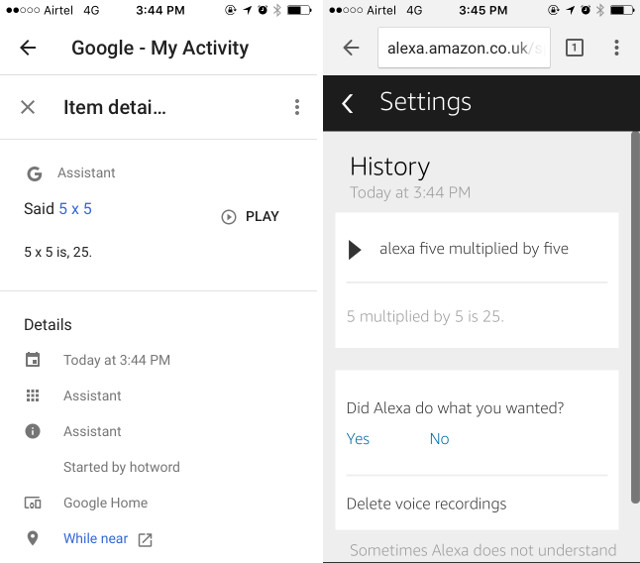 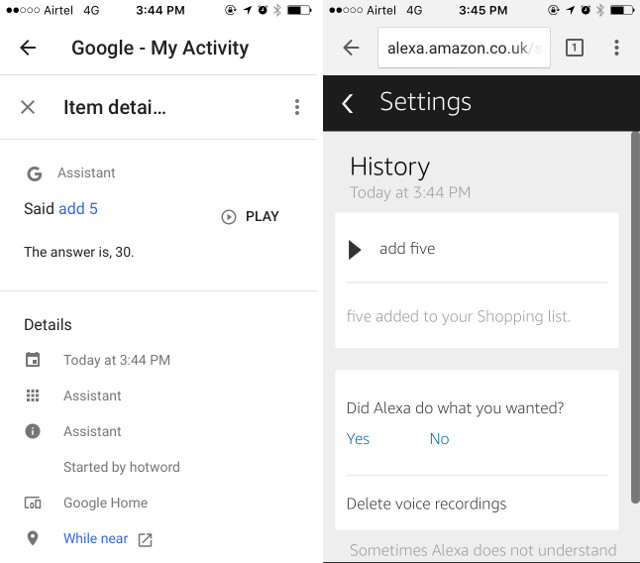 See what happened there? Since Google Home can understand context, it gave me the correct answer (30, in this case). However, the Echo took the “add 5” command to mean that I wanted it to add 5 to my shopping list. That is incredibly weird, because why would someone do that? Anyway, moving back on to the capabilities of these smart speakers

I wanted to try this one out because Google Now was able to track packages (or at least show notifications for them), and Google Assistant, being superior, should be able to do the same. 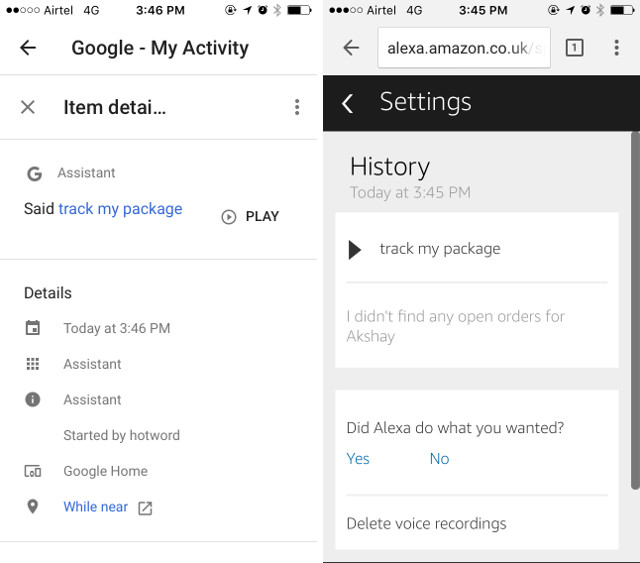 That was… disappointing. I really hoped Google Home will be able to give me at least some details. Amazon Echo, can at least track packages from Amazon, which is more than what I had hoped for.

6. Translate hello, how are you to Spanish 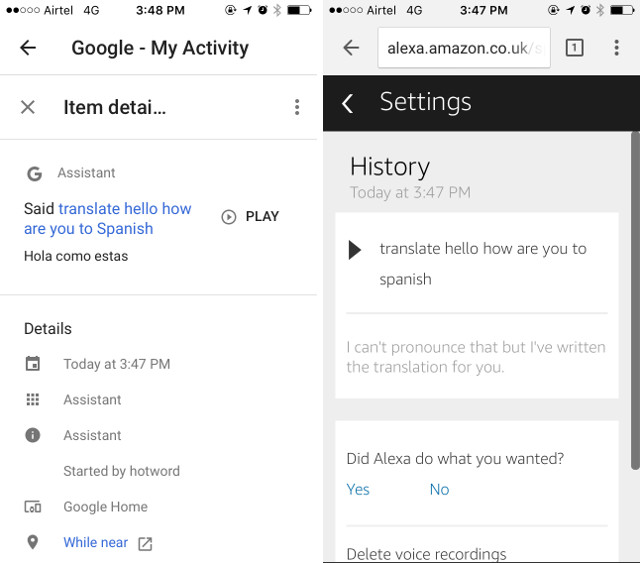 This was quite an easy command, and while both the devices were able to do it, I prefer how Google Home does it. The Echo simply writes the translation in the Alexa app, but Google Home speaks it out, which is much more useful. If I have to take my mobile out to see the translation, why wouldn’t I just use my mobile to translate it, anyway?

As much as I tell people that I use the Echo, and Home to be productive, there are times when you just want to sit back, and have some fun. Both these speakers come with games, and other fun stuff, built right in. Let’s check it out, now:

1. Alexa what do you think of Google Home 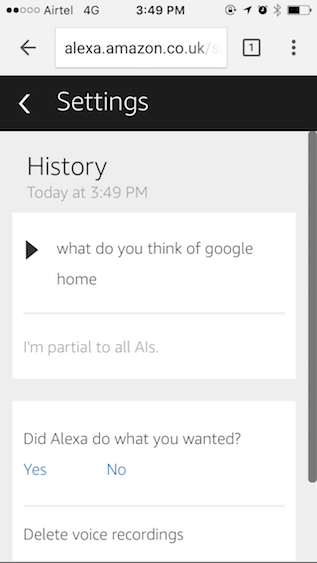 2. Hey Google what do you think of Amazon Echo 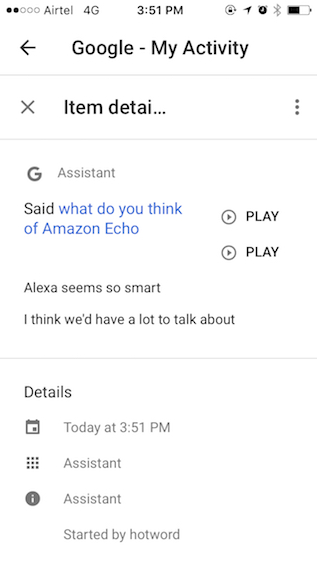 Both the assistants like playing nice, which is great. I wouldn’t want AI’s starting to dislike each other; that’s never good news for us. 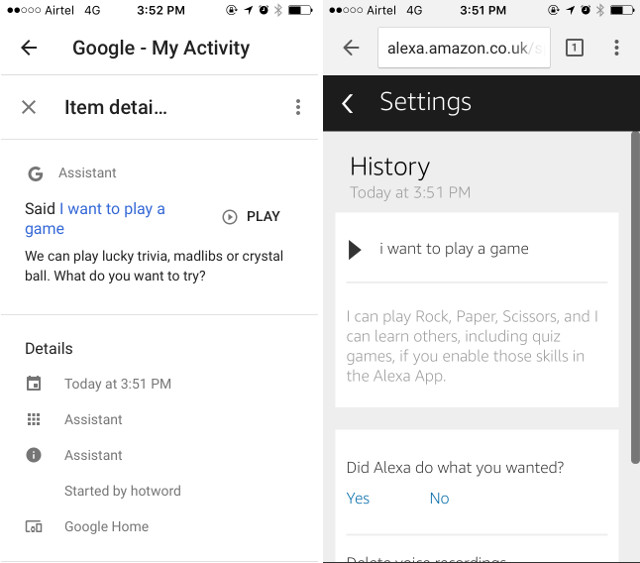 Like I said, both these devices come with games built right in, however, while the Google Home has 3 games to choose from, the Echo only comes with one. To be fair, you can enable a lot more games in the Echo by adding Skills.

This one is great. You should definitely try it out on the Google Home, or the Google Assistant in your phone. 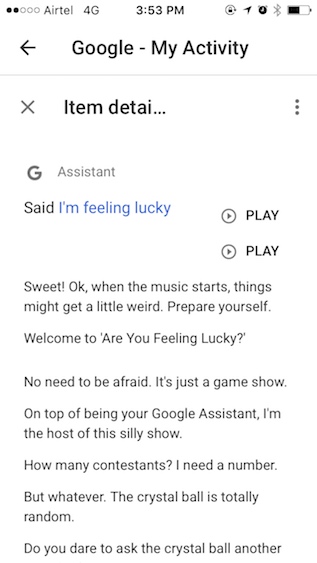 As it turns out, the Google Assistant knows how to put on a great show. You can try it on the Amazon Echo, as well, but it doesn’t do anything with this “very Google” easter egg. 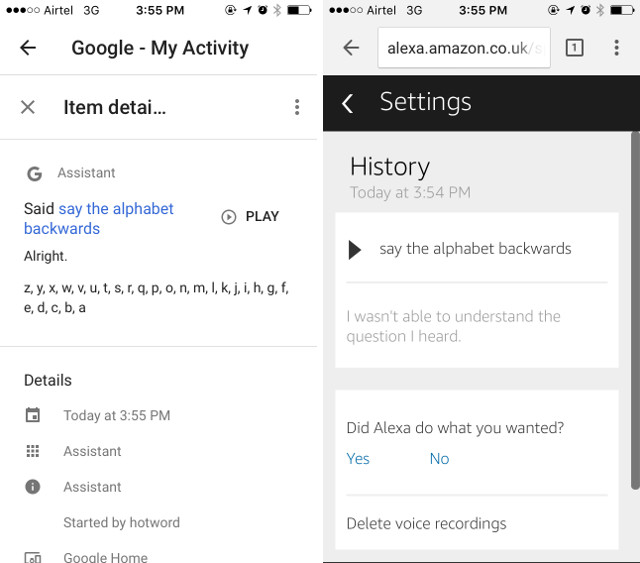 Once again, Google Home is the only one that can do this. It doesn’t really matter to the over-all capability of the device, but it’s definitely a great easter egg, and something fun to show off to your friends.

Both Google Home, and the Echo support IFTTT integration. However, the Echo only supports it in the US and UK. Google Home, on the other hand, works anywhere. Creating IFTTT recipes is easy, and I created one that welcomes me to work, and sends a chat message to my team, informing them that I’ve logged in. 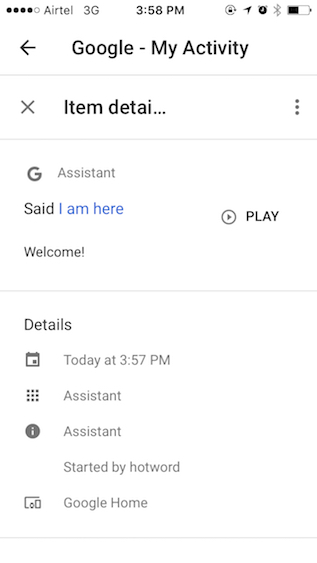 I created the same recipe for both the Google Home, and the Amazon Echo, but since the Echo only works in the US, and the UK, it didn’t work (obviously). The Google Home, on the other hand, welcomed me, and sent a message to my team telling them I’m logged in, which is perfect.

SEE ALSO: How to Set Up and Use Google Home Outside US

It is quite obvious that both these devices are pretty great. Personally, I would give the edge to Google Home. The one complaint I have with Google Home (no to-do list support), is one that can be easily fixed with an IFTTT recipe between Google Home, and Todoist. Speaker-quality wise, they are both awesome, again. Obviously, they won’t replace your dedicated audio system, but they’re pretty great, anyway. I prefer the deeper bass of the Google Home, but a lot of people find the Echo’s clearer, and louder treble way better than the Home’s. So, yeah, it’s personal preference, in the end.

Let me know your thoughts on the Google Home, and Amazon Echo. Also, if you know of some fun commands, and easter eggs that you want to share, feel free to do so in the comments section below.