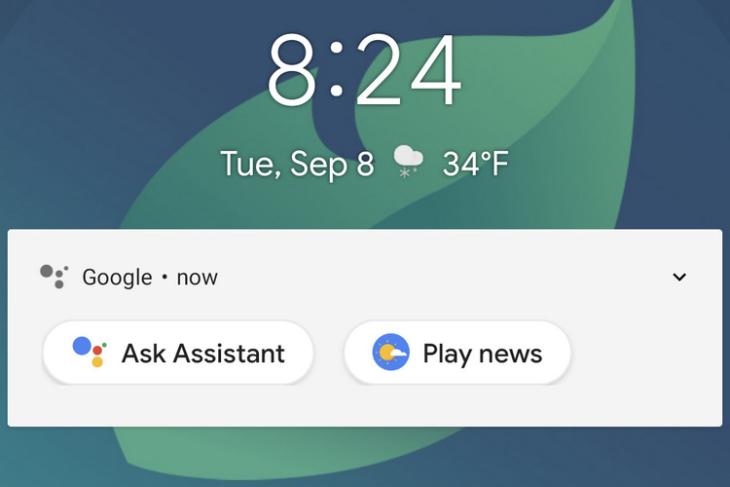 Google has reportedly started testing new lockscreen notifications with command shortcuts for the Google Assistant. That’s according to posts on social media sites and online message boards, which claim that the notification is silent and only appears when the phone is locked. Thankfully, these are not persistent notifications, and users can dismiss them from the lockscreen itself.

According to reports, the notification always comes with two options (see image above). The first one is ‘Ask Assistant’, and it remains the same in all cases, while the second one varies from one situation to another. As you can see in the featured image, the second command could be something as simple as ‘Play News’. According to Android Police, some of the other commands include ‘Set Timer’, ‘Play Music’, ‘Set Alarm’ and possibly, many more.

Meanwhile, the new feature seems to be in the very early stages of development, given that reports suggests it is still fairly buggy. The layout varies from one OEM to another and, according to the report, can get a little messy on some Dark Mode implementations, including Samsung’s One UI. The report, however, claims that it works as expected on most Android skins on Light Mode.

It’s not immediately clear as to when the new feature will be available universally. However, given that Google is working extra hard to bring Assistant front and center on Android devices, it probably shouldn’t take too long for that to happen. Meanwhile, Google just launched the stable version of Android 11 late last night, and it is now rolling out to a whole bunch of Pixel, OnePlus, Xiaomi and Realme smartphones.