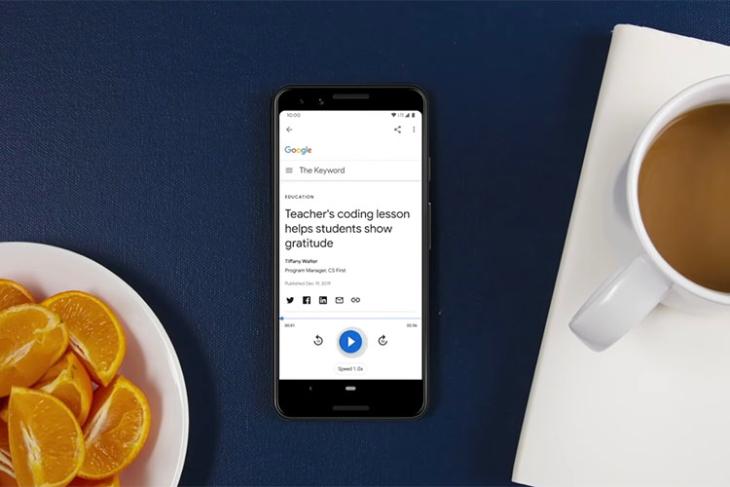 The Google Assistant is available across a number of devices in 90 different countries around the world, and Google says the smart assistant is used by over 500 million people every month. At CES 2020, the Mountain View giant has now announced new features coming to the Assistant, and among them is a new feature that allows the Assistant to read out long articles from the web, and it can do so in 42 different languages.

According to the video shown off by Google, invoking the feature is fairly simple. Users can just launch the Google Assistant when they have a web-page open and ask it to “read it”. The company has developed the feature on new voice datasets so the Assistant speaks out in more natural sounding and expressive voices, making the experience better than what is currently offered by screen readers.

While the company hasn’t specified all the languages the feature supports, Google’s blog post mentions that it will be available in English, Hindi, German, and Spanish.

Apart from that, the company says it’s working on bringing features such as text highlighting and auto-scroll to the reading mode to make it easier for users to read the text as it is being read out.

This new Google Assistant feature is just a preview as of now, and Google says the feature will be available to users later this year, on Android versions 5 and above.

Google has sent out a press release today mentioning that the “Read It” feature is now rolling out. Users can access the feature by launching the assistant and saying “Hey Google, read this” or “Hey Google, read aloud”.

Yossi Matias, Vice President, Engineering, Google said, “We are constantly working towards developing new products and features that remove language barriers and help a wide variety of people access information from the web more easily. This new feature is our attempt to make the Google Assistant even more helpful for all kinds of users across the globe.”