It has barely been a month since Fall Guys was released and it has already sold 7 million copies on Steam alone. Plus, Fall Guys has now become the most downloaded PS Plus game ever, breaking all past records. It’s safe to say, the game has gone viral. Fall Guys is currently available only on PC and PS4, but users are wanting to try out this fun-filled battle royale game on their smartphones. Since the game is due to release for smartphones next year, we bring you some excellent games like Fall Guys for Android and iOS right now. We have curated games that have similar gameplay and physics-based obstacles. So without any delay, let’s go through the list.

Games Like Fall Guys for Android and iOS (August 2020)

Here, you can take a look at all the games that are similar to Fall Guys. You can click on the link below and move to the corresponding game easily. Some games are available on both Android and iOS and some are available only on one platform.

Since Fall Guys is unlikely to arrive on smartphones anytime soon, there is Human: Fall Flat to make your experience delightful both on Android and iOS. Developed by 505 Games, it’s just like Fall Guys where you can play with hordes of contestants in a physics puzzle-platformer game. You can walk, jump, climb, slip, grab anything on your way, all the while saving yourself from enemies.

You will go to the surreal of places just like Fall Guys where vibrant color palettes and cute creatures lead the show. The only difference here is that you need to solve challenging puzzles to move forward.

But worry not, in terms of fun and gameplay, it has got lots of exciting distractions which will take you to even more secrets. So if you want to abide by the law of physics, but at the same time move forward then Human: Fall Flat is what you need.

Fall Dudes 3D is another insane game like Fall Guys which is filled with thrill and excitement. Unlike Fall Guys 60 players battle royale, here you play against 39 opponents. All you have to do is move forward and defeat the physics-based obstacles that come on your way.

The gaming environment is as chaotic just like Fall Guys where you have to break doors, run past unique obstacles, and also kick off your opponents along the way. You basically have to choose what kind of guy you want to be and reach the crowned position anyhow.

Again, just like other games on this list, make sure you don’t fall while running or else you are done. Simply put, if you are looking for a game like Fall Guys on Android then Fall Dudes 3D is your best bet.

As the name suggests, Knockout Race is an exhilarating game just like Fall Guys where the race is to reach the crown first without falling off the cliff. Similar to Fall Guys, here you can join an ultimate social party where 50 contestants run together in a frantic and fun-filled battle royale racing. As you move forward, the chaos escalates and the path becomes narrow. 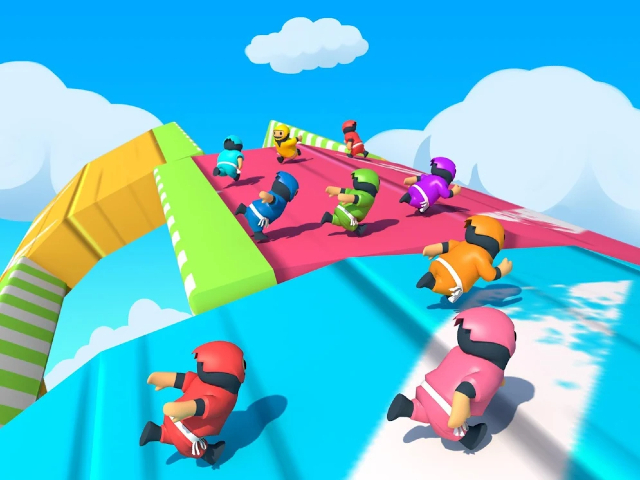 You have to jump, dash, and avoid obstacles on your way to become the ultimate last man standing. Apart from that, there are two other minigames: obstacle championship and elimination game. You can play any one of them in multiplayer mode. So go ahead and show off your reflex skills in this awesome platformer game.

If there is one game that comes very close to Fall Guys in terms of gameplay and graphics rendering then it’s Run Royale 3D. Just like Fall Guys, here you have to run with hordes of people against chaotic obstacles on your way. You have to make your way and keep moving forward. Run Royale 3D has some of the best physics-based obstacles and challenges, similar to Fall Guys’ dynamic maze. 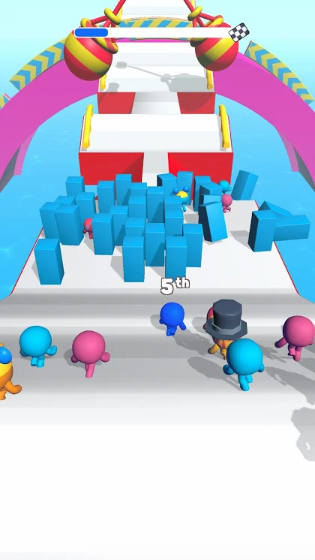 And yes, while you are running, make sure you don’t fall otherwise you will be knocked out as there is no respawn functionality. I would say, just go ahead and play this fun game and do whatever it takes to reach the first place. That said, keep in mind, the game is only available on Android, but it’s completely free to play.

Run Sackboy! Run! is an incredibly fun game that you are going to immensely enjoy while you run to death. It’s part of the LittleBigPlanet series that was released on PlayStation first and made its way to smartphones in a separate platformer package. Here, just like Fall Guys, you run as fast as you can through an ever-changing world that is handcrafted.

You have to control your motion through clutches, dash, and escape buttons, but do not stop and try to escape the Negativitron. While running, you will have to collect stickers and collectibles. You can use these rewards to customize your costume and character.

The only downside is that there is no multiplayer gameplay which can be disappointing for some. In any case, Run Sackboy! Run! is an amazing game and offers you a similar level of thrill as Fall Guys.

If you have subscribed to Apple Arcade then I would urge you to play Super Mega Mini Party. In many ways, this iOS-exclusive game is similar to Fall Guys where you have to compete in a multiplayer match.

You have 20 multiplayer mini-games where you can solve the puzzles and earn achievements and rewards. You can use these rewards to throw a Super Mega Mini Party with your friends and players from around the world who can join the party and play together. 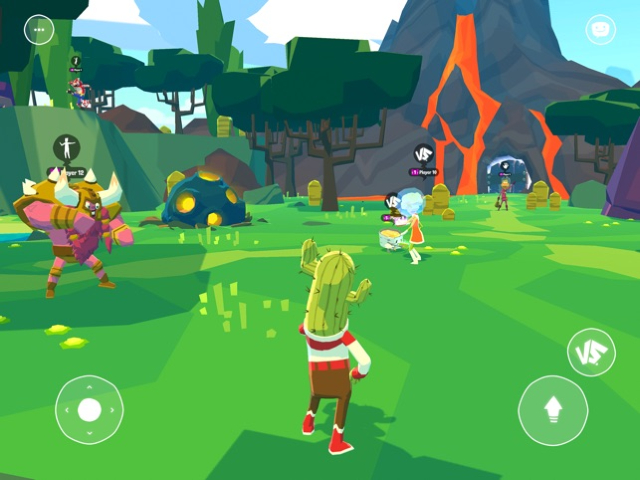 The best part about Super Mega Mini Party is that new challenges are added frequently which keeps the players on their toes. You also have the option to play in a 1v1 match which is still lacking in Fall Guys. All in all, if you like solving challenges in multiplayer gameplay then Super Mega Mini Party is the best alternative to Fall Guys on iPhone.

Gang Fight – Fun Beasts Party is another solid game just like Fall Guys and it’s available on iOS. Sure, the game does not have the best graphics, especially when you compare it with Fall Guys, but the physics-based simulation is accurate and quite unique.

You can play the multiplayer game with a maximum of 8 people and the last man standing wins the match. More than a platformer, it’s an action game with special emphasis put on game mechanics. 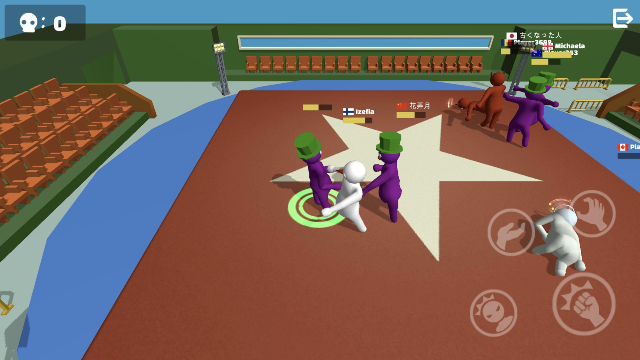 You have several fight controls like grab, lift, head attack, grovel, and more. And when you become a pro, you can even combine multiple controls and destroy the enemy in one clean shot. To sum up, if you want to play a multiplayer fighting game that has amazing physics simulation just like Fall Guys then Gang Fight is highly recommended.

Enjoy Games Like Fall Guys on Android and iOS

So those are our picks for the best Fall Guys alternative on both Android and iOS. Sure, not many games have the same level of graphics quality and physics-based challenges, but some do offer you comparable experience. I would say, just go ahead and try out these games on your smartphone. You will surely have a fun-filled experience. Anyway, that is all from us. If you found the article helpful then do comment down below and let us know.