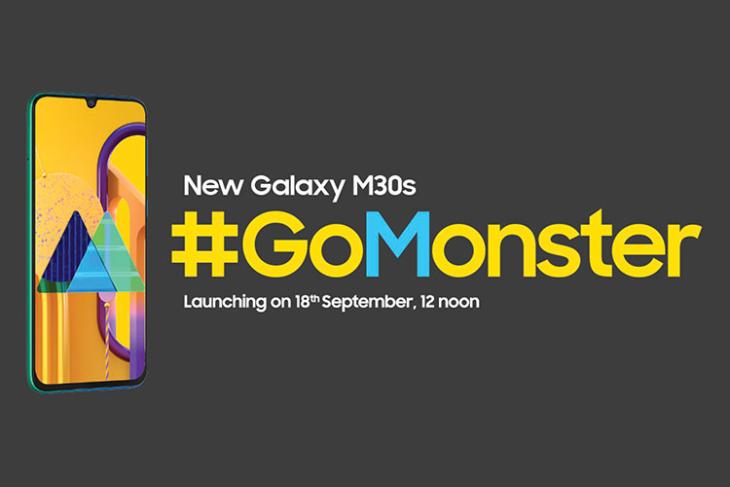 Samsung’s upcoming Galaxy M30s is now confirmed to be launching in India on September 18. The confirmation comes from an Amazon landing page for the device that specifies that the device is launching on 18th September.

The Amazon page for the device mentions that the device will come with a whopping 6,000 mAh battery (even though early Galaxy M30s leaks suggested the same 5,000 mAh battery as the Galaxy M30), which definitely sounds like more than enough juice to keep it going through the day. As for the rest of the specifications, we are expecting to see a 6.4-inch sAMOLED display with a teardrop notch up-top housing the selfie camera.

The M30s is expected to come packing the Exynos 9610 processor. There could be a 4GB and 6GB variant of the phone, but that’s purely speculative at this point. Apart from that, the phone will come packing a primary 48MP rear camera according to leaks and rumours. There’s currently no information about the selfie camera on the phone, but if the Galaxy M30 is any hint, the M30s might come with the same 16MP selfie shooter inside that teardrop notch up front.

The Amazon page for the phone shows off a bunch of camera samples from the phone, including typical wide-angle shots, portrait shots, and what looks like an ultra-wide shot as well, so we can expect the phone to have a telephoto and an ultra-wide angle lens on the rear accompanying the 48MP primary shooter.

The Galaxy M30s will launch on September 18, at 12 noon in India, so stay tuned for more updates about the phone including its pricing and availability in the market.

Check out the Galaxy M30s on Amazon