Remember the days how Samsung’s Galaxy series started? How it entered the market of smartphones and rose to fame with the Galaxy Pop and the Galaxy Ace devices. Ever since then, the company has moved on to the flagship offerings and is doing remarkably well. In fact, it is one of the few companies that actually bring something unique to the table every time they launch a flagship device. However, in that quest, they had left the budget market open for Chinese brands to come in and take over.

Now, the South Korean giant has decided to once again take over the budget market as well, and go head to head with the giants that are Xiaomi and Motorola. Priced at Rs. 18,990 is Samsung’s newest entrant into the market, the Galaxy J8, which packs in an interesting choice of hardware for its price. But, is the device good enough to help Samsung reclaim the throne? Let’s find out, as we review the Samsung Galaxy J8:

Before starting off with the actual review of the device, let’s discuss the hardware of the Galaxy J8. The Samsung device comes with a Snapdragon 450 but plenty of RAM with 4GB. Here’s a detailed look at the specs of the Samsung Galaxy J8:

Now that we’ve discussed the specs, let’s get on with the actual review of the device.

The Samsung Galaxy J8 comes in traditional Samsung white packaging, with plenty of stuff inside. The box has almost everything you’d expect from a device at this price point, and then some, including: 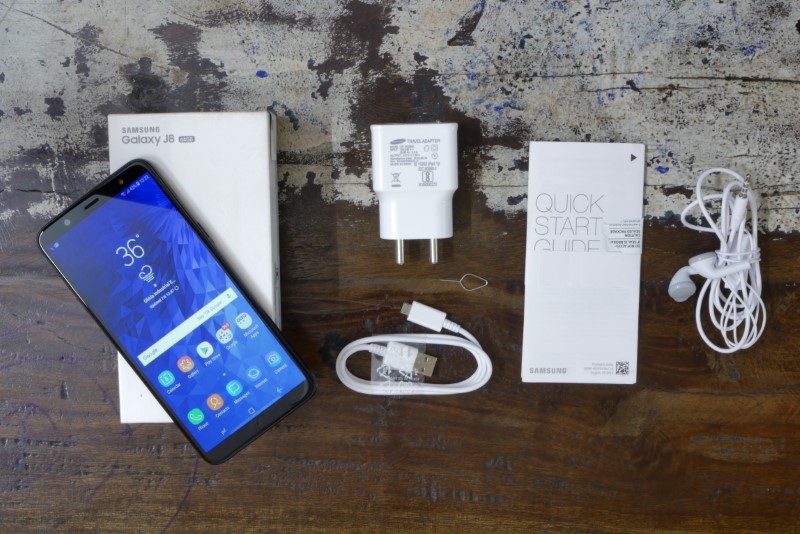 Generally, I like to combine the design and build quality sections, but this time around, let’s first talk of the design solely, while I promise to get to the build quality in a while. As far as the design goes, the Samsung Galaxy J8 is pretty well designed. The front of the design looks similar to the token design for any device in that price bracket. 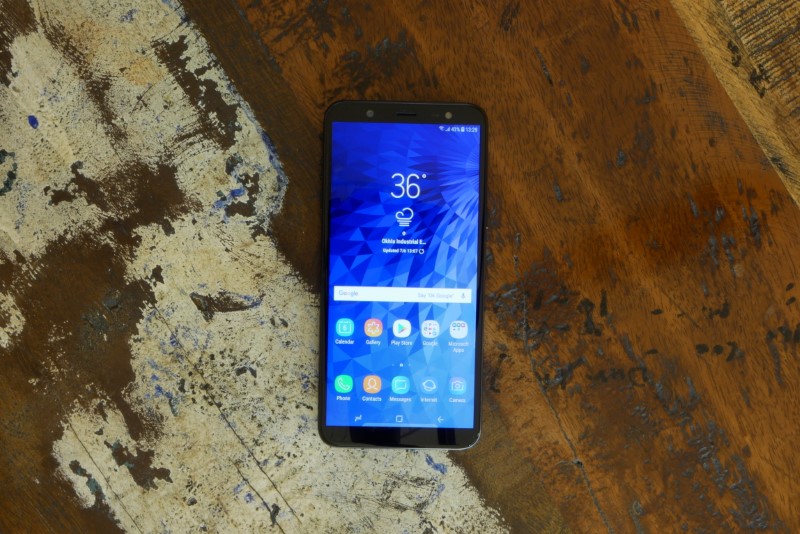 As for the back, the Galaxy J8 seems like a cheaper variant of the Galaxy S9+, featuring the same dual-camera location followed by the fingerprint scanner below and the LED flash on the right side, all without the glass body. Instead, the body is made up of plastic, which is to be expected, considering the price point. 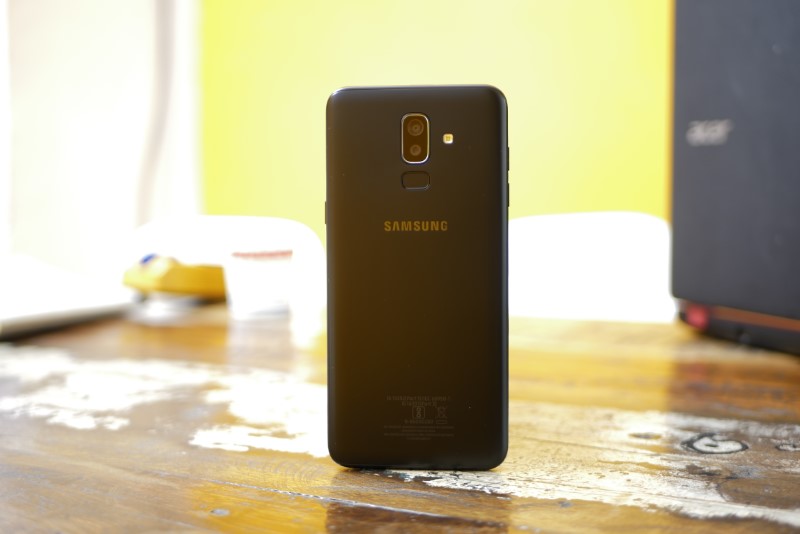 The left side of the device houses the volume rockers followed by the microSD card slot and the Dual-SIM card tray. On the right side, you get the speaker grill followed by the power button. And lastly, on the bottom, we get the microUSB port accompanied by the 3.5mm audio jack. The buttons are well located, and while it isn’t totally meant for one-handed operation, one can still pretty much use the device easily without much hassle. 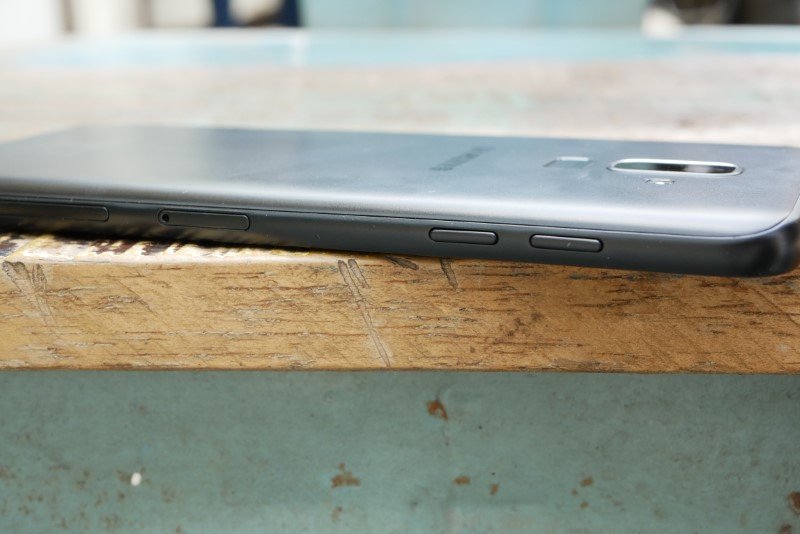 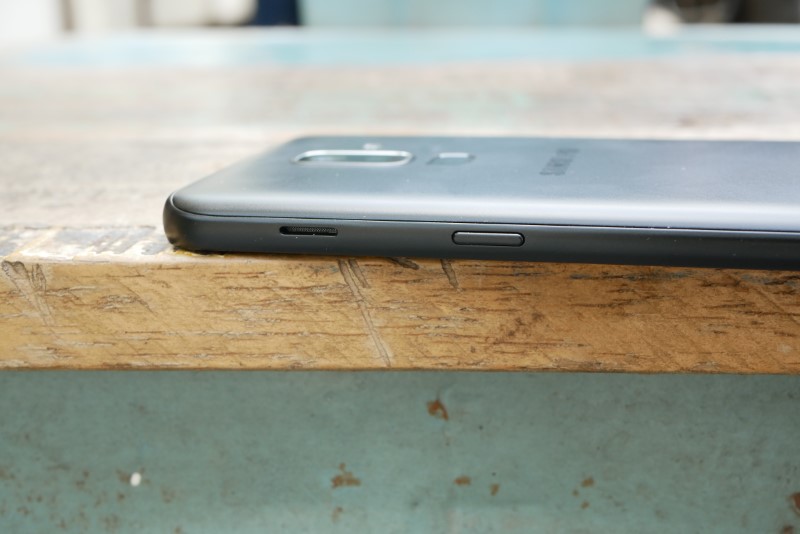 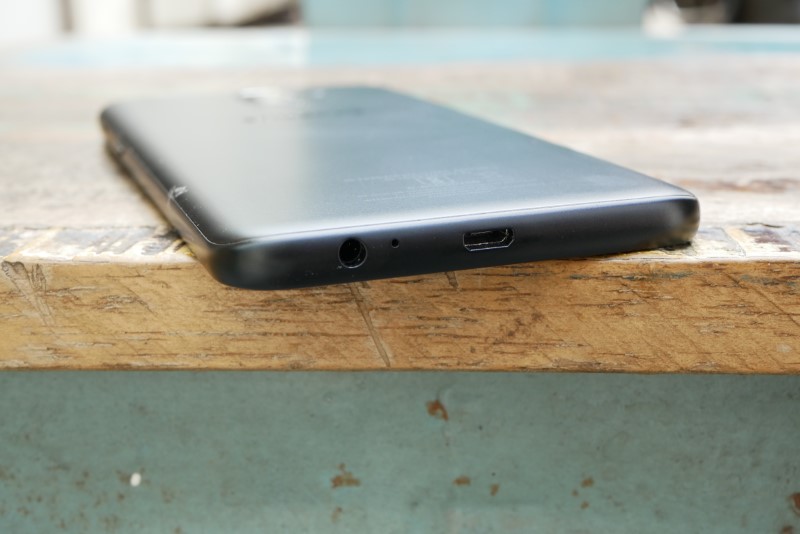 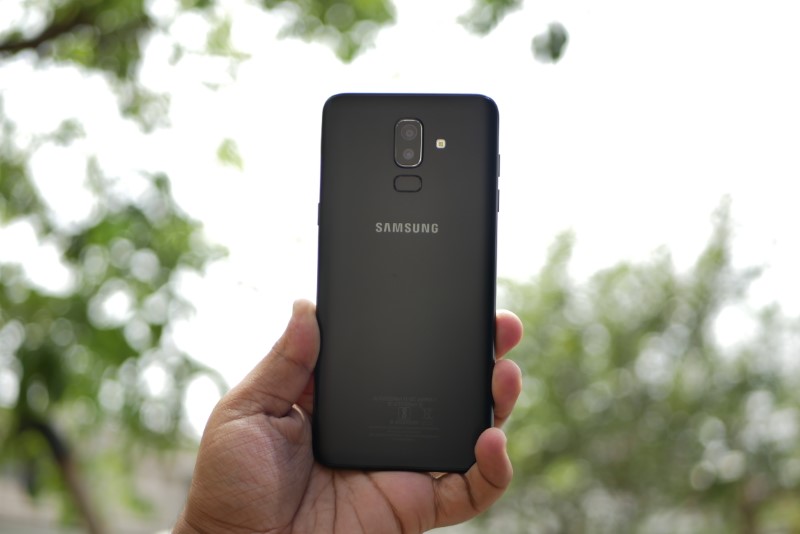 Bottomline, even though the Galaxy J8 has a plastic body, I admire its design.

The Samsung Galaxy J8 packs in a 6-inch HD+ AMOLED display with a resolution of 720 x 1480 pixels and 274 ppi density. Samsung calls it the Infinity Display, but there are a slight amount of bezels, which, to be honest, do take away the praises of the Infinity Display. 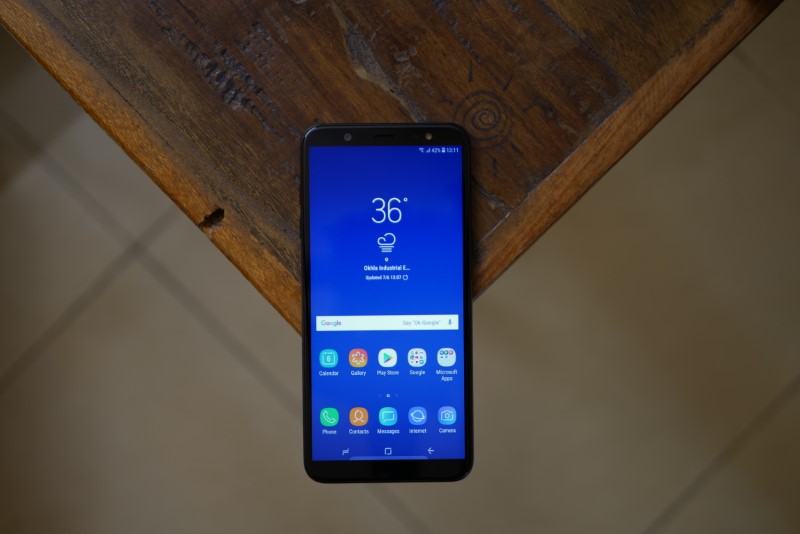 As for the colors, they do seem nice, albeit a little saturated. Thanks to the AMOLED panel, the blacks are deep, and most things look life-like on the screen. However, despite having a 6-inch display with an 18.5:9 ratio, you’d expect the device to have a good display, right? Sadly, the Samsung J8 comes with a 720p display with just 274 ppi density. It is a Super AMOLED display, but the low pixel count dampens the display. 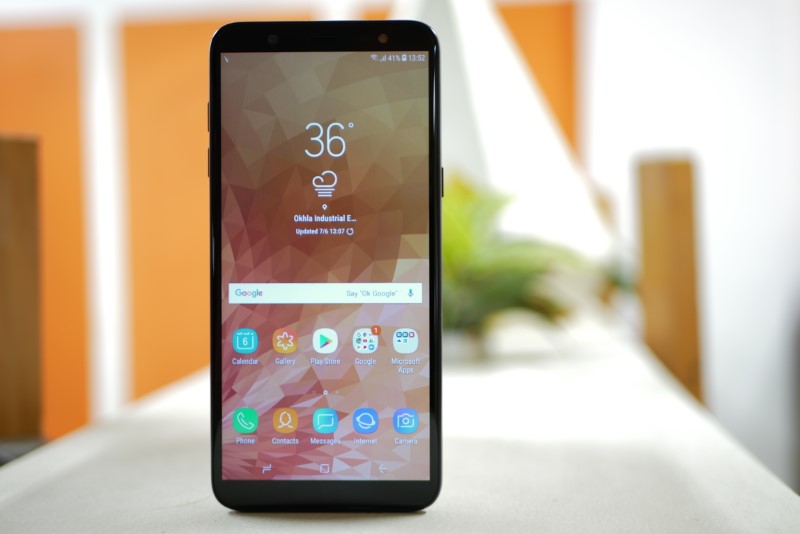 You won’t really find phones with an AMOLED display in this price range, so that’s a positive for the J8 but ya, I would have liked a higher resolution display.

The Samsung Galaxy J8 comes with the same Experience UI skin that its mid-range and flagship phones come with. There’s Experience UI 9.0 here on top of Android 8.0 Oreo and it packs in a lot of features. There’s Bixby, Face Recognition, which works fine and there are features like themes, game launcher, Samsung Pay mini, Samsung Cloud, games launcher, one handed mode and more.

So yes, it’s the Experience UI we know and it’s feature packed but if you like i or not, it’s pretty subjective. I will always prefer stock Android over any skin but if you are okay with the Experience UI, then the Galaxy J8’s user experience will not be a problem for you. Having said that, how does the Snapdragon 450 handle Experience UI? 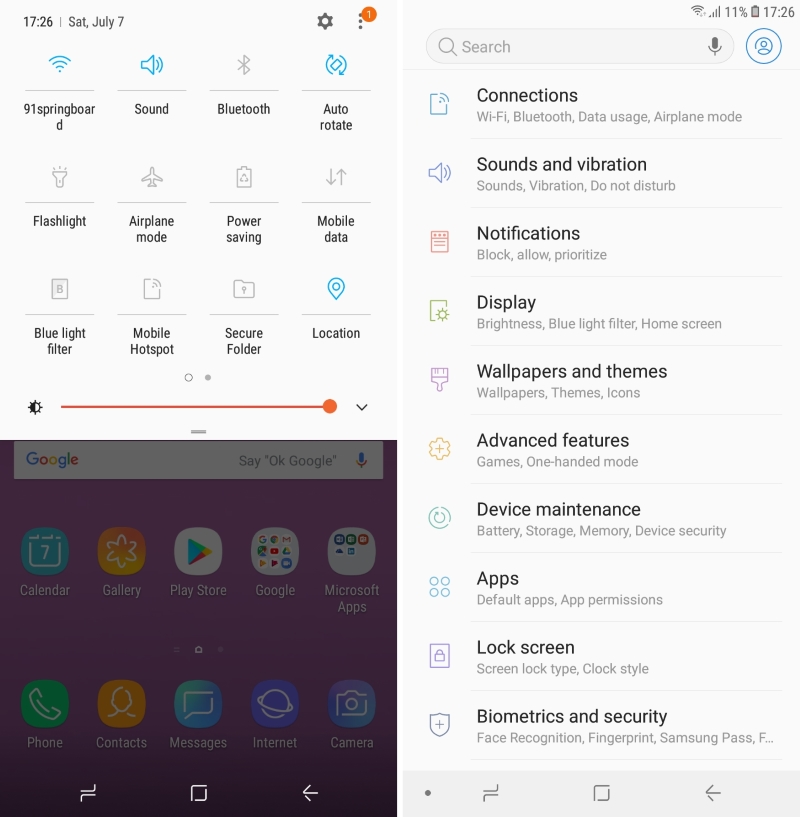 The inclusion of a Snapdragon 450 processor in the Galaxy J8 is something that surprised me and that’s because most phones with a Snapdrahon 450 are priced below Rs. 10,000 and here, we have the J8 at almost Rs. 19,000. Well, suffice to say, the Snapdragon 450 does not handle the feature packed Experience UI all too well.

The custom skin on top of Android is a lot to take for the Snapdragon 450, which is, despite its advancements, still a low-power mobile chip. Moreover, the Samsung Experience 9.0 has a ton of unnecessary and sluggish animations, that make the device look slower than it really is. Yeah, there’s 4GB of RAM on this thing, but with a Snapdragon 450, I hope your expectations from this device aren’t that high.

The device proves to be decent enough for everyday use but lags almost everywhere. Normal day-to-day apps such as WhatsApp and Facebook are handled by the device easily. There are stutters in between, and once I even experienced an app crash, but nothing too serious. However, despite having 4GB of RAM, the J8 can’t multitask that seriously, thanks to some aggressive RAM management.

Also, as far as heavy duty apps and games such as PUBG are concerned, the device cries. By default, the settings are set to the lowest, and despite that, there are lags and stutters during the game. 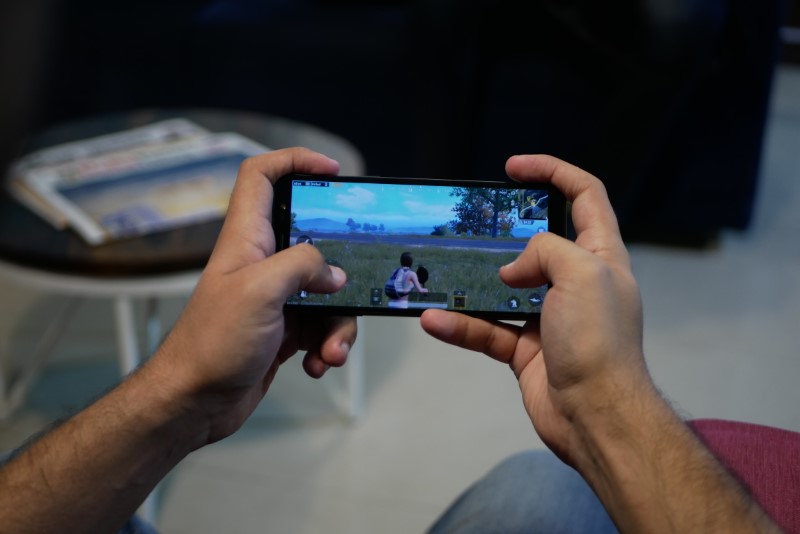 As for benchmarks, it’s a Snapdragon 450, so I didn’t really expect anything great. The Galaxy J8 scored a mere score of 70,791 on Antutu Benchmark and attained a multi-core score of 3,818 on GeekBench. 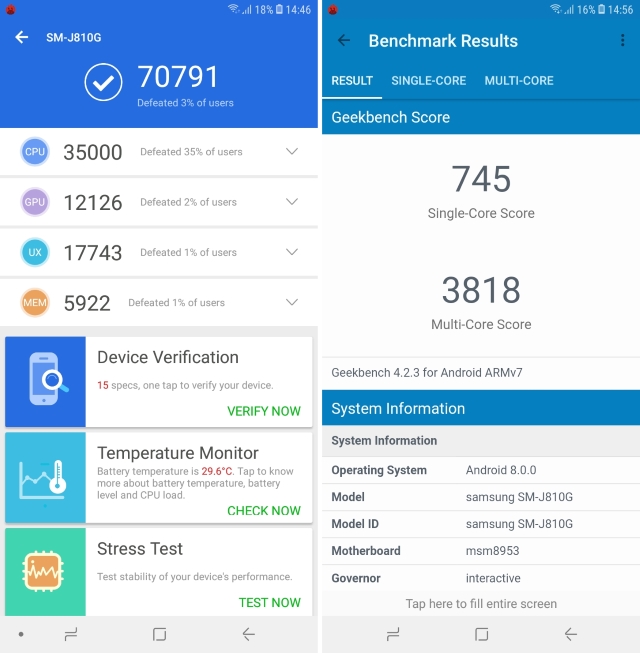 All in all, for your normal day to day activities, the device fares decently. And well, that’s it. But you need to ask yourself is the level of performance justifiable at this price?

Budget devices aren’t known to perform that well when it comes to camera performance, but that trend seems to have changed in the past 1 or 1.5 years. Now, devices such as Mi A1, the Redmi Note 5 Pro, Zenfone Max Pro, Honor P20 Lite, and more are offering camera performance which is able to compete with the some of the best in the business. But is the camera on the Samsung Galaxy J8 that good? Let’s find out.

The Samsung Galaxy J8 packs in a dual 16 MP (f/1.7, AF) + 5 MP (f/1.9, no AF) camera setup, which, on paper, should do decently. As for the real-life performance, considering the price point, I wasn’t really disappointed. 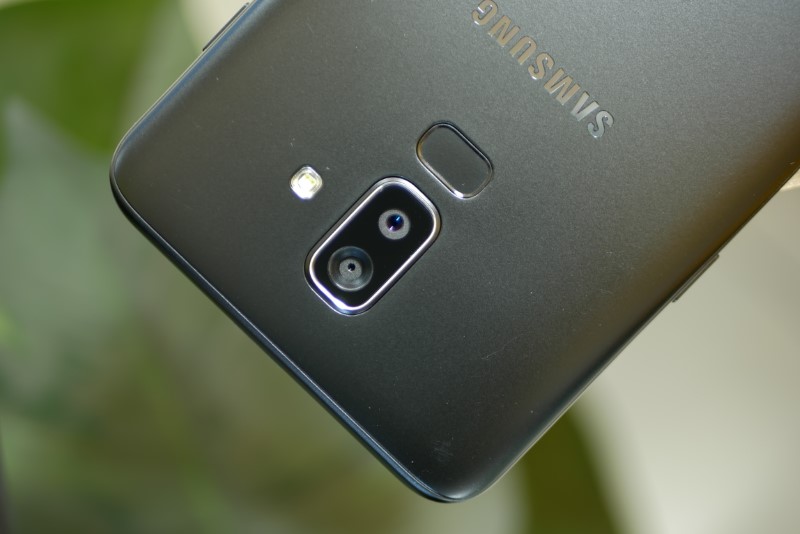 Coming to the front, the Samsung Galaxy J8 sports a 16 MP, f/1.9 sensor along with LED Flash as well. Performance wise, the shots captured are once again good. In fact, this time around, the colors seem to be slightly natural, which is something I always prefer. The portrait mode works well too, but the edge detection is once again an issue. However, the images are slightly soft and there is a lack of overall detail and structure in the image.

Considering the flow of this review, the cameras were a breath of fresh air. They are not excellent, but they are pretty good.

Considering the call quality, I never faced any issue with the Samsung Galaxy J8. Calls sounded clear on both sides as the phone brings very good noise cancellation. 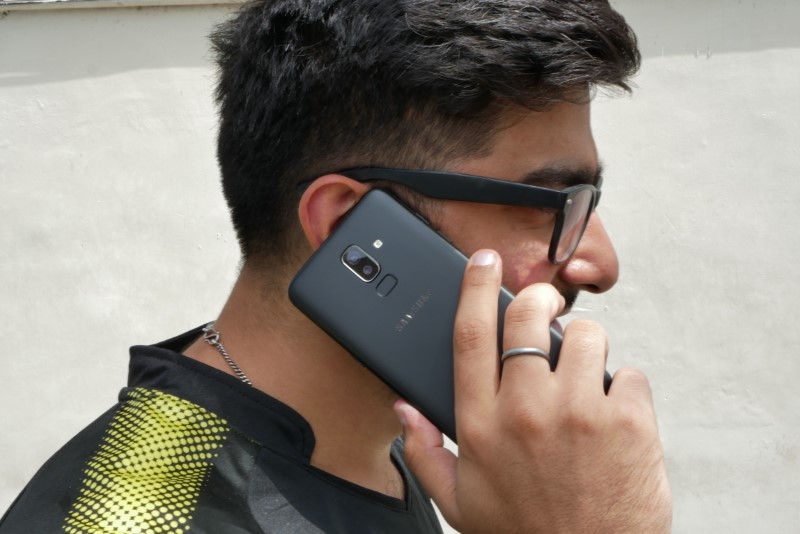 That being said, the placement of the speaker is rather cumbersome, and while it shouldn’t have any major issue in calls, I found the volume levels in speaker mode to be rather lower as opposed to normal media playback.

The Samsung Galaxy J8 packs in almost all the ports that you’d want from your smartphones, such as a micro USB port and the 3.5mm audio jack. There are still plenty of smartphones in this price bracket that still sport the micro USB port, but it would have been nice had Samsung gone with the faster and more modern USB Type-C port.

However, one thing I do appreciate about the Galaxy J8 is that it uses a dual-SIM card tray along with a dedicated microSD card slot, so you always get the best of both worlds.

The Samsung Galaxy J8 packs in a non-removable 3,500mAh battery, which seems just about right. Thanks to the power efficient Snapdragon 450 onboard along with a Super AMOLED display, I was able to get a decent amount of battery life with the device. Even with heavy use, including gaming, you’ll still end up with at least 30 percent battery by the end of the day. 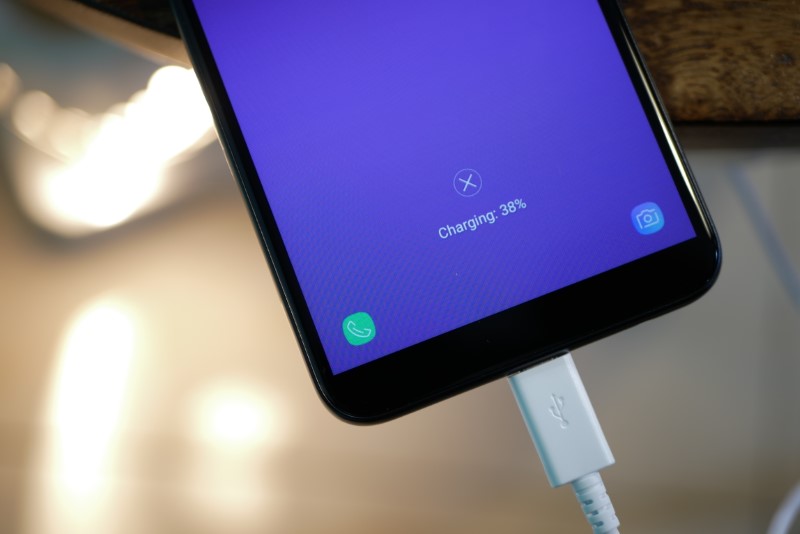 Unfortunately, though, things get bad once you need to top things off. The 5V/1.55A charger included with the Galaxy J8 charges the device slowly, taking an hour to charge to 60% with the device turned off. What’s more is that the device heats up a lot while charging, which is something I personally dislike.

Samsung Galaxy J8 Review: Should You Buy It?

At 19K, the Samsung Galaxy J8 is hard to recommend. Sure, the device looks good, packs in decent cameras and has an AMOLED display but the other phones in this price range are simply better. There’s the Redmi Note 5 Pro and ZenFone Max Pro, which bring faster processors, better displays and more premium designs.

Well, to conclude things, you can go for the J8 if you want a Samsung phone with an AMOLED display, which by the way is a 720p display, and good cameras but you need to keep in mind that the J8 brings average performance and the design could have been more premium, keeping the price range in mind.

All in all, you can get better performing devices at much cheaper prices. For instance, you can buy the Redmi Note 5 Pro or the Asus ZenFone Max Pro M1, that pack in a Snapdragon 636 along with 4GB of RAM and are available for just Rs. 14,999 and Rs. 12,999 respectively.

Samsung Galaxy J8 Review: Could Have Been Better!

Samsung produces some of the best mobiles in the market today, but that is if you look at the flagship models. The current offerings from the company in the budget segment are underpowered and overpriced, as compared to its competition. The design and the camera of the device are pretty good, but apart from that, it is hard to justify the Galaxy J8’s cost, considering other manufacturers are shipping devices with Snapdragon’s 600 series which perform way better than how the J8 does.

The Samsung Galaxy J8 offers a decent build quality and camera performance, but comes with a price tag that is hard to justify.