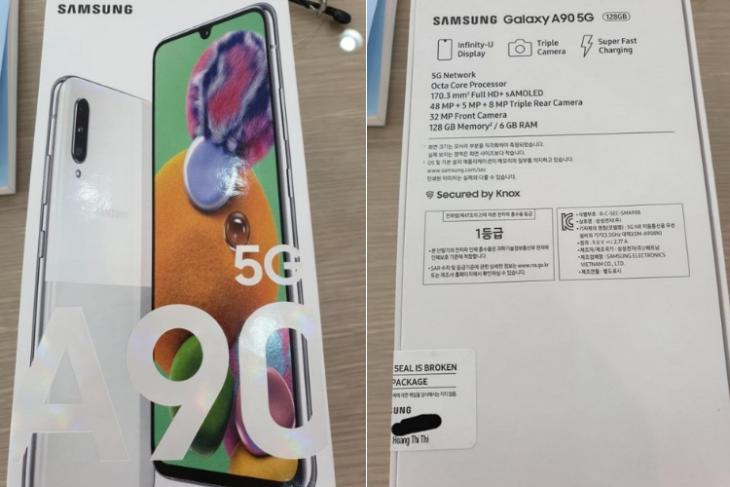 Samsung has already revealed that it is working on a new A-series smartphone, with 5G support, earlier this week. Though mistakenly, we now know that the Galaxy A90 5G has been in the works and should be coming soon. Evan Blass has further given credibility to this rumor by tweeting out the name of the device, i.e Galaxy A90 5G. However, we have since also witnessed an official-looking poster and the retail box for this smartphone leak online.

The leaked posted attached below gives us a first look at the Galaxy A90 5G smartphone. Galaxy A90 5G could feature a dual-tone finish on the rear and an Infinity-U notch (waterdrop notch) on the front. The display size is expected to be 6.7-inches, with a Full-HD+ resolution and a Super AMOLED panel.

No, the Galaxy A90 5G does not bring along any crazy antics like the sliding-cum-rotating camera on the Galaxy A80 – which launched in India earlier in August. It will pack a triple camera setup, whose specifications have now been confirmed via another leak – the retail box whose picture you see attached at the top.

Yeah, ever since news of Samsung launching the Galaxy A90 5G has hit the Internet, the leaks have been rampant. The retail box confirms that the smartphone will come outfitted with a 48MP primary sensor (possibly the company’s own ISOCELL Bright GM1 sensor). It will be coupled with an 8MP ultra-wide lens and a 5MP depth sensor. You will also get a 32MP selfie camera fitted into the waterdrop notch.

Under the hood, the Galaxy A90 5G will be powered by an octa-core chipset, which has been rumored to be the Snapdragon 855 chipset and X50 modem for 5G connectivity. This will be paired with 6GB of RAM and 128GB of internal storage. The retail box doesn’t reveal the most important feature of this smartphone, i.e the battery size and 25W fast-charging support.

The myriad of leaks that are flooding the Internet right now hint that the Galaxy A90 5G launch isn’t far away. What expectations do you have on the pricing front? Tell us in the comments section below.