Skip to content
Home Reviews Samsung Galaxy A7 Performance and Gaming Review: Not for the Serious Gamer

Samsung recently launched the Galaxy A7 (Rs. 23,990) in India, a premium mid-range device that sets itself apart from other mid-rangers from the company by offering a subtle design refresh, a triple camera setup and a uniquely placed fingerprint scanner. The device packs in an Exynos 7885 SoC, coupled with 4/6GB of RAM and its performance is exactly in accordance with other premium mid-rangers available at this price point. If you’re in the market for a mid-range device and have been pondering over the Galaxy A7’s performance then allow us to help you make a well informed decision. Here’s our performance and gaming review of the all-new Galaxy A7:

As mentioned earlier, the Galaxy A7 packs in an Exynos 7885 SoC which, for the unaware, falls somewhere between the mid-range Snapdragon 636 and Snapdragon 660 processors from Qualcomm. In order to get a fair reading of the processor’s performance, we first ran the usual slew of benchmarks on the device, including AnTuTu, Geekbench 4 and 3DMark.

So, in order to check the benchmark results we installed AnTuTu, Geekbench 4 and 3DMark on the Galaxy A7 as soon as we pullet it out of the box which gave us a clear idea of how the device performs at its best. The scores delivered by the Galaxy A7 are quite in line with what you’d expect from a device of this calibre. The Galaxy A7 managed to score 122609 on AnTuTu, lagging behind the Snapdragon 660 powered Vivo V11 Pro which scored 128304, but managing to stay well ahead of Snapdragon 636 powered devices like the Redmi Note 5 Pro, the Nokia 6.1 plus, ZenFone Max Pro and the Motorola One Power. 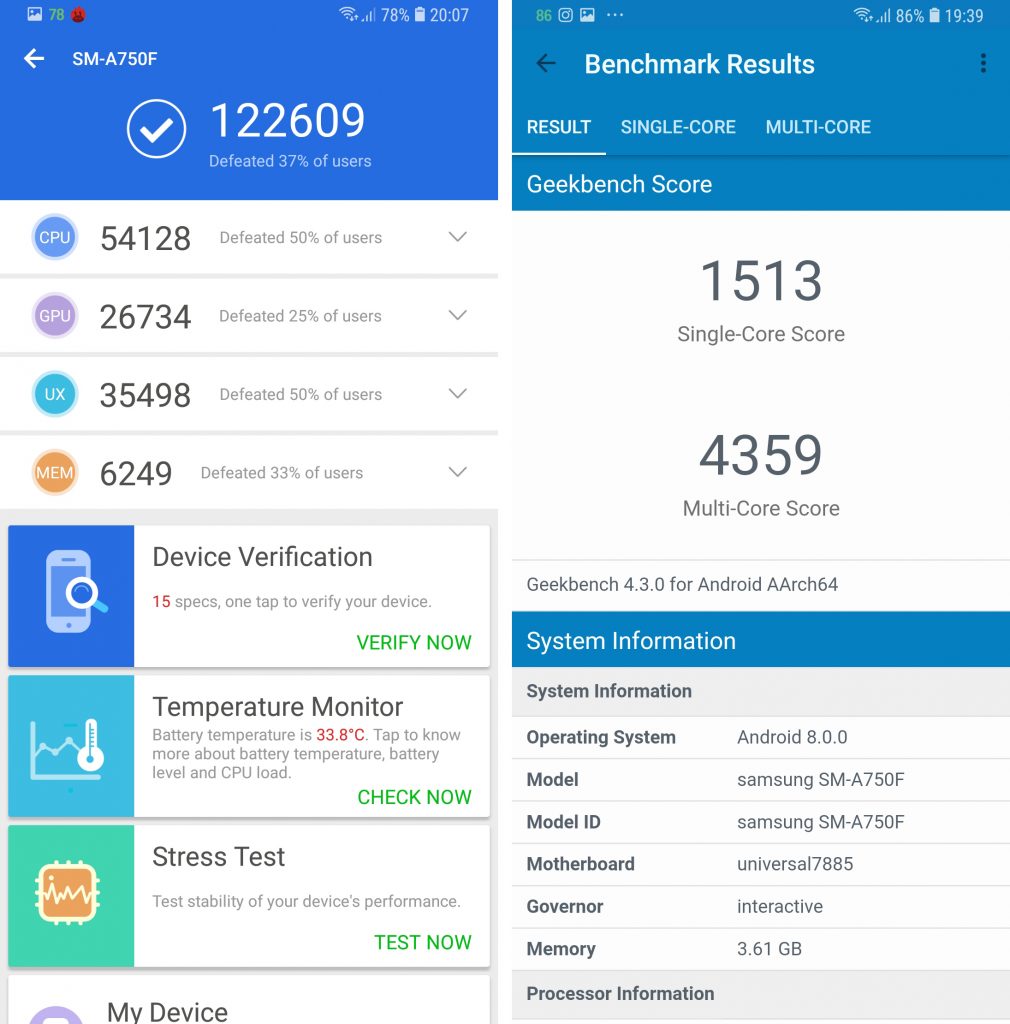 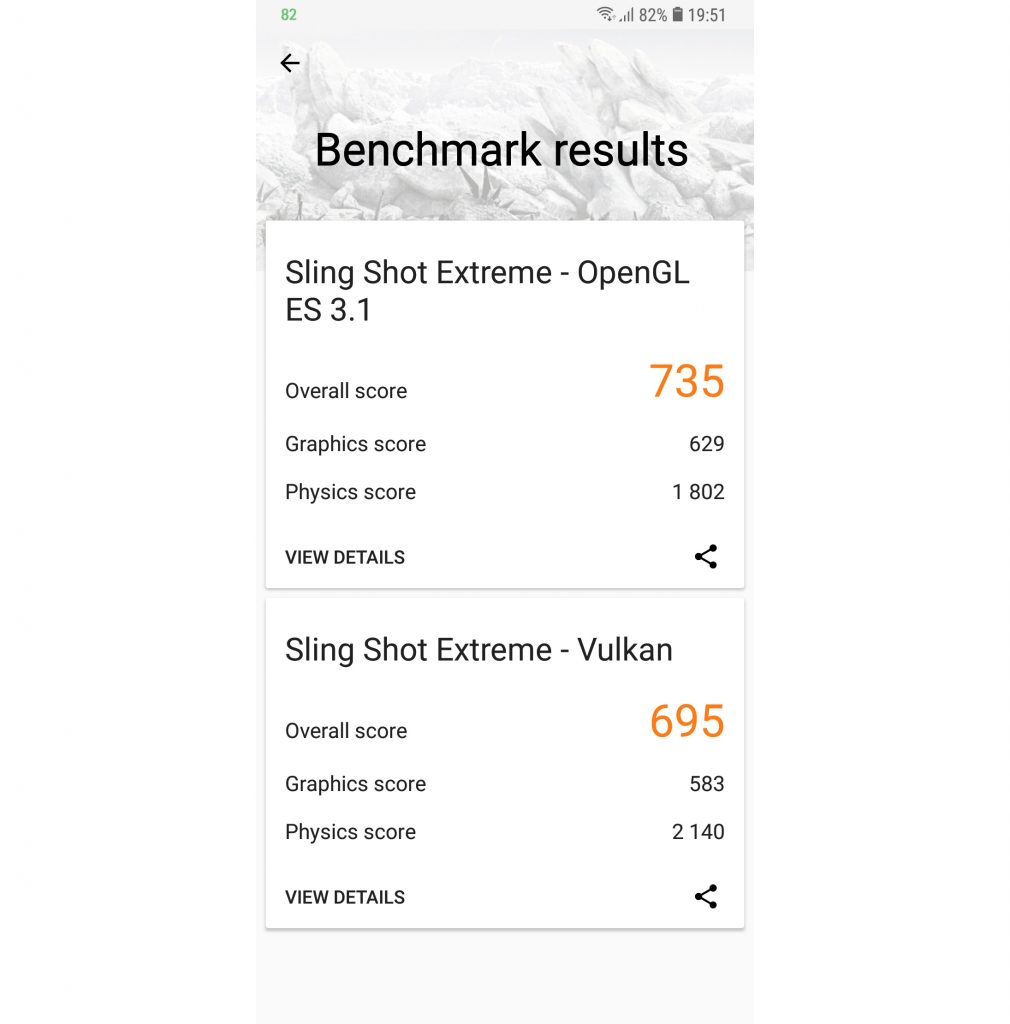 And finally, the Galaxy A7 managed to secure 735 in 3DMark’s Sling Shot Extreme – OpenGL test and 695 in Sling Shot Extreme -Vulkan, both of which are far behind the scores posted by the Vivo V11 Pro. Even though the Galaxy A7 couldn’t really match up to the performance of the Snapdragon 660 powered Vivo V11 Pro in terms of benchmarks, the difference in numbers didn’t really reflect in day to day use.

Taking into account the synthetic benchmark results we just mentioned, you’d expect the Galaxy A7 to be terrible when it comes to gaming, but that isn’t the case. While the device doesn’t necessarily perform as well as the Vivo V11 Pro in graphically intensive games like PUBG Mobile, it is capable enough to handle most Android games with relative ease. In order to test the device’s gaming performance, we played PUBG Mobile, Mortal Kombat X and Shadowgun Legends and here’s what we found:

Compared to the Vivo V11 Pro, which managed to breeze through the most graphically demanding games with ease (at medium setting, of course), the Galaxy A7 didn’t fare quite as well. In PUBG Mobile, the device automatically picked up the medium graphical preset, but I experienced stuttering and frame drops right from the get go. The biggest issue I faced while PUBG Mobile at default settings was that the device dropped frames every time I panned the camera from left to right or top to bottom, which made aiming really difficult. 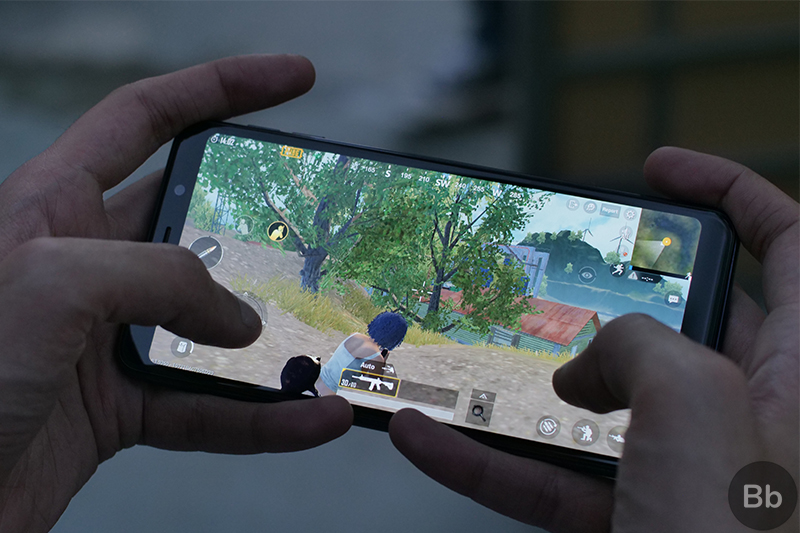 On top of that, due to the 4GB RAM, the device took far too long to load artifacts around the map, which meant that jumping out of the plane I could only see misshapen blobs of different colors on the ground right until I landed. The RAM constraints were also visible while multitasking as the device took some time to switch between heavy apps and wasn’t able to keep more than two heavy games in memory at the same time.

Since the Galaxy A7 features a notchless display, I faced absolutely no issues with games being cropped at weird places. But for some reason Mortal Kombat X on the device wasn’t properly optimized and left large empty spaces on both the top and bottom which added on to the top and bottom bezels, making the experience rather unpleasant. 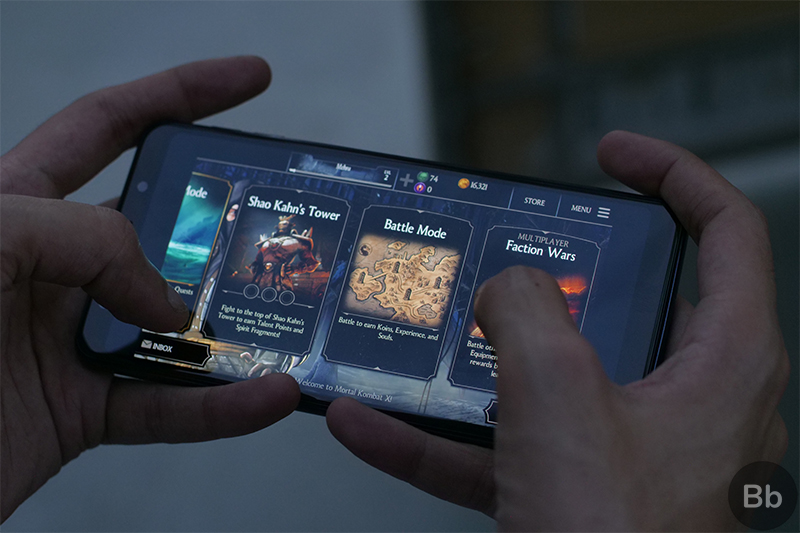 Shadowgun Legends ran perfectly well on the device with no stuttering or frame drops for the most part, but I faced the same issue where the device dropped frames while panning the camera. Once again, aiming in the game was pretty difficult because of the frame drops, especially during intense fights with too many enemies and a lot of particle effects. I faced absolutely no issue playing lighter titles on the device.

Overall, the gaming performance of the Samsung Galaxy A7 wasn’t as good as I’d expected it to be and I wouldn’t recommend the device to people who wish to play games on their smartphones. If you’re one of those people, then you can opt for the Poco F1 or the Vivo V11 Pro, both of which are great for gaming.

Samsung Galaxy A7 Performance and Gaming Review: Not the Best Choice for Gaming

Priced at Rs. 23,990, the Galaxy A7 doesn’t offer the absolute best performance that you can get from a smartphone in this price range. It doesn’t even offer decent performance in graphically intensive titles like PUBG Mobile, unless you’re okay with turning down the graphics to low. However, I faced absolutely no issues with the device while playing lighter titles or in my day to day use, which means that the device isn’t all that bad.

So, in case your workload comprises of playing graphically intensive games all the time, then you should probably skip the Galaxy A7 and opt for the Poco F1 instead. But, if you’re not one who plays too many games on their smartphone then you can definitely go for the Galaxy A7.

Samsung Galaxy A7 Battery and Charging Test: Long Lasting But Slow to Charge

Samsung Galaxy A7 Camera Review: At Par With the Competition