Asus just released the upgraded version of the ZenFone Max Pro with better cameras and 6GB of RAM. While the low-end variant of the ZenFone Max Pro M1 is a compelling device in itself, the upgraded version, which is priced at Rs. 14,999, seeks to improve upon the original by providing better image quality and better performance overall. We had the opportunity to extensively test out the new variant and at first, it doesn’t look or feel any different from the original. However, once we delved into the camera and performance testing, the differences became more apparent. But are the upgrades actually worth the extra money? Let’s find out: 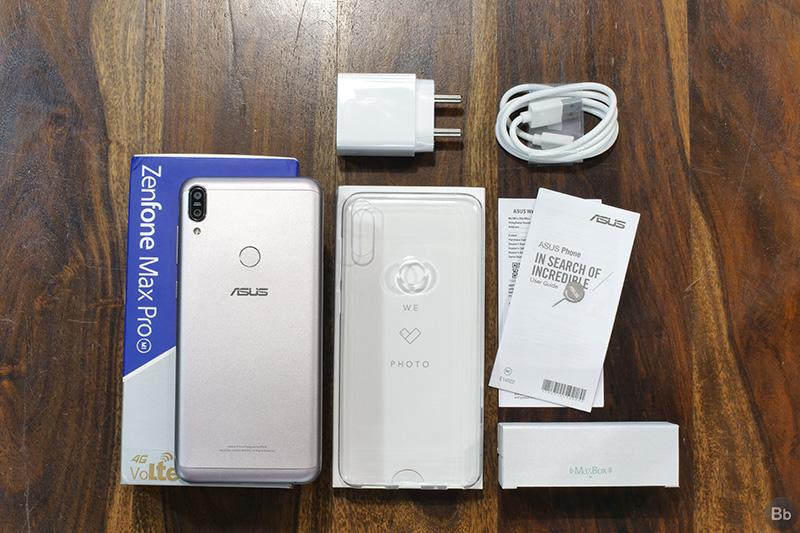 As with the previous iteration, the top-of-the-line ZenFone Max Pro M1 comes in the same box, which includes:

Asus has made no design change in the 6GB variant of the ZenFone Max Pro M1 and it has the same chunky feel to it as the model we previously reviewed. While the device does feel a bit cheap with an all-plastic shell, the grey variant of the device looks and feels a lot better than the black variant which we reviewed earlier. The color and finish of the grey variant not only gives the device a more premium look, but it is also less susceptible to fingerprints, which earns it a few brownie points.

Other than that, all the design aspects of the device remain the same. It still has the same fingerprint scanner which has been placed quite appropriately on the back, the same tactile and clicky buttons, and the same micro USB port for charging and data syncing as before. In case you wish to read a more comprehensive overview of the design and build quality of the ZenFone Max Pro M1, you can head to our original review of the device which highlights all of the device’s cosmetic aspects in detail.

Coming to the display, the ZenFone Max Pro M1 features the same 5.99-inch FHD+ IPS LCD display with a screen resolution of 1080 x 2160 pixels. Much like the previous model, the display has great color reproduction, good contrast and it looks pretty decent in direct sunlight. Interestingly though, the panel looks a bit brighter on the upgraded variant. While we aren’t sure if Asus has included a new panel on the device, the improved brightness means that the upgraded variant has even better sunlight visibility and the colors pop-out even more when using the device indoors. 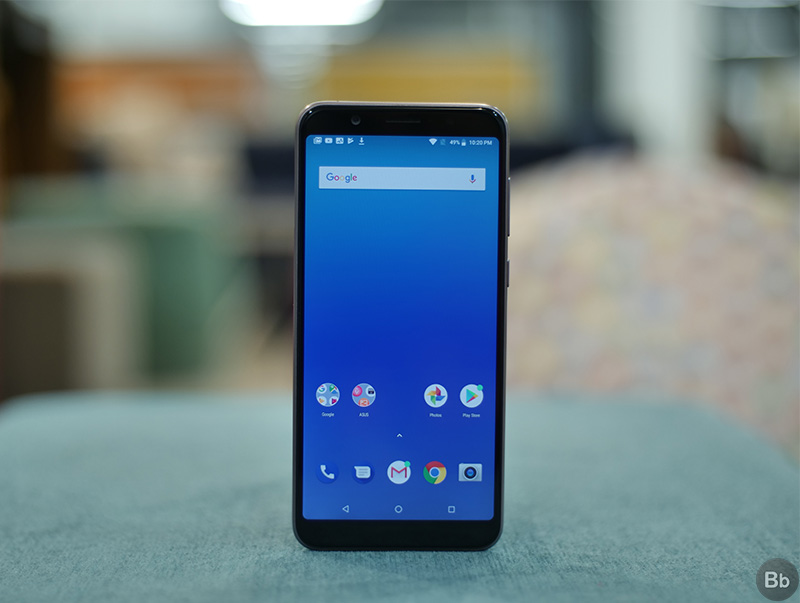 As with the older device, the display doesn’t come with Gorilla Glass protection which is a major downside. Our review unit developed a major scratch on the screen on the first day of use while we were testing its camera performance against the low-specd variant and the Redmi Note 5 Pro. In case you’re considering buying this device, we strongly recommend investing in a decent screen protector in order to keep the display from developing any unsightly scratches.

The ZenFone Max Pro M1 comes with a stock Android 8.1 Oreo with just a little bloatware, which definitely works in its favor. The device feels quite snappy from the get go and I have to give props to Asus for not including the awful ZenUI skin on this device. As mentioned earlier, the device comes with a couple of Asus apps preinstalled, including a calculator app, a sound recorder app, and an FM radio app, along with Facebook, Instagram and Messenger. These apps don’t exactly fall under the bloatware category as more often than not users tend to install these apps on their devices as soon as they get them out of the box. 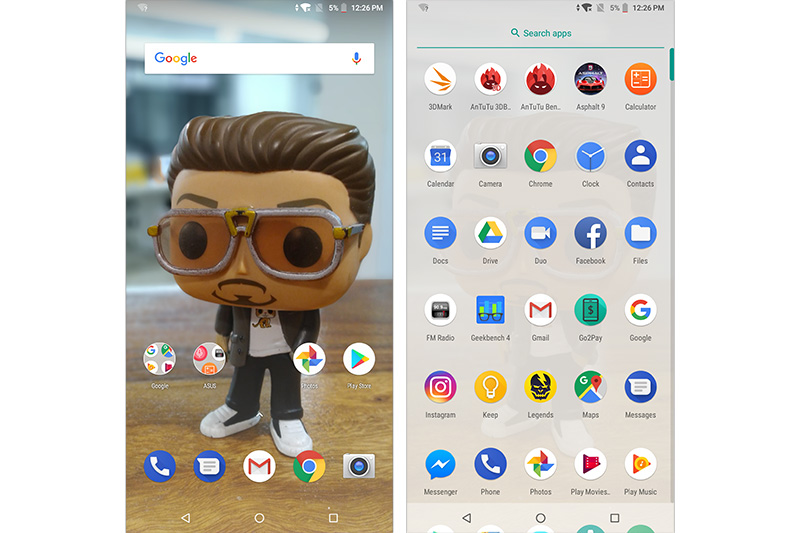 Asus’ stock Android build also comes with a couple of cool gestures, like double tap to wake or lock the device, letter gestures to open apps, and more. These gestures often come in handy and will allow you to quickly wake up the device or fire up an application directly from the lock scree. On top of that, Asus has also included the Face Unlock feature on the device, however, it isn’t as fast as other competing devices. The feature also has some trouble while registering a new face in low-light conditions and since it isn’t flawless, I’d recommend you to stick to the fingerprint sensor. 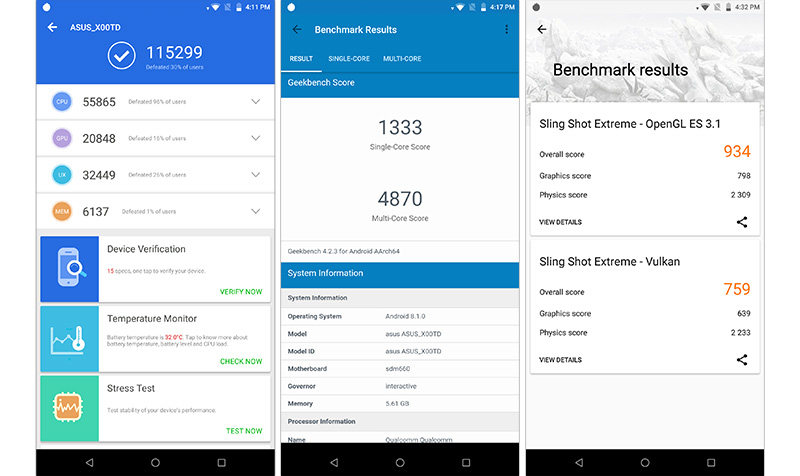 Gaming performance on the ZenFone Max Pro M1 has also improved slightly, with PUBG Mobile picking up medium graphics settings as the default option, as opposed to the low graphics settings selected by the 3GB RAM variant. Performance in other demanding games like Asphalt Xtreme, Tekken and Shadowgun Legends was also slightly better and the increased RAM also had a positive effect on the device’s multi-tasking capabilities. 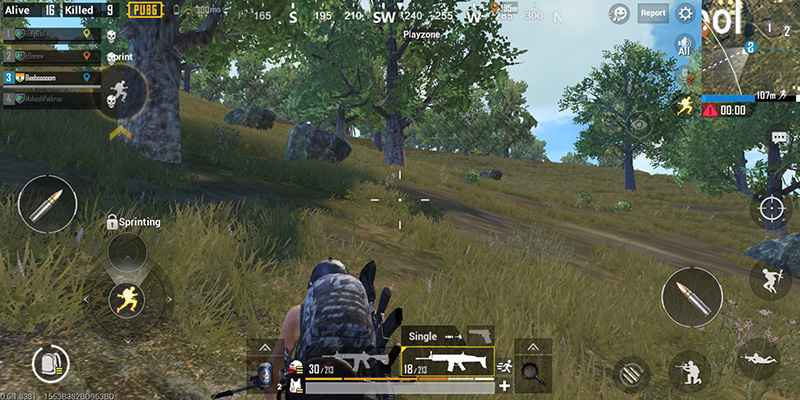 I was able to load even more apps on the device in the background and the device didn’t stutter even once. In the performance department, the upgraded ZenFone Max Pro M1 surely offers the best bang for your buck.

Low-light performance on the ZenFone Max Pro M1 is also a bit better than the previous iteration. The upgraded cameras are able to capture a bit more detail, but noise and blur is still an issue. I was also quite impressed with the amount of light captured by the device in low-light and the high dynamic range of the resulting images. For the price, the camera definitely works wonders in low-light, even beating the Xiaomi Redmi Note 5 Pro in low-light situations. Let’s take a look at some images captured in low-light:

Since the ZenFone Max Pro M1 has a dual camera setup, it features a Portrait Mode for capturing portrait images with a depth effect. Quite frankly, portrait shots captured by the ZenFone Max Pro M1 are a bit hit and miss. At times the camera was able to accurately detect the edge of the subject and give the background a very professional looking blur, while at other times the camera struggled with edge detection and blurred out parts of the subject. Just take a look at the images for yourself:

Before moving on, I would like to highlight two major issues I faced while using the camera on the ZenFone Max Pro M1. Firstly, the camera sometimes doesn’t work when opening it from the lock screen and displays a ‘Camera Module Not Detected’ toast. While I wasn’t able to accurately pinpoint what was causing the issue, it happened only while using the camera shortcut from the lock screen. Secondly, the camera on the ZenFone Max Pro M1 was terribly slow. It took a lot of time to process the images and in cases where I moved the device before the processing was completed, the images came out completely blurred and out of focus. I sure wish Asus would address these problems with software updates in the near future as they really hamper the overall camera performance of the device.

As expected, the audio quality is right at par with the 3GB RAM variant with the smartphone delivering decent call quality and a pretty loud sound output from the downward firing speaker. Since the speakers are placed on the bottom, they can be muffled quite easily, but Asus leverages the speaker placement and provides a Max-box amplifier in the package which makes the phone sound pretty great. 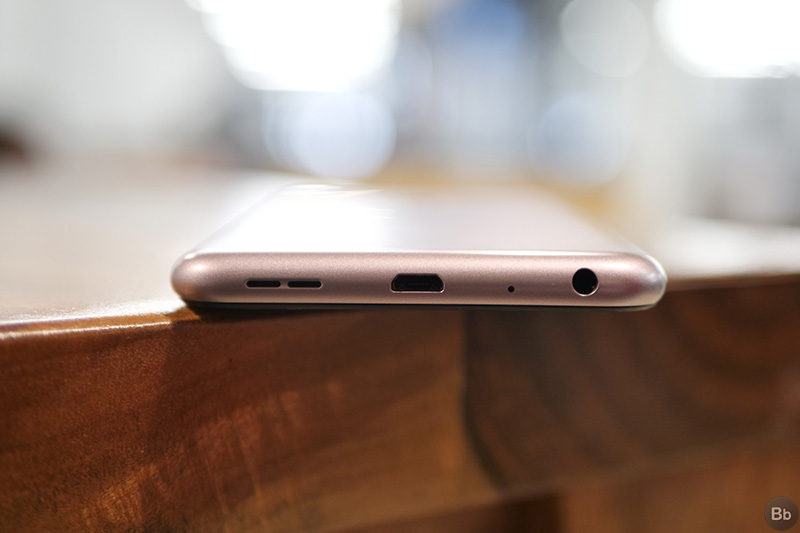 Audio output from the 3.5mm headphone jack is also pretty decent and I didn’t face any issues with the audio quality on the device. For the price, the Asus ZenFone Max Pro M1 packs in a decent speaker which sounds pretty satisfactory at max volume. In case you’re looking for a detailed review of the audio quality, you can head to our original review of the 3GB RAM variant of the device.

The upgraded ZenFone Max Pro M1 also doesn’t have any differences from the 3GB or 4GB RAM variants when it comes to connectivity options. It still has an elongated SIM tray with two dedicated SIM slots and a dedicated microSD card slot for expansion. The phone has a 3.5mm headphone jack for audio output, a micro USB port for charging and data syncing, and it supports the latest 802.11b/g/n WiFi, LTE and HSPA networks. 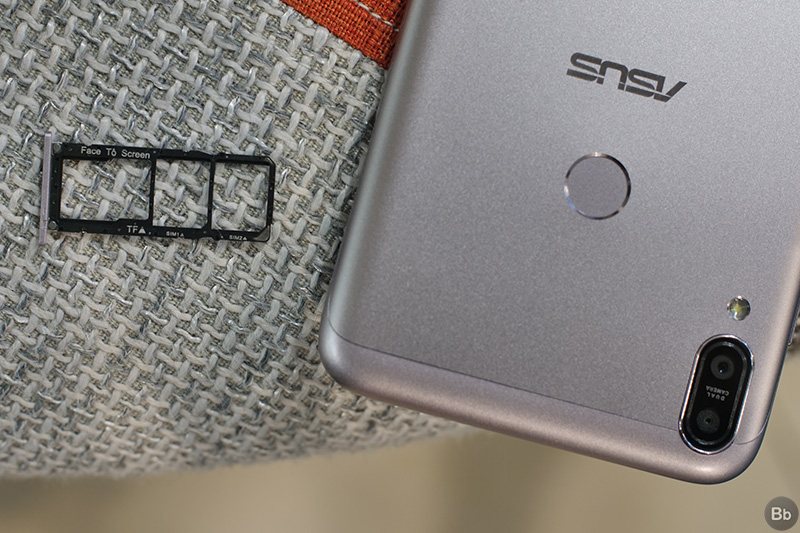 The device also features Bluetooth 5.0, which is a great addition for a device in this price range. I didn’t face any problems with the device when it comes to connectivity and I feel that you just can’t ask for more from a device at this price.

The ZenFone Max Pro M1 (6GB) retains the massive 5,000mAh battery and despite the increased RAM and better camera modules, the battery performance remains unbeatable. In my usage, the device easily lasted just over two days in regular use and even when I pushed the device to its limits, it ended the day with a decent 30 percent battery left. In my full day of extensive use, I got an impressive screen on time of over 7 hours during which I ran a YouTube video on the device for over 5 hours and 45 minutes at max screen brightness. 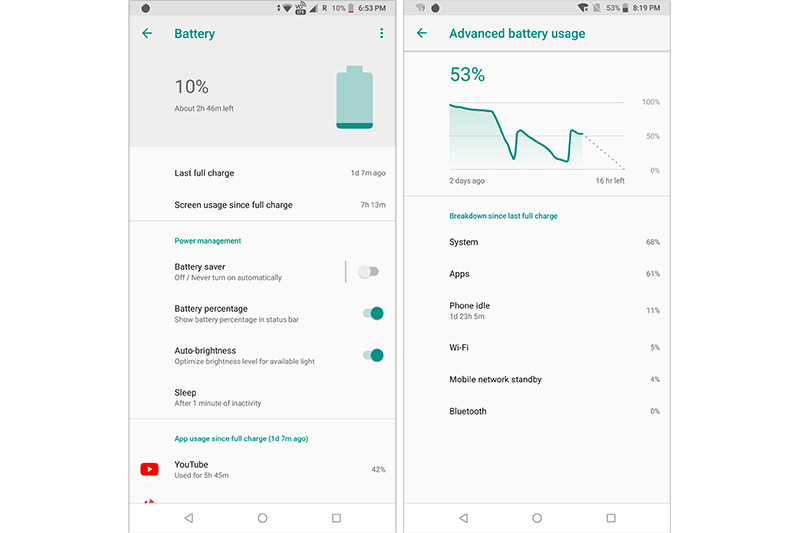 The device comes with a 5V/2A charging brick, which takes far too long to charge the 5,000mAh battery when compared to other smartphones that come with fast charging support. The device took well over 2 and a half hours to get from 10 to 100 percent, which isn’t quite ideal. However, I wouldn’t want to hold the charging times against the device because of the fact that it packs in a 5,000mAh battery and you’d have to charge it less often than other smartphones in this price range.