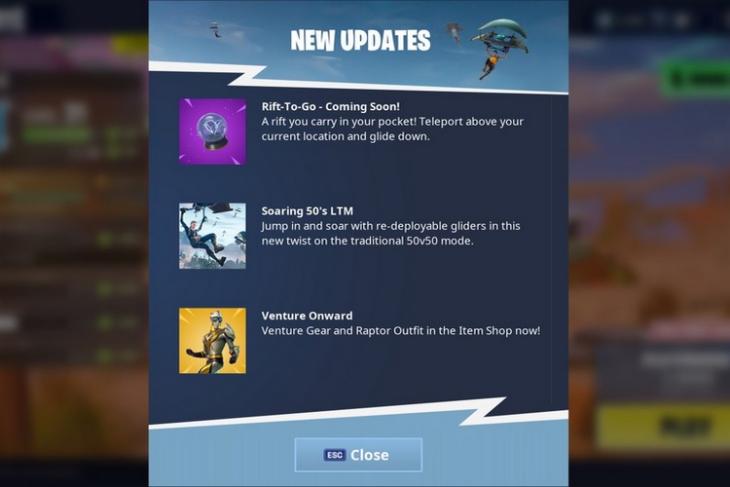 Fortnite’s rifts have been wreaking havoc since their arrival with Season 5 of the hit battle royale game, erasing structures from the game in a matter of seconds. But they are also a blessing in disguise for players who want to escape an onslaught from enemies.

Well, if you are a fan of rifts, brace yourself for a new item called ‘Rift-To-Go’ which basically puts a portable rift in players’ pocket, allowing them to teleport at will and eliminating the hassle of having to search for rift portals on the in-game map.

Coming soon to #Fortnite Battle Royale: Rift-To-Go!
"A rift you carry in your pocket! Teleport above your current location and glide down." pic.twitter.com/fNeN0ohCtp

Epic Games has begun teasing the arrival of ‘Rift-To-Go’ in advance, which means the new item is all set to debut today with an update whose patch notes (V5.30) have already been released. As of for the ‘Rift-To-Go’ item itself, the studio defines it as ‘A rift you carry in your pocket! Teleport above your current location and glide down’.

Details about the upcoming item recently started appearing in the in-game pop-up menus which alert players about upcoming features which are set to arrive with future updates. The ‘Rift-To-Go’ item looks like a snowglobe which could be used to open a rift portal and teleport the player to a different spot.

Once the item is activated, it will open a rift that will remain in the same state for 10 seconds and will also allow other players to use it. The ‘Rift-To-Go’ item can be found in chests, Vending Machines, Supply Drops and Loot Llamas. As to how the item functions, it will open a rift portal and teleport players into the sky while putting them in a skydiving mode.

It appears that ‘Rift-To-Go’ will serve a similar purpose as the Jump Pads, which allow players to escape an unfavorable situation by soaring up in the air. But the portable rift item will come with one advantage over jump pads, and that is unpredictability. When players use Jump Pads, their ascent can be read by enemies and they can be shot down while they are airborne, but in case of rifts, that movement tracking might not be possible.