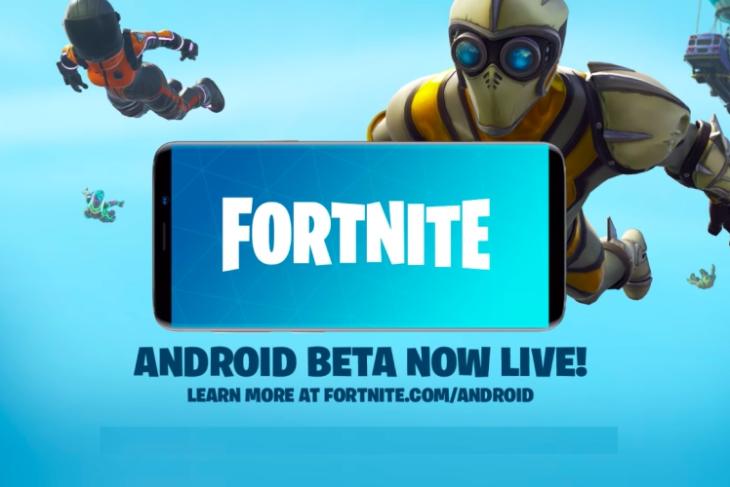 Yes, we’re talking about Fortnite yet again. This time, however, we are not talking about a rumor or speculation but the title’s official release on Android. Our wait to play Fortnite on Android has finally come to an end as Epic Games has partnered with Samsung to release the game.

Fortnite is available to test for Samsung Galaxy phone and tablet owners, but every other Android user cannot get their hands on the game right now. This is because the game will be exclusive to Galaxy devices over the weekend, i.e from August 9 to 12, via Epic’s website or the Samsung Game Launcher app.

This isn’t a surprise as Epic CEO Tim Sweeney had already confirmed that Fortnite will not be available on the Play Store to maintain a close relationship with its players and avoid a 30% cut off its in-app purchases (taken by Google).

This is surprisingly the shortest exclusivity period ever, just three days, which is way less than the 30 or 120 days leak that had been making rounds of the Internet. It seems like Epic needs a breather to see the response and increase its server capacity to welcome all the new players to the Fortnite.

The Fortnite beta for non-Samsung Galaxy devices is expected to be made available after the weekend, which is when this tiny window of exclusivity ends. You can already sign up to get access to Fortnite on Epic Game’s website, but mind you, the device compatibility is quite limited.

You will be able to run Fortnite on most high-end Android phones, with the minimum RAM and graphics requirements being 3GB or higher and Adreno 530 or higher, Mali-G71 MP20, Mali-G72 MP12 or higher respectively. You also need to be running Android 5.0 Lollipop or higher on your device to enjoy the game.

As per the game’s official FAQ page, the Android Beta initially will work on the following devices:

Additionally, there are also a bunch of other Android devices that will support the title in the coming weeks. Epic is working to fix bugs on the following devices:

This means a bunch of Android users will eventually be able to jump on the Battle Bus and show off your dance moves after taking out the enemy or drive around in shopping carts. So, are you excited for Fortnite coming to Android? Is your device supported? Let us know in the comments below.