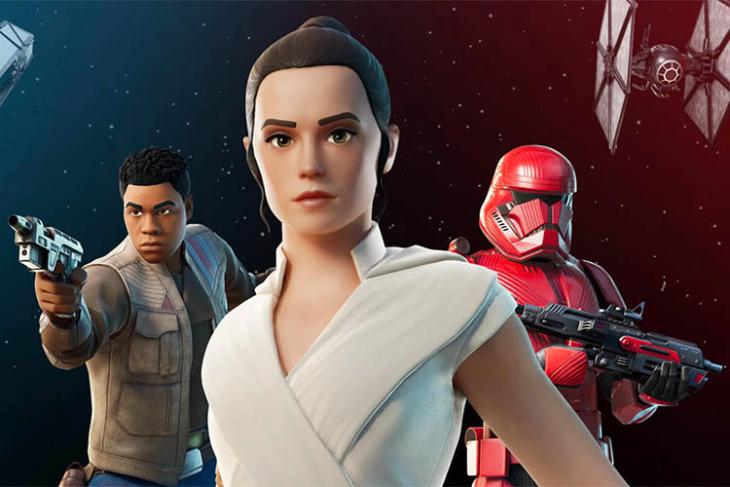 Epic’s popular battle royale game Fortnite has today added new Star Wars themed items to its Item Shop ahead of the upcoming release of Star Wars: Rise of Skywalker. Fortnite players can now head to the Item Shop to purchase skins for major Star Wars characters like Rey and Finn. There’s also a Sith Trooper skin, and even a Tie-fighter glider that players can purchase from the shop in exchange for V-bucks.

The game has added the new skins and emotes in time for the game’s upcoming special Star Wars feature where players will be able to see new and exclusive Star Wars footage at the Risky Reels theatre on the game’s island.

It’s noteworthy that this isn’t the first Star Wars related crossover event the game has seen. Last month, the game added a Stormtrooper skin to the game when EA launched Star Wars Jedi: Fallen Order. Apart from that, Epic has had major crossover events with major pop-culture movies like the Thanos skin it added when Infinity War released. The game has also added Black Widow and Star Lord skins, and allowed players to use weapons like Captain America’s shield and Thor’s hammer in the game. DC fans were also treated by the game when it added a Batman skin during an anniversary event for Batman.

Coming back to the new Star Wars skins, emotes, and glider, the skins are priced at 1500 V-bucks each, the Tie fighter glider is 1200 V-bucks, and a complete Star Wars bundle with 6-items is priced at 3500 V-bucks. If you’re like me and more interested in grabbing that ‘Traitor’ emote, that will set you back 300 V-bucks.

The in-game Star Wars event is scheduled to take place on December 14 at 2PM ET in Risky Reels, so gear up with your Star Wars skins and emotes, and drop down at Risky to see exclusive footage from the upcoming Star Wars movie.