Skip to content
Home News ‘Star Wars: The Rise of Skywalker’ Coming Soon to a Fortnite App Near You 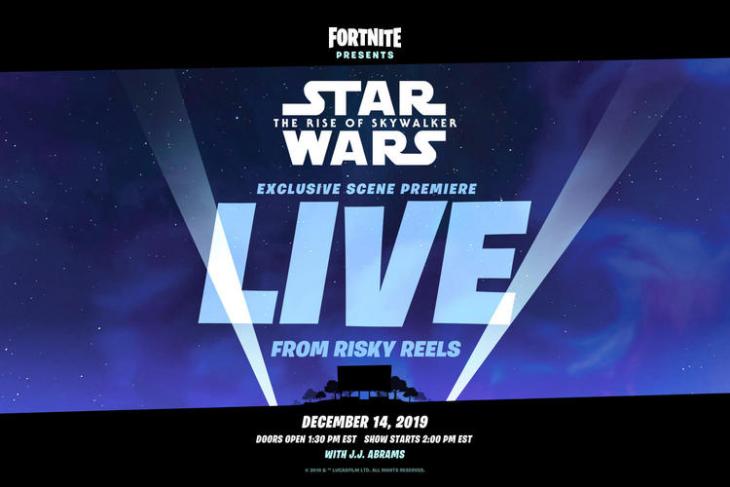 Something from a galaxy far, far away will visit Fortnite this weekend. With the next installment in the Star Wars franchise all set to hit theaters December 20th, Walt Disney Studios and Epic Games have tied-up to debut an exclusive glimpse of the movie within Fortnite’s ‘Risky Reels’ section on Saturday, December 14.

In an official blog post over the weekend, Epic Games announced that J.J. Abrams, the director of Star Wars: The Rise of Skywalker, will reveal “never-before-seen footage” from the movie on Saturday, December 14 at 2PM ET (12:30AM, December 15, India time). The virtual doors to the theater will open half an hour before that, said the company.

You won’t want to miss this 👀 pic.twitter.com/xRD0ynjaJT

The latest collaboration between Epic and Disney comes a few weeks after a new Star Wars stormtrooper cosmetic skin was launched for Fortnite. The DLC was free for those who bought Jedi: Fallen Order on the Epic Games store, but came with a price-tag of 1,500 V-Bucks if purchased separately. The game has also seen cross-promotions for a bunch of other movies and games, including Avengers, John Wick, Batman and more.

While Fortnite has been a promotional vehicle for other brands in the past as well, this is the first time we’ll see the screening of actual movie scenes within the game itself. It will be interesting to see if more such cross-promotions between Epic and other movie studios are in the offing going forward, but going by the buzz this one seems to be generating, it will be a surprise if that doesn’t happen in some way, shape or form.