Flipkart, the Indian e-commerce giant that competes against the likes of Amazon India has kicked off their annual Big Billion Days sale. This is pretty much the biggest sale that Flipkart has to offer in a calendar year. The Big Billion Days sale was introduced in 2014 and after its huge success, the company decided to conduct it on an annual basis. This year, the sale will come to a close on September 24th, five days after it took off on September 20th. So, if you’re in the market looking for some amazing tech deals, this is the best opportunity you can get to purchase gadgets at a fraction of the actual price. Well, without further ado, let’s take a look at the 17 biggest tech deals on the Flipkart Big Billion Days sale:

Apple’s flagship smartphone of 2016 is still quite capable than almost all other Android smartphones out there, thanks to the Apple A10 Fusion chip. The 4.7-inch wide color gamut IPS display is a treat to look at, despite the lower 750p resolution. The primary 12 MP camera does a stellar job when it comes to taking stills and the secondary 7 MP camera lets you take some impressive selfies with your friends. Thanks to the Big Billion Days sale, you don’t have to sell your kidney to purchase one anymore.

Apple’s truly wireless earbuds for the iPhones managed to impress us with the set of features it had to offer. It’s powered by the custom-designed W1 chip to make the earbuds as smart as possible. Users will be able to fully control AirPods with the help of the integrate Siri voice assistant and they can also expand its battery life to over 24 hours by carrying the tiny charging case that comes along with the earbuds.

This is certainly one of the best budget gaming laptops you can buy as it’s powered by a 7th generation Intel Core i7 processor, NVIDIA GeForce GTX 1050 Ti graphics card and 8 GB of RAM. This laptop should be able to run almost every game at medium to high settings while maintaining a stable 60 fps frame rate.

The Lenovo K8 Plus is one of the latest mid-range smartphones that the Chinese smartphone manufacturer has to offer. It packs some impressive hardware like 5.2-inch Full HD display, dual 13 MP + 5 MP camera setup on the back and an 8 MP snapper on the front. The device is powered by the MediaTek Helio P25 octa-core chip coupled with 3 GB of RAM and packs a 4000 mAh battery to make sure it doesn’t run out of juice even after heavy usage throughout the day.

Interested in purchasing an external HDD for all your portable storage needs? Well, as a part of the Big Billion Days sale, ADATA’s 1 TB External hard disk is currently available on Flipkart for just under Rs. 3000, which is a 57% discount on the actual MRP which is nearly Rs. 7000. It’s currently selling like hot cakes, so make sure you add it to your cart before it runs out of stock.

If you’re looking for a mid-range laptop for an affordable price, this is probably the best one you can get right now. The Lenovo IdeaPad 320E is powered by a 7th generation Intel Core i5 processor, 8 GB of RAM and an NVIDIA GeForce 940MX graphics card that’s capable of running all games at low to medium settings with a decent frame rate. However, it comes with DOS, so you need to purchase Windows OS separately.

There’s no doubt regarding the fact that LG makes one of the best OLED displays when it comes to TVs. It has an extremely slim and sleek design to make it more appealing to the users and even has minimum bezels for the best viewing experience. Support for HDR with Dolby Vision is a welcome addition for attaining the pinnacle of picture quality. In addition to all this, it has smart TV features which let you watch movies and TV shows online, right from the comfort of your couch.

Looking forward to purchase your first DSLR camera? Well, the Canon EOS 1300D is a beginner-level DSLR that should be able to meet almost all your demands. It has an 18 MP APS-C CMOS sensor and it’s powered by Canon’s DIGIC 4+ processor. The camera has Wi-Fi and NFC support, to make sure you can wirelessly transfer all your photos to other devices. That being said, a Canon EF-S 18-55mm IS II kit lens, a 16 GB SD card and a camera bag comes bundled along with this camera and it’s definitely worth every penny that you’re paying for, especially after the discount.

For its current asking price, this is probably the best MicroSDHC card you can probably get when it comes to price-to-performance ratio. It has a storage space of 32 GB and a maximum transfer rate of 95 MB/s which is seriously impressive at this price point. The memory card is covered by 10 years warranty, so you can get the faulty units replaced with ease.

This is an upcoming football simulation video game that’s all scheduled be released on September 29th, but the game as already received a slight price cut as part of the Big Billion Days sale. Players can compete against their friends and other players from across the world, thanks to online multiplayer modes. Ultimate Team is a compelling edition to the game, which lets players build their own team from the ground-up. There’s also a single-player career mode called “The Journey”, which is pretty much a continuation of the events post FIFA 17.

If you travel quite a lot, the battery life of your smartphone might just not make the cut, and that’s exactly why you get a power bank. Keep your portable devices charged, regardless of whether there’s a power outage in your area and make sure they don’t run out of juice. The power bank has a huge 11,000 mAh battery that should be good enough to charge an average smartphone for about 3 to 4 times.

Google’s Chromecast is a plug and play dongle that lets you cast your favorite videos, music, photos and other forms of entertainment straight from your smartphone to the TV. It makes use of the TV’s HDMI port to establish the connection. The second generation of Chromecast is considered as an incremental upgrade over its predecessor. In addition to entertainment, there are various applications on the Google Play Store that can take advantage of this smart device.

This is the bigger brother to the Apple iPhone 7, and although they both share similar specifications, the iPhone 7 Plus has a couple of extra hardware changes that sets it apart from its younger sibling. First one is the dual-camera setup on the back that lets you take some stunning portraits with shallow depth of field. Second one is the Full HD 1080p resolution that provides more pixels per inch for its 5.5-inch display. Sure, this is definitely the better iPhone 7 variant, but it comes at a higher cost.

Redmi Note 4 is the best-selling budget smartphone in India for obvious reasons, of course. When it comes to the hardware it packs, the device is actually a steal. It’s powered by the octa-core Snapdragon 625 chip coupled with 4 GB of RAM and has a 13 MP primary camera to take some great stills. The smartphone has a 4100 mAh battery to make sure the device doesn’t run out of juice in a day even under heavy usage. With the Big Billion Days discount, the smartphone is definitely a much more tempting deal.

This iPad was released earlier this back in March, and although it packs ageing hardware, the tablet is still quite capable in terms of performance. It’s powered by the Apple A9 chip coupled with 2 GB of RAM, that’s still good enough to handle the new iOS 11 without breaking a sweat. The gorgeous 9.7-inch retina display is a treat to look at, letting you see even the slightest details. The new iPad has an 8 MP primary camera and a 1.2 MP selfie camera, just in case you want to take photos on a tablet and look weird in public.

Do you feel like you need Wi-Fi wherever you go? Well, you can take advantage of JioFi M2S, a wireless data card that can provide Wi-Fi regardless of where you are, as long as you have a Reliance Jio 4G SIM card installed in it. It’s capable of providing download speeds of up to 150 Mbps and upload speeds of up to 50 Mbps. Lastly, it has a 2300 mAh battery that’s capable of providing a surf time of up to 6 hours.

Interested in purchasing a MacBook and experience macOS without having to shell out a chunk of cash? Well, the MacBook Air is certainly the most affordable laptop from Apple that you can get your hands on. It’s powered by an Intel Core i5 processor, 8 GB RAM and a 128 GB SSD for storage. Sure, the hardware isn’t impressive for today’s standards but it’s still capable of handling macOS flawlessly.

Although these are some of the biggest mouth-watering deals that Flipkart has to offer as part of their Big Billion Days sale, the e-commerce giant has a plethora of other deals listed on their website that customers can take advantage of. It’s worth noting that the prices mentioned in these deals might vary at any time, because the deals are temporary in most cases. Therefore, you need to make sure that you’re quick enough to purchase before the products go out of stock and the deal ends. Also, we will be updating this article as Flipkart reveals more deals, so stay tuned. So, which one of these hot deals are you going to take advantage of? Do let us know, in the comments section down below.

Back in 2019, Israeli hackers spied on Indian journalists and activists using state-of-the-art spyware called Pegasus. Made by a private company based in Israel,...
Beebom Staff - Jul 21, 2021 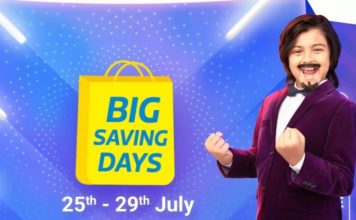 Ahead of Amazon's annual Prime Day sale, which is set to kick off July 26, Flipkart has announced its Big Saving Days sale that...
Beebom Staff - Jul 19, 2021

In a move to establish its own hold on the handheld gaming device market, Valve has surprised gamers with the launch of the Steam...
Beebom Staff - Jul 17, 2021