With AirPlay, streaming content from iPhone to AirPlay TV or speaker is as seamless as it can ever get. Once you have set up your iDevice with the supported TV or smart speaker, you can stream video/audio with ease and also control each aspect of the play with the desired convenience. But that is not to suggest that AirPlay hasn’t had its fair share of issues. To prevent the common pain points from destroying your playtime, I have talked about the 10 best tips to fix AirPlay not working issues on iPhone, iPad, Mac, HomePod, and Apple TV.

When it comes to troubleshooting AirPlay issues, you need to take a number of things into account. For instance, you have to keep in mind the system requirements (right off the bat), sluggish Wi-Fi network, and even ensure that the settings are ideally customized.

Not just that, you will also have to be fully prepared to deal with the random bugs that seem to have become the part and parcel of iDevices these days. Now that you have got a sneak peek into the things you have to deal with, let’s cut the chase!

If you want to take advantage of AirPlay 2 to enjoy multi-room audio and the exciting stereo pairing on the HomePod, be sure your devices meet the requirements.

AirPlay Allows You to Stream to the Following Devices

Another essential thing you should do is to ensure that your devices are connected to the same Wi-Fi network. As it’s a must, be sure to always tick it off.

On iPhone, iPad, or iPod touch: Navigate to the Settings app -> Wi-Fi. Now ensure that your device is connected to the same Wi-Fi network as the AirPlay device. Besides, also make sure that Bluetooth is enabled on your iOS device.

On Mac: Click on the Wi-Fi icon in the menu bar to check whether or not your Mac is connected to the same network.

On Apple TV: Go to the Settings app on your Apple TV and choose Network. Now, make sure your Apple TV is connected to the right network. If you are using an Ethernet cable with your Apple TV, be sure that the cable is plugged into the router that you use for Wi-Fi.

Third-party AirPlay-compatible speakers and Smart TVs: Take the help of the user manual to learn how to connect them to your Wi-Fi network.

HomePod: For seamless connectivity, HomePod uses the same Wi-Fi network as the iOS device which you used to set up the smart speaker.

Just in case the OS device is in range of HomePod and connected to a different Wi-Fi network, an alert will appear in the Home app stating the “Wi-Fi Network.”

To connect your HomePod to the same Wi-Fi network as your iOS device, launch the Home app. Then, touch and hold the HomePod icon and choose Settings. Next, tap on “Move HomePond to “Wi-Fi network”.

Ensure That You Haven’t Restricted Your Apple TV

For a fully personalized experience, tvOS lets you control who can AirPlay on your Apple TV. So, make sure the restriction is not coming in the way of screen mirroring.

Head over to the Settings app on your Apple TV -> AirPlay -> HomeKit. Now, you should see four options:

Now, if you want to go for unrestricted play, choose the first option (Everyone).

Allow iPhone to Discover and Connect to Nearby AirPlay TV Automatically

For a seamless experience, iOS automatically discovers and connects to nearby AirPlay TVs you use frequently when playing content from your favorite apps. If you don’t want to go for this automatic option, you can make iOS ask you before connecting to a nearby AirPlay TV.

Besides, there is also an option to completely stop iPhone from connecting to an AirPlay TV. You (or one of your family members) might have mistakenly selected Never and forgot to deselect it. So, be sure you have allowed iPhone to discover the supported TV and connect to it. 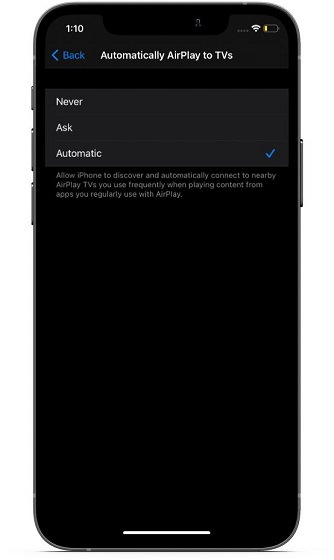 Native to Settings app on your iOS device -> General -> AirPlay & Handoff -> Automatically AirPlay to TVs. Now, choose either the Ask or Automatic option.

If you are still unable to stream content to your AirPlay devices, restart all of them. Many a time, a simple reboot tends to do wonders, especially when dealing with common issues like this. So, do give it a chance as well. 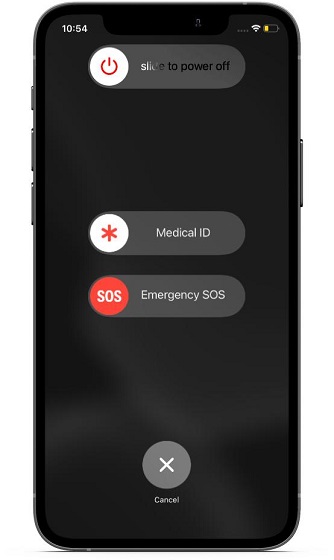 Restart Your Mac: Click on the Apple menu at the top left corner of the screen and choose Restart.

Restart Your HomePod: Launch the Home app on your iPhone, iPad, iPod touch, and then long-press the HomePod icon. Next, scroll down and tap on Reset HomePod. After that, select Restart HomePod.

Restart Your Apple TV: Hold down the Menu button and Home Home button on the Siri Remote until the Apple TV status light starts blinking.

Note: To restart your smart TV, take the help of the user manual.

Update Software on Your Devices

If none of the above solutions has worked in fixing AirPlay issues on your iOS device, Mac or Apple TV, I guess the problem could be due to outdated software or a bug. The good thing is you can resolve this by simply updating your iDevice to the latest software version.

As Apple keeps rolling out the latest software updates with a wide range of performance improvements and bug fixes, there is a high chance that updating software may sort out the issues. 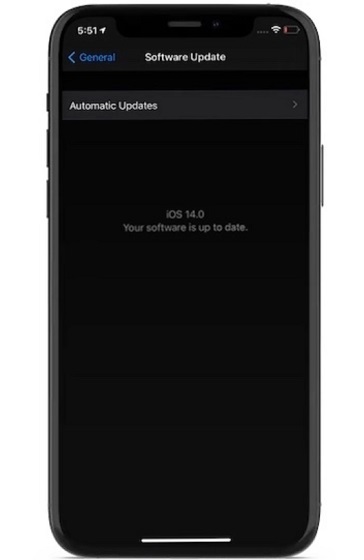 To update your Mac: Click on the Apple menu at the top left corner of the screen and choose System Preferences. Now, click on Software Update. Then, download and install the latest version of macOS. 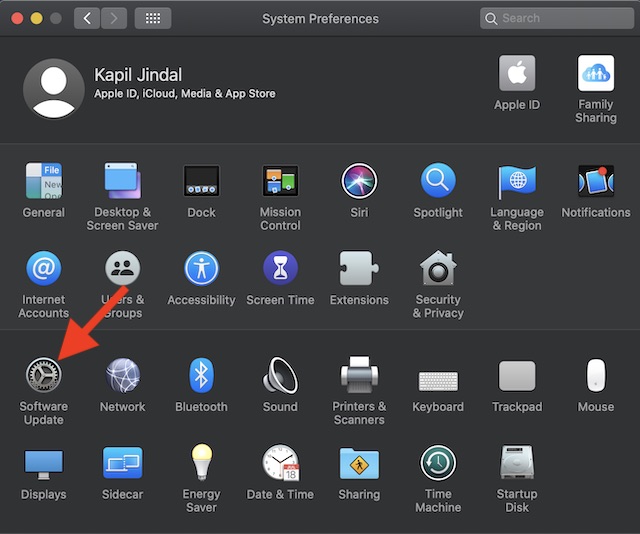 To update HomePod: By default, HomePod and HomePod mini automatically install software updates. Besides, you can also check for updates in the Home app on your iPhone, iPad, iPod touch, or Mac and then update to the latest version of the software. Open the Home app on your device -> Home Settings -> Sofware Update. Now, click/tap on Install to download and install the latest software version.

To update Apple TV: Navigate to the Settings app on your Apple TV -> System -> Software Updates. Now, select Update Sofware. If there is any update available, download and install it.

Note: To update your smart TV, you can take the help of the user manual or go to the company’s website to learn the process.

If You Can See Video But Can’t Hear Audio, Try This Quick Fix

Just in case you can see video but can’t hear audio when streaming video from your Mac or iOS device to your Apple TV, ensure that the volume is not muted on both devices.

When streaming video from your iOS device, make sure the silent switch is disabled. If the mute switch is enabled, you will see an orange line. Simply toggle the switch and then try using AirPlay to check if the problem is gone.

Does Your Music Automatically Stop? Here is the Fix

If the music app stops playing automatically, the Home app might be using your HomePod, Apple TV, or AirPlay-supported speaker as the main audio source for streaming content – even if you aren’t currently playing music on HomePod or Apple TV. In this case, if you try to use Siri or perform any task, the playback will immediately stop. You can instead choose to use your iOS device or computer with iTunes as an audio source to stream music manually.

If Your Network is Too Slow, Try These Fixes

If your Wi-Fi is rather slow or you are facing interference from a nearby device like a baby monitor and microwave, try out the following fixes: 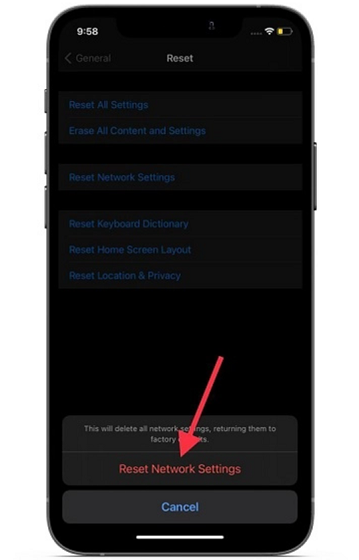 That’s it! Hopefully, AirPlay has returned to its best on your devices and you have started to enjoy streaming video/audio content in all its glory. But before you go on for a long streaming spree, do not forget to let me know the trick that has enabled you to fix AirPlay issues on your iPhone, iPad, Mac, or Apple TV.

Besides, if you have got any handy tips related to this issue to share, be sure to shoot it via the comments section below. I might think of mentioning them in this guide.