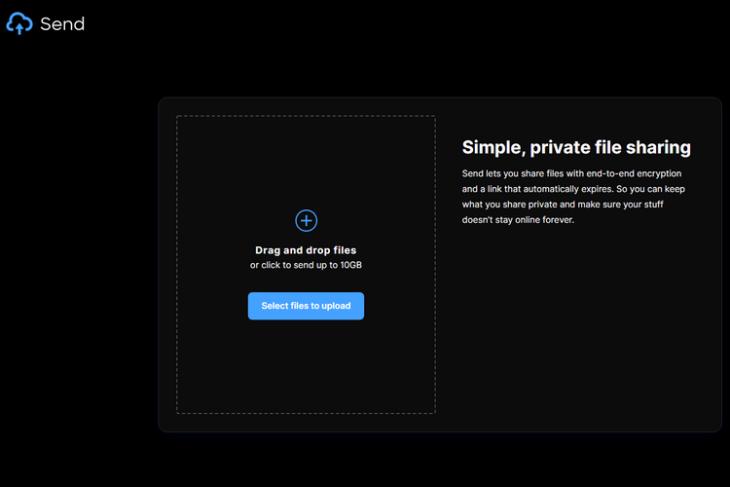 Mozilla had a free file sharing service called Firefox Send that helped users send self-destructing files over the internet. The company had to suspend the service in July last year as some users abused the service to spread malware. A few months later, Mozilla announced it is shutting down Firefox Send. If you are missing the convenience Firefox Send offers, you’ll be glad to know that there exists Send, a community-supported fork that keeps the project alive.

Netherlands-based developer Tim Visée is the maintainer of Send, a community-focused fork of Firefox Send. The open-source project aims to keep the project up-to-date and alive. Notable changes in the project ever since Mozilla discontinued Firefox Send include removal of Firefox branding for legally self-hosting, updated dependencies, removal of reporting, download tokens, and trust warnings. You can go through the project’s source code on GitHub.

Coming to instances, Send’s maintainer has hosted an instance of the website on Digital Ocean. You can use it to upload up to 10GB of data and it lasts for 7 days. Using the website is just the same as how you would use Firefox Send. If you’re hearing about Firefox Send for the first time, go through our old guide on using Firefox Send to learn more.

Similarly, other contributors have linked their self-hosted instances with varying data upload capacity and expiry limits on GitHub. You can view available public instances from here, but be warned that neither the maintainer nor us can ensure the reliability and security of third-party instances. You can also choose to host your own instance by following the steps in the project’s documentation.

If you liked the project and are interested to use it on a regular basis, consider donating to the maintainer to help pay the bills to keep the public instance alive. In case you’re looking for an alternative, I would recommend Wormhole, which is a project from the creator of WebTorrent. It offers 5GB of space for 24 hours or up to 10GB of P2P transfer. Except for the overwhelming UI animations, Wormhole is a viable alternative to share files with end-to-end encryption.