How many times have you received a call from some unknown number, only to find out that it’s not that person you gave your number to, but a promotional call, or spam? Some people don’t even bother answering calls from unknown numbers for this very reason. That is exactly where DU Caller (Free) comes into play. DU Caller is, at it’s core, a caller ID app. Available on Android, the app makes sure that you always know who’s calling you, and also whether or not you should answer. We decided to give DU Caller a try, and share our two cents with you.

While some might argue that the interface is secondary to the function (and I kind of agree), it still is a very important part of the app. And that is where DU Caller nails it. The interface is clean, and intuitive. The choice of colors is great, white and blue. It follows Google’s Material Design principles, and follows them perfectly, might I add. 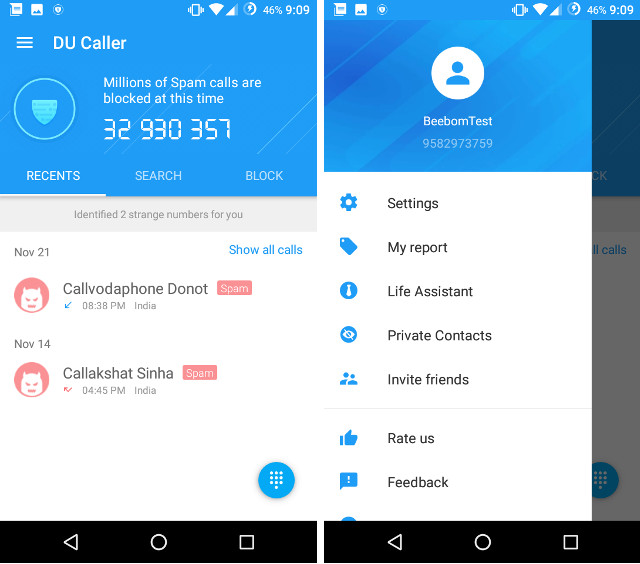 The hamburger menu slides right in with a quick swipe from the left, and displays all of the features that are available in the app. You get “Settings” on the top, followed by a number of other features, that I’ll go into detail later. One thing that I do want to point out, is that I’m extremely happy, that the app offers an option for “Feedback”, as well. Not many apps do that, and it’s good to see an app that does. If there is one thing that I wish they changed, it’s the counter on the top of the home page, which can be a bit distracting. Apart from that, this app is great, as far as UI is concerned.

DU Caller offers a number of features; it’s not just a caller ID app. I mean, they clearly state that it’s a recorder, as well, among many other things. However, if you read the description of the app, the recording feature is only available on “several Samsung devices“. Unfortunately, we don’t have a Samsung device, here, so I could not test that particular feature out. I’m just gonna assume that it works, though, because the rest of the app works really well.

Starting off with the Caller ID function, the app was correctly able to identify a number of spam calls from the call history, and was able to correctly recognize my phone number, which (I checked) was not saved in the contacts of the test device. You can always tap on the “shield” to scan your call history for unknown numbers, that DU Caller can try and identify for you. 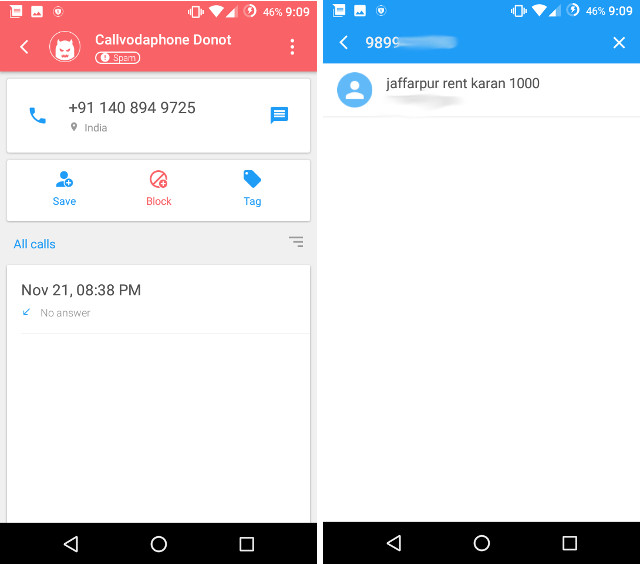 Swiping from the right, gets us to the Search page, where we can search for numbers that we want to find the names to. Now, they say they have a big database, and they probably do, at least for spam callers. I found that while DU Caller was good at identifying spam calls, it didn’t recognize most of the phone numbers that I searched for. Phone numbers of real, actual people, that I know. That said, it did recognize some of them.

Another swipe from the right, and we’re at the screen where we can see everyone we’ve blocked, and we can even add new numbers to the list. 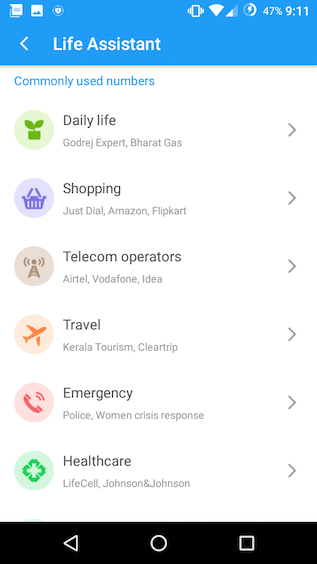 You will also get the contact numbers for travel agencies, emergency helplines, healthcare, financial services, and a lot more. Basically, the Life Assistant is there to make sure that if you ever need a phone number to any service around you, you can easily get it.

One of the really cool features offered by DU Caller, is Private Contacts. This is exactly what it sounds like, a list of contacts that you don’t want anyone to know you’ve been talking to. DU Caller ensures that the numbers you add into Private Contacts don’t show up in the call history, anywhere in the phone. 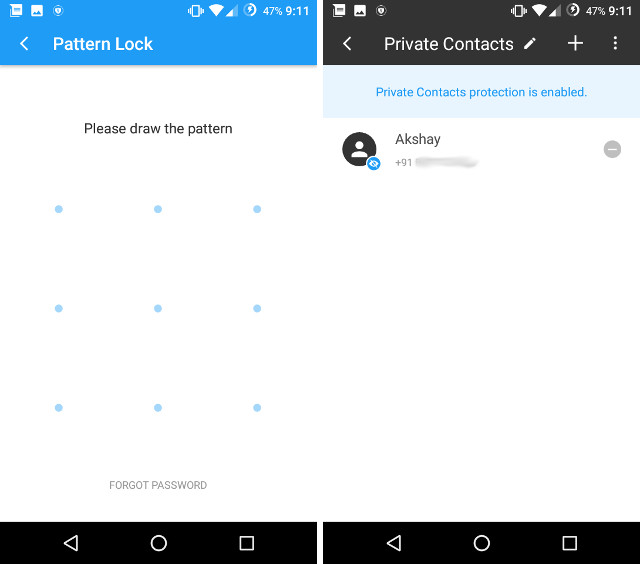 The only way to view the call history for these numbers is by using the DU Caller app, unlocking the Private Contacts with a pattern lock, and then you can see the call history for those contacts. The reason my number wasn’t visible in the screenshot where I showed you all the recognized numbers, is because I tested my number with the Private Contacts.

The Settings page for the app is very simple. There are two sub-headings, namely “Block”, and “Pop up dialog”. Both of these allow you to change how the app behaves on the phone. Under the “Block” sub-heading, you can make the app automatically block common spammers, international numbers, and much more. 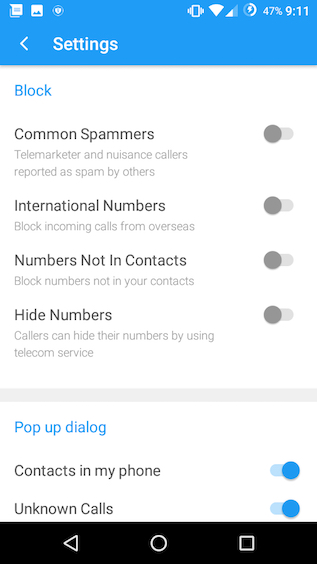 In the pop-up dialog, you can set up when you want the DU Caller pop-up to be displayed. By default, the pop-up is displayed for every call that comes in to your phone. The good thing about this, is that the pop-up is not obtrusive, and wouldn’t really get in your way, so it may be a good idea to keep it to default.

DU Caller is a good app. One which you can use to identify spam calls, and even to block them directly, without having to go through the trouble of doing anything. You can simply toggle the setting for “Block Common Spammers”, and the most common numbers that are reported as spam, will automatically be blocked from your device. The private contacts option is also good, especially if you correspond with people that you’d rather others didn’t find out about. Definitely give DU Caller a try, and do let us know what you thought about the app, in the comments section below.