Skip to content
Home News CES 2020: This Display Will Let You View and Interact with 3D Content Without a Headset 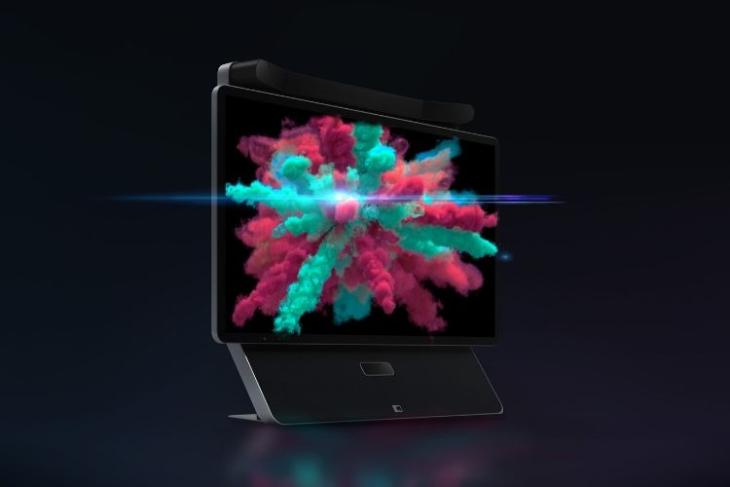 The biggest consumer electronics trade show, CES 2020, kicks-off next week but we are already seeing announcements pour in ahead of the show floor opening dates. Have you ever heard of simulated reality? Well, Dimenco has unveiled the world’s first interactive 8K 3D display ahead of CES 2020 and let me explain what exactly it is capable of.

The display you see below is part of the company’s Simulated Reality Development kit. It boasts a 32-inch screen size and 8K resolution, which is combined with a sensor array to create a 3D parallax experience. The devkit supports 4K resolution per eye, allowing you to look around and see your designs in a 3D space. You can even film the 3D models via your smartphone, as seen below.

Dimenco has partnered with Ultraleap to certify their Leapmotion sensors, which enable hand tracking in a simulated reality. This means you can now touch and feel 3D designs without putting on a headset. The company has also added mid-air haptic feedback for making your 3D designs feel more realistic in the simulated space.

In an official press statement, Steve Cliffe, CEO at Ultraleap talked about the partnership and said, “Adding the sense of touch to digital content makes it come to life. Experiences are much more immersive and engaging.” Dimenco will showcase newly developed Unity Editor and SR Model Viewer software at the Microsoft Experience Center and MSI private suite during CES next week.

MSI is one of the launch partners for Dimenco and will show off the first-ever “Simulated Reality” laptop, which lets you interact with fully immersive 3D objects in a virtual space without wearables. We should expect consumer devices that incorporate SR visualization capability to arrive in the market in early 2021.