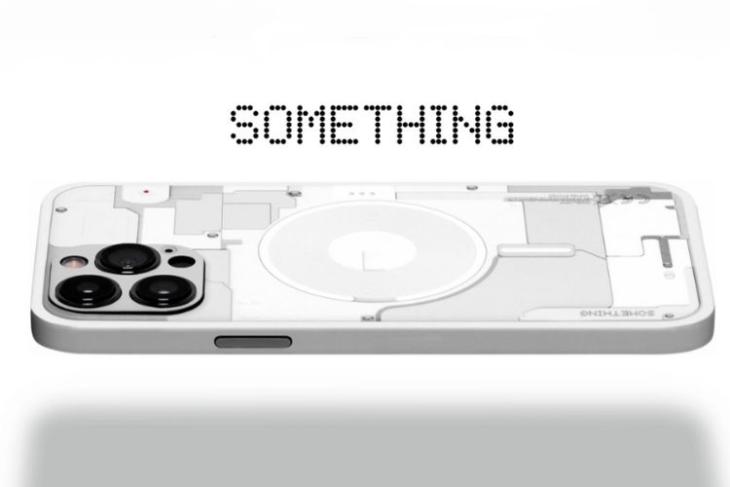 The Nothing phone (1) launched a few days ago and even if it has already started encountering problems, it is safely one of the most hyped up and intriguing products. Milking on the same hype, Dbrand has now come up with phone (1)-inspired skins called Something to give other phones the Nothing phone (1) feels.

Dbrand Has “Something” for You!

The new Something skins by Dbrand offer the same aesthetic look of the phone (1) on your Apple, Samsung, or Google smartphone. So, if you really like the semi-transparent design and want a similar treatment without buying Nothing’s phone, this can be your option.

Dbrand has introduced both skins and cases that show the internals of the device, which is the premise of the Nothing products, at least for now! It also has the Something branding in the bottom right corner in Nothing’s dot font. Of course, it won’t enable the Glyph Interface but at least the basics are met.

But, the skins aren’t available for a wide variety of products. The Something skins are for the iPhone 13 Pro Max, the Galaxy S22 Ultra, and the Pixel 6 Pro. If you own any of these phones and want to add a twist to their looks, might as well add the phone (1)-inspired skin, which Dbrand claims is not theft.

One interesting part is that the semi-transparent design on the skins and cases tries to resemble the internals of the iPhone 13 Pro Max, the Pixel 6 Pro, and the Galaxy S22 Ultra. The S22 Ultra skin also showcases the S Pen placed inside the built-in slot, which appears pretty cool. Here’s a look.

More smartphone brands could be added soon and if you want Dbrand to come up with one for your smartphone, you can mail them and might get a positive response.