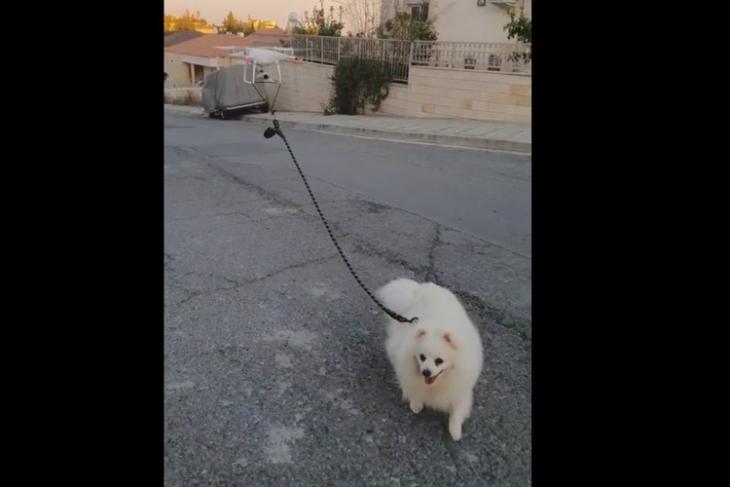 With the emergence of drones in the world, they have been used for several purposes. We have seen the use of drones to plant trees in Project Flash Forest and then we saw Japan using drones to monitor underground metro tunnels. However, a man in Cyprus has found the most futuristic use for drones! He is using a drone to walk his Spitz amidst the mandatory lockdown due to the Novel Coronavirus.

The island country of Cyprus has seen the effect of COVID-19 with 75 confirmed cases across the country. President Nicos Anastasiades has enforced a lockdown in the country just like any other affected country. As per the new lockdown measures, all the malls, schools and public spaces in the country will remain closed and people are restrained in their houses.

Now, as recent reports suggest that pet dogs and other animals cannot get infected by the Coronavirus, they are free to roam the streets without any worries. However, the question remains, who’d take these furballs outside for a walk? Cause their human owners are quarantined!

However, a man named Vakis Demetriou of Limassol shared a video on Facebook showing how he is walking his pet dog in the streets using a drone. Captioned “5th day quarantine”, the man encouraged people to stay at home during these bizarre times but also reminded them to think about their pets’ happiness. The video garnered over 1 million views on the platform.

The tail-wagging furry doggo seemed quite happy to roam the empty streets of the city and did not even care who or what (in this case) is holding the other end of the lease. At the end of the video, the Demetriou is seen standing in the balcony with the drone controller in hand.

The video, originally published on Facebook, was shared across various social media including Twitter, where it gained over 4 million views. Many users compared it with a scene from the famous movie “Back to the Future” that released way back in 1985. However, I think this is a classic example of the popular meme quote – “Modern problems require modern solutions”.