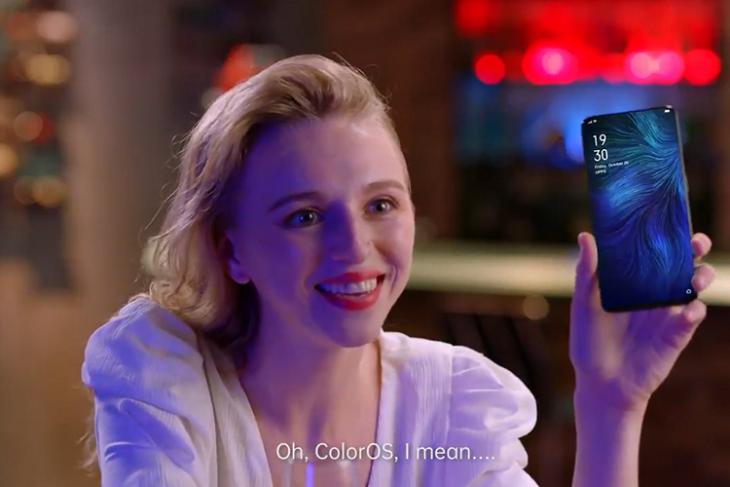 Oppo reportedly uploaded a couple of video ads for promoting its ColorOS 6 earlier this week. The Chinese smartphone giant then took the videos down after facing criticism for how lame the ads were. The folks at Android Police, however, managed to save the videos before they got deleted from Oppo’s Twitter account.

In the first video, a lady can be seen describing and fantasizing about ColorOS as if it were a human being to a gentleman. The ad’s location is set in a restaurant and she starts talking hopelessly romantic lines about ColorOS, “I always loved him, you know?” for instance. She even goes to the extent saying that “he” protected her from being harassed. The man now acts suspicious and asks “Who are you talking about?” for which she gives an awkward smile and explains the situation after picking up her phone running ColorOS 6 from the table.

Even after this description, if you’re still brave enough to watch the video, take a look at it below. However, let me warn you that you can’t unsee what you’re about to witness.

The cringefest doesn’t end here. In the second ad, Oppo casts the same pair of actors, but now, they’re in an office. By the looks of it, the lady takes the role of a boss or a person in a superior job role. She enquires the man about his new secretary for which he states that she (spoiler alert- ColorOS) always reads his mind and says “she accompanied me throughout the day till bedtime”.

I honestly did not see this one coming from OPPO, a company that takes ad campaigns very seriously. If you live in India, you know what I’m talking about. The streets are flooded with Oppo’s banners and ads. If they had invested a bit of time and thought process while making the ad, it would not have ended up in the trash.

So, what are your thoughts on these ColorOS ads? Let us know in the comments.

Here’s How You Can Remove Ads From ColorOS 6

10 Best ColorOS 6 Features You Should Know