Oppo has released the latest version of its Android skin and it’s turning out to be a very good update. With the ColorOS 6.0 update which is based on Android Pie, Oppo is seeming to withdraw from its “just another imitation of iOS image” and moving closer towards stock Android. The new update not only focuses on making the skin lighter and better looking but also enhances the overall performance. In this article, we are going to take a look at the new ColorOS 6.0 update and see everything that’s new in it. We will also cover some tips and tricks that will help you get the most of this new update.

The biggest change coming with the new ColorOS 6 update is the inclusion of an app drawer. Stock Android is known for its app drawer and its one of the biggest UI feature that differentiates it from iOS. Most of the Chinese smartphone makers including Oppo, Huawei, Xiaomi, and more have not included any app drawer on their Android skin which made them a cheap imitation of iOS. With the ColorOS 6.0 update, Oppo is changing that by including an app drawer. 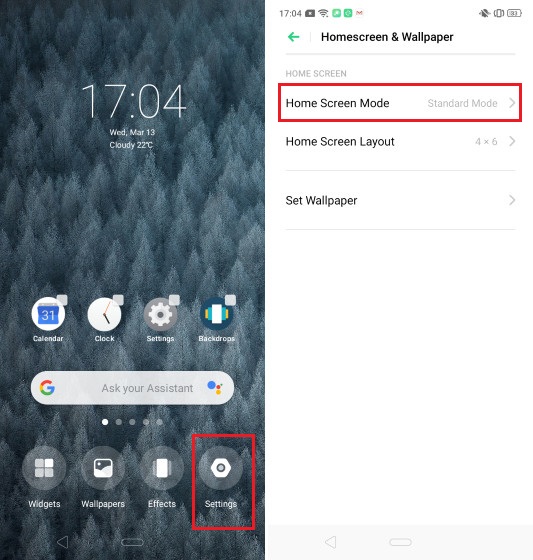 The app drawer is not enabled by default so users will have to enable it manually. To enable the app drawer, just pinch in on the home screen with two fingers and then select Settings. Here, tap on “Home Screen Mode” and then tap on “Drawer Mode” to select it. 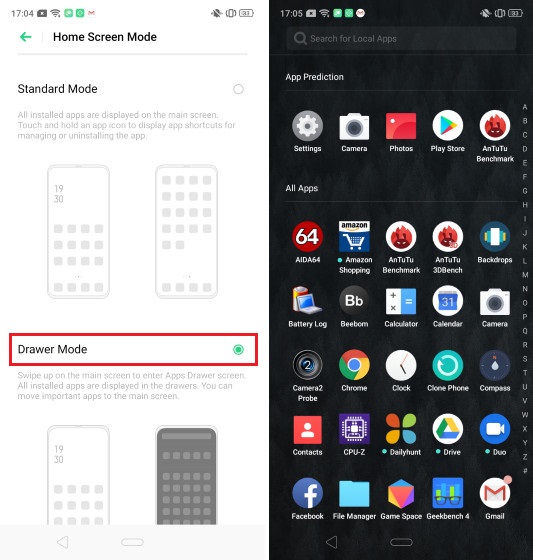 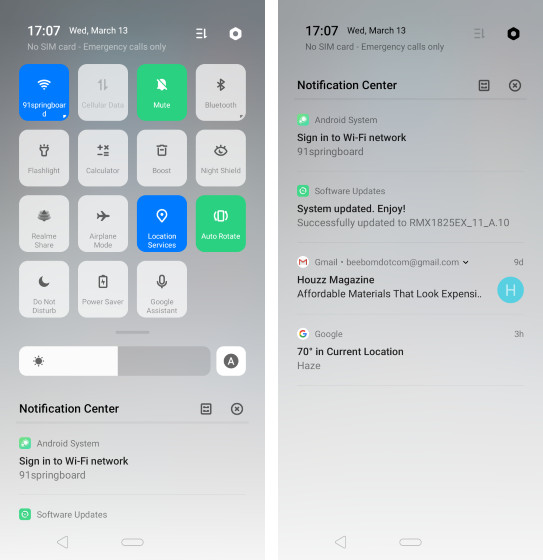 ColorOS 6 is banking a log on the new AI integration which is not only going to help you by providing visual information but also work in the background to make the skin more fluid and snappy. The most obvious place you can see the AI working is the in the app drawer where the topmost row will show you app predictions based on usage data. The features like Hyper Boost and Game Space (mentioned below) also rely heavily on the AI to detect and predict your usage to divert resources to the right task so that your phone will feel snappier. The camera app also uses AI to give you better photos. Basically, AI in ColorOS 6 will always be in the background making sure that you have a fast and fluid experience.

Another new change that brings ColorOS 6 closer to the stock Android is the redesign of the stock apps. All the stock apps that come pre-installed on the phone including the Dialler, Messages, Photo, and more have been built from the ground up and now clearly reflect Google’s Material Design theme. I especially love the new Photo app which is now much closer to Google Photos and makes it easy to find the pictures that I am looking for. 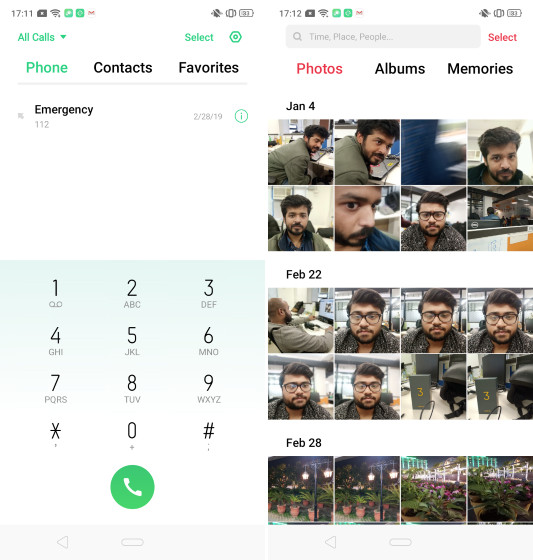 It’s a pretty small change but it shows Oppo’s commitment to using the Android user interface design over the iOS design language. With ColorOS 6, Oppo is bringing a new volume HUD which is similar to the volume HUD which Google introduced with its Android Pie update. It stays out of your way while showing you the status of your volume. By default, it changes the ringer volume when no media is playing. However, you can tap on the three-dots menu to adjust ringer, media, and alarm volumes individually. 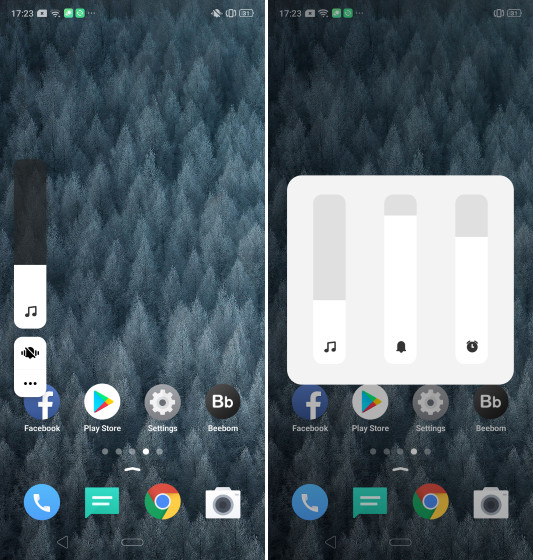 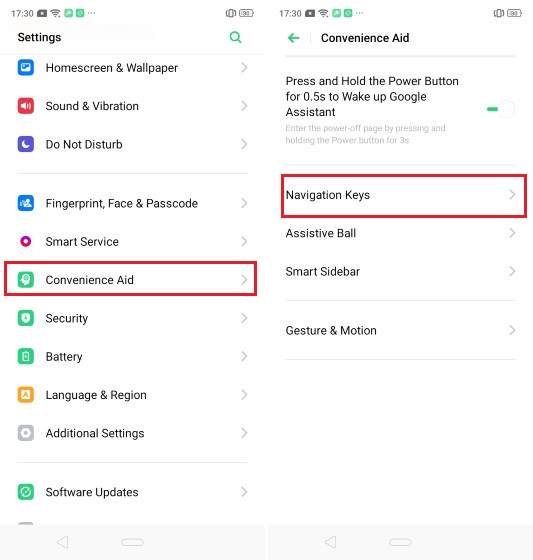 Similarly, the back button is at the left of the pill while swiping right on the pill will let you scroll between your recent apps. The good thing here is that ColorOS 6.0 gives you a ton of control over your navigation preferences. Just open the “Settings” app and go to Convenience Aid -> Navigation Keys and you can change the navigation system of the phone. You can use the old Android navigation buttons, keep the back button at the right or hide the virtual buttons all together to enjoy an iOS-like navigation system. 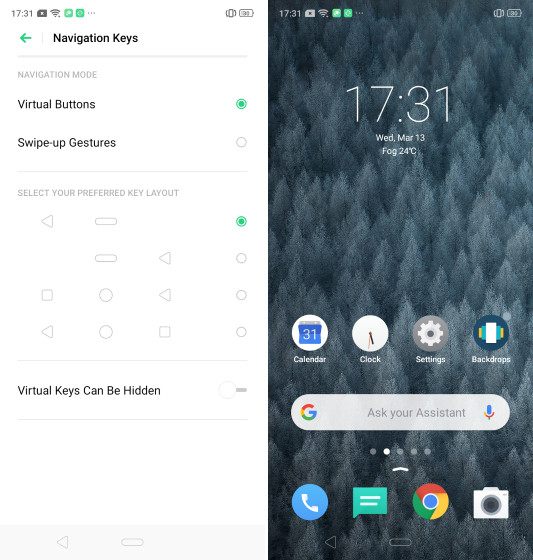 Oppo has always kept the Game Space app as a part of ColorOS to make gaming more distraction-free for its users. With the ColorOS 6, the Game Space app is gaining superpowers. The app now gives you access to more information and offers more features. For example, now you can see, the expected battery life of phone while gaming, the signal strength of the network, and more. Game Space also promises gaming performance enhancements by bringing features like “Smoothness Optimization” which smartly allocate system resources to make games run smoother, “Reduce Network latency” which optimizes data network to reduce network latency and more. 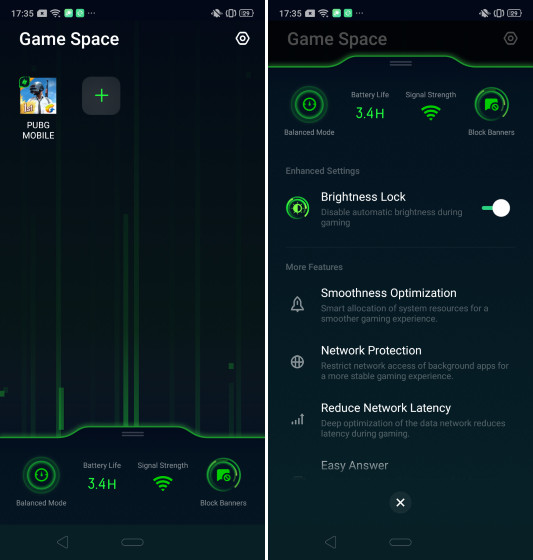 Do you notice your phones get slow as time passes and the more you use them? This happens because the system is unable to allocate the resources properly. So the same phone which was fast when you purchased it starts feeling slower even though it has the same hardware. Oppo is aiming to solve this problem by bringing a new technology called “Hyper Boost”. As a part of the ColorOS 6, Hyper Boost will improve smartphone management by intelligently managing and allocating system resources. 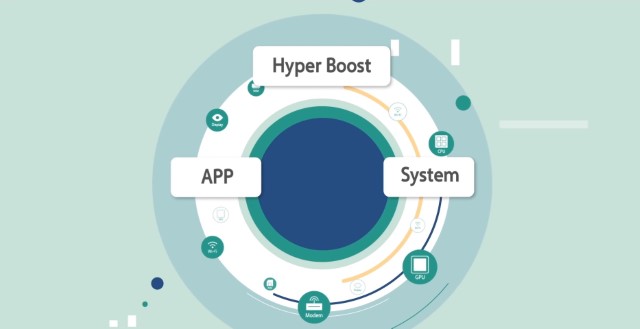 There are three parts of Hyper Boost which are System Boost, App Boost, and Game Boost. The System Boost ensures that performing basic system level functions such as launching the camera, navigating the UI and phone startup happens smoothly. As per Oppo, the photo restart time should feel 30% faster than the previous version of ColorOS. App Boost will improve the launching of apps. It will intelligently predict the app you are going to launch and will redirect system resources so it launches faster. Finally, Game Boost will improve gaming performance and network stability when you are playing games.

Google introduced the Driving Mode with Android Pie which automatically enables Android Auto and disables notification when it detects that you are driving. The same feature has been introduced with ColorOS 6. Dubbed as the “Riding Mode”, the feature mutes all notifications and automatically text back to decline calls. This is a handy feature for enabling distraction-free driving and should be present on all smartphones. 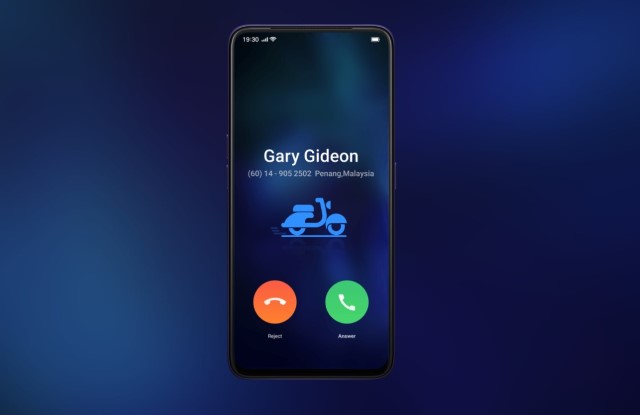 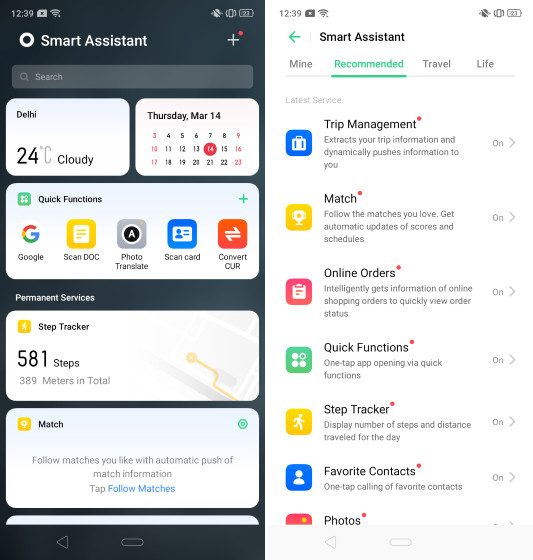 ColorOS 6 Update: Is it Any Good?

I love the new ColorOS 6 update and feel that Oppo has taken the steps in the right direction. Not only the company has made the ColorOS more nimble but it has also taken various steps to bring it closer to the stock Android experience. ColorOS no longer feels like a cheap imitation of iOS but as a cool custom Android skin which users are going to love. What do you think about the new ColorOS 6.0 update? Let us know in the comments section below.

Here’s How You Can Remove Ads From ColorOS 6

Watch These Hilariously Bad ColorOS Ads If You Dare