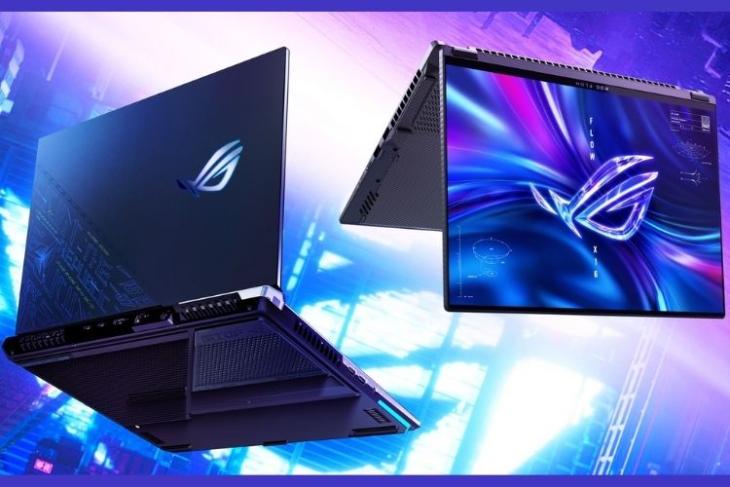 After refreshing its ROG Strix and TUF gaming laptops with the latest components from Intel and AMD earlier this year, Asus has now announced two new laptops in the premium segment. The new ROG Flow X16 and the Strix Scar 17 SE (Special Edition) come with the latest AMD and Intel processors, RTX GPUs, and more. So, let’s check out the details below.

Asus introduced the ROG Strix Scar 17 2022 Edition at CES earlier this year. However, the Strix Scar 17 SE or Special Edition comes with even more powerful internals and advanced specs as compared to the earlier model.

Starting with the design, Asus has always been creative with the outer designs of its premium laptops, and the story is no different with the Strix Scar 17 SE. On its top lid, there is a text-based design with a special invisible ink that Asus developed. In normal lighting, the design looks muted but under a blue LED or a UV light, it glows in a green-blue color theme. Asus will also include a compact UV torch inside the box of the special edition Strix Scar 17. Furthermore, by taking a closer look at the design, users could uncover a secret message for a mini-game named SCAR Runner.

Coming to the display, it comes with a 17.3-inch Full HD 360Hz display or a QHD 240Hz panel. Under the hood, the Strix Scar 17 packs the latest 12th-Gen Intel Core i9-12950HX, which Intel introduced earlier this month for content creators. It has a base TDP of 55W and comes with 16 cores and 24 threads to deliver powerful performance using up to 175W of power.

Furthermore, Asus has integrated a more powerful RTX 3080 Ti GPU that can now use up to 175W of power using Dynamic Boost, and there is also a MUX switch to switch to the discrete GPU and disable the integrated graphics processor of the CPU. There’s support for up to 64GB of DDR5 4800 MHz RAM and up to 4TB PCIe 4.0 SSD storage.

With all the powerful and power-hungry components inside, Asus had to think of a new cooling system for the Strix Scar 17 SE. So, in collaboration with Thermal Grizzly, it designed a special thermal compound, which the company is calling “Conductonaut Extreme.” This compound is applied to both the CPU and GPU of the device to keep them cool during heavy operations. Asus says that it saw a reduction of up to 15-degrees using the new thermal paste as compared to the regular Thermal Grizzly paste.

Moreover, the company has also redesigned the 330W power adapter of the device to make it 34% smaller and 27% lighter than the adapter of the Strix Scar 17 2022 Edition. The laptop has a 90Whr battery. As for the ports, it includes a Thunderbolt 4 port, an HDMI 2.1 port, a 2.5Gb Ethernet port, two USB-A ports, and a 3.5 mm combo audio jack. Additionally, it comes with four speakers with Dolby Atmos, a backlit keyboard, and more.

The ROG Strix Scar 17 will run Windows 11 Pro and come with other Asus programs like the feature-packed Armory Crate software and Asus support. It will be available in the third quarter of 2022 and start at £4,000 (~Rs 3,84,250) for the base model.

Coming to the ROG Flox X16, it comes as a successor to last year’s ROG Flow X13 and features a bigger 16-inch screen with a 16:10 aspect ratio. It is a convertible 2-in-1 device that features a 360-degree hinge and various physical modes like tent mode, tablet mode, and the standard laptop mode.

Starting with the display, Asus has added its ROG Nebula HDR display, which is the company’s moniker for a Mini-LED panel, to the new Flow X16. It is a QHD+ panel with support for a 165Hz refresh rate and 1,100 bits of brightness. The panel also has 512 local dimming zones, covers 100% DCI-P3 color gamut, and is Pantone-validated. It also supports touch and stylus input. There is a 16-inch QHD 165Hz option too, with the Mini-LED part and support for the brightness of 500 bits.

Under the hood, the Flow X16 packs the AMD Ryzen 9 6900HS CPU paired with up to Nvidia GeForce RTX 3070 Ti GPU. Users can also use Asus’ ROG XG mobile eGPU to add more graphical power to the device. There is also a MUX switch to shift the entire graphics rendering processing to the discrete GPU and disable the integrated one.

Asus has also integrated a new “Frost Force” cooling system and Thermal Grizzly-made liquid metal thermal compound into the device to keep the Flow X16 cool during heavy operations and long-session gaming. There are three cooling fans, a large heatsink running across the entire laptop, and multiple heat pipes to direct the heat away from the internal components.

As for the price and availability of the new ROG Flow X16, Asus has not yet shared the details. We expect the device to arrive at the end of the year. Stay tuned for further updates, and let us know your thoughts on the new Asus laptops in the comments below.