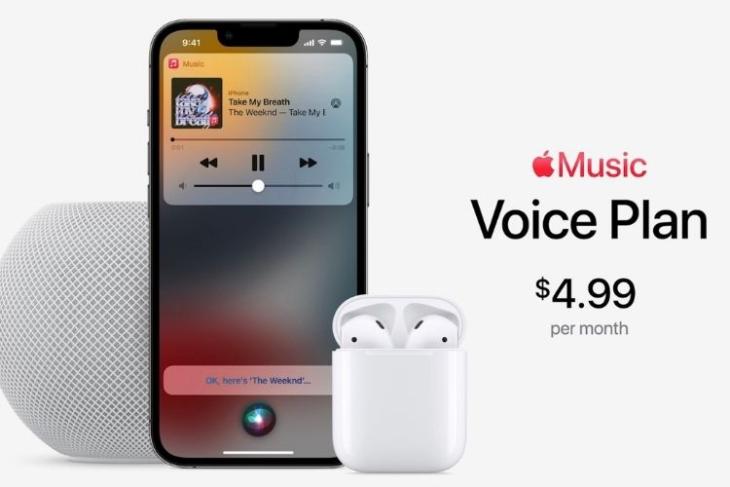 While the new MacBook Pro models with the more powerful M1 Pro and M1 Max chips are the highlight of Apple’s ‘Unleashed’ hardware event, the company also made a few audio-centric announcements today. Alongside the unveiling of the new AirPods 3, the company has announced a new voice-only Apple Music subscription plan. Confused as to what that means? Well, let me clarify that for you!

Apple Music currently offers two subscription plans – a $9.99/ month Individual plan and a $14.99/ month Family plan. The Cupertino giant has introduced a cheaper $4.99/ month Voice plan at the event today. While it sounds great for the users, there’s a big caveat here.

You can only use your voice and Apple’s Siri voice assistant to control music playback on your devices. You can access the entire Apple Music catalog and the new curated mood and activity playlists, but only via voice commands. You will need to get one of the more expensive subscriptions to use Apple Music on your Android device or manually play songs as per your liking.

“With Siri actively used on hundreds of millions of devices worldwide, we are thrilled to add this new plan that delivers an effortless music experience just by using your voice and makes Apple Music accessible to even more people around the world,” said Oliver Schusser, Apple’s VP of Apple Music and Beats in an official blog post.

Moreover, the HomePod mini now comes in three colors (yellow, orange, and blue) apart from the existing white and space gray. It will be sold at $99 and offer the same experience as the existing color variants.