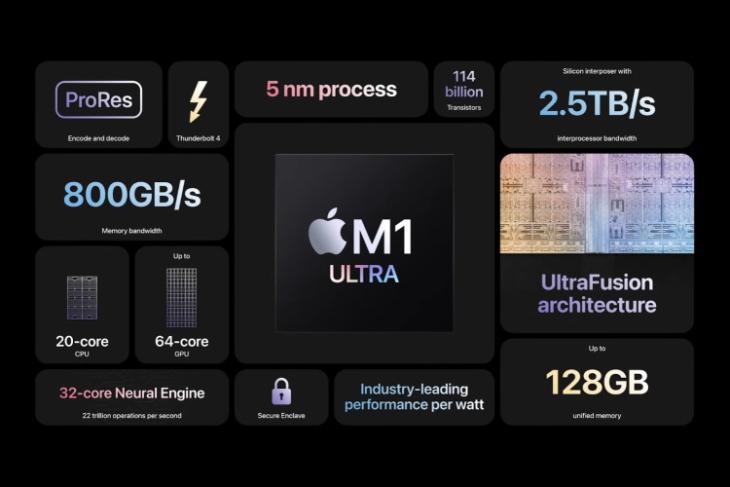 Apple launched its first in-house silicon with the release of the Apple M1 chip back in November 2020. The company then added the M1 Max and the M1 Pro to its chipset portfolio, powering the notched MacBook Pro models earlier last year. And now, at its first 2022 launch event, Apple has unveiled yet another M1-series chip. Dubbed the Apple M1 Ultra, this chipset is the most powerful one among the M1-chipset series. It’s also one of the most innovative, so let’s look at all the details.

The highlight of the Apple M1 Ultra is the fact that it’s made up of two M1 Max chips. Yeah, you are reading it right. Apple has employed a breakthrough architecture technology called UltraFusion in the development of this chipset. The company has fused two Apple M1 Max chips together to create a single, flagship-grade chipset in the form of the M1 Ultra.

What are the benefits of the UltraFusion architecture, you ask? Well, it allows us to get rid of the latency, bandwidth, and power efficiency issues witnessed when you connect two chips via the motherboard. Apple boasts that the M1 Max chip supports a die-to-die interconnect technology, which enables the company to join two chips and deliver double the performance. “This multi-dye architecture is ahead of anything else in the industry,” said Johny Srouji, SVP, Hardware Technologies, Apple.

The M1 Ultra includes 114 billion transistors (7x the count on the original M1 chip), supports a low-latency 2.5TB/s interprocessor bandwidth, and up to a whopping 128GB of unified memory.

Now, many of you must be wondering, what are the hardware specifications of the Apple M1 Ultra? You get a 20-core CPU on the M1 Ultra with 16 high-performance cores and 4 high-efficiency cores. This chipset also doubles the integrated GPU spec of the M1 Max, meaning you have a 64-core GPU on the M1 Ultra. It supports 8192 concurrent units, 21 teraflops of processing power, and a lot more.

While the on-paper specifications sound mind-boggling, Apple also made some tall claims on stage at its 2022 Spring Event. The Cupertino giant claims that the M1 Ultra chip delivers better CPU performance than the latest 16-core desktop processors from its competitors. That’s not all, though. Apple also boasts that its chip consumes 100W less power. As for the GPU, Apple compares the 64-core GPU with a leading GPU maker’s highest-end product (ahem, Nvidia) and claims that it delivers comparable performance with 200W less power usage.

A common question that many users will have with the launch of this new processor is – which is the first product or device powered by the Apple M1 Ultra chip? And the answer is the Apple Mac Studio. “M1 Ultra is the next giant leap for Apple silicon, delivering breathtaking performance to Mac Studio,” says the company in an official blog post. More information on the Mac Studio and the Studio Display will be shared in a dedicated article soon, so stay tuned.