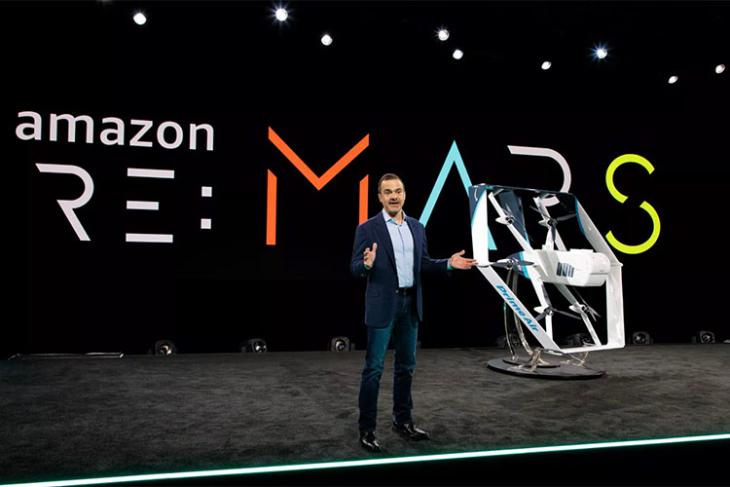 Upping the ante for its rivals, Amazon on Wednesday unveiled its latest and Next-Gen Prime Air drone that can fly up to 24 km and deliver packages under 2.5 kg to customers in less than 30 minutes.

The drone would start shipping packages within months, starting with the US.

“With the help of our world-class fulfillment and delivery network, we expect to scale Prime Air both quickly and efficiently, delivering packages via drone to customers within months,” Jeff Wilke, CEO of Amazon Worldwide Consumer, told the audience at its “Re: Mars” event here.

A hybrid design, it can do vertical takeoffs and landings – like a helicopter.

“It’s efficient and aerodynamic – like an airplane. It also easily transitions between these two modes – from vertical-mode to airplane mode, and back to vertical mode,” informed Wilke.

The new Prime Air drone employs diverse sensors and advanced algorithms, such as multi-view stereo vision, to detect static objects like a chimney.

To detect moving objects, like a paraglider or helicopter, it uses proprietary computer-vision and machine learning algorithms.

The drone needs a small area around the delivery location that is clear of people, animals, or obstacles.

“We determine this using explainable stereo vision in parallel with sophisticated AI algorithms trained to detect people and animals from above,” emphasised the Amazon executive.

Wire detection is one of the hardest challenges for low-altitude flights.

“Through the use of computer-vision techniques we’ve invented, our drones can recognize and avoid wires as they descend into, and ascend out of, a customer’s yard,” said Wilke.