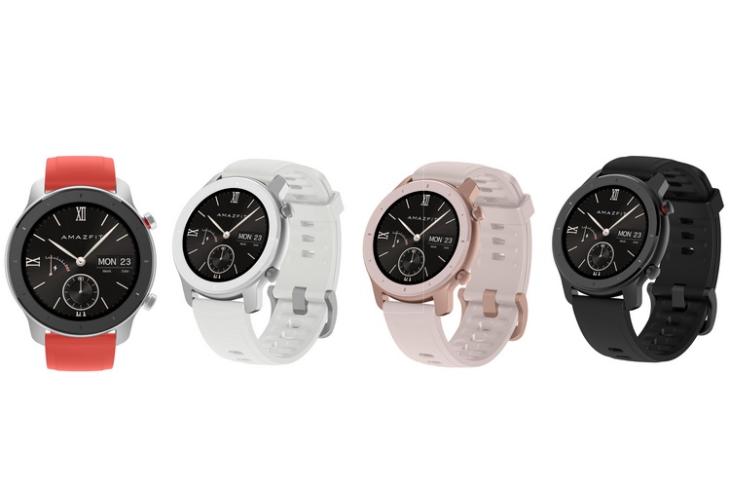 Just a couple of weeks after launching the 47.2mm version of its Amazfit GTR smartwatch in India, Huami has launched the 42.6mm version of the device in the country. In a press release on Wednesday, the Xiaomi-backed Chinese firm said that the device will be offered in “attractive designs and multi-color variations for women”. The device was originally unveiled last July alongside a Swarovski Edition with crystal encrusted bezels, although, that doesn’t seem to have made its way to India.

The smaller iteration of the Amazfit GTR comes with a 1.2-inch (390×390) display instead of the 1.39-inch (454 x 454) panel on its bigger compatriot. Another notable difference is the battery, which differs significantly between the two models. While the bigger one comes with a 410mAh LiPo battery with up to 24-days battery life, the newly-launched device carries a 195mAh LiPo battery with only up to 12-days battery life.

Apart from that, the hardware specs and software features remain almost identical for the most part, including Corning Gorilla Glass 3 protection and compatibility with devices running Android 5.0 or above and iOS 10 or higher. The GTR also comes with 5ATM certification, which means it is waterproof up to a depth of 50 meters. The device comes with twelve sports modes, including swimming, walking, running, climbing, skiing, trail running, mountaineering, workout and more.

It also has BioTracker PPG bio-optical sensors for 24-hour heart rate monitoring. There’s also sedentary reminder, all-day health monitoring, sleep analysis and other advanced health features. Connectivity options include Bluetooth 5.0 LE and GPS+GLONASS. While the Chinese model also gets an NFC chip, there’s no mention of that in the Indian model. Sensors include a 6-Axis Accelerometer, a 3 Axial Geomagnetic sensor, an air pressure sensor, a Capacitive sensor and an Ambient Light sensor.

The Amazfit GTR 42.6mm is priced at Rs. 9,999, which is significantly higher than its 799 yuan (around Rs, 8,000) price-tag in China. Like its bigger sibling, it will also be available exclusively on Flipkart, but unlike the former which is already available for purchase, this one will go on sale as part of the e-tailer’s upcoming Big Billion Days festive sale next week. It will be offered in starry black, cherry blossom pink, moonlight white and coral red colors with silicone straps, said Huami.