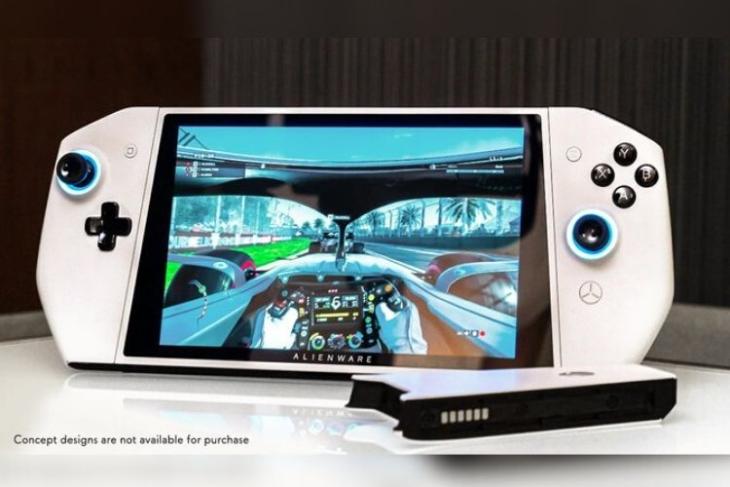 With the widespread success of Nintendo Switch, more and more technology giants have been trying to figure out a way to bring portable gaming to users. Alienware is the latest company to take a shot at this with its “Concept UFO” prototype, which was shown off at CES 2020.

One look at the Alienware Concept UFO is enough to realize that it’s inspired by Nintendo Switch. Just inspired. The company has added its own touch to this handheld gaming PC, with a white plastic finish, angular design, hexagon air vents, and a robust build one will definitely associate with its gaming laptops.

As you can see in the image above, Concept UFO boasts an 8-inch (1200p) display at the center. It’s the main unit that houses all the essential components, including the CPU, GPU, and battery. Alienware currently hasn’t shared the internal specifications but we can expect the company to talk about it on stage at its keynote tonight.

The central display is flanked by two controllers, which look similar to Nintendo’s Joy-Con controllers. They’re detachable and can be connected together to form a single controller. You can then use either of the two USB Type-C ports on board to connect the screen to a monitor or display to enjoy games on a larger screen. There’s a kickstand on the rear to prop-up the central unit.

Now, coming to one of the most important aspects of a handheld gaming machine – what all games can it run? What’s the software baked into the Concept UFO? Well, Alienware is taking a simple approach here. Concept UFO runs Windows 10 (yeah, the full-fledged PC version of Windows 10 we love and not a slimmed-down variant) with a custom launcher.

You can directly launch games via this game launcher and as The Verge points out, it will power up the game via Steam if that’s where the title lives. This means you can head to Steam and install any of your favorite games to play on the go. The publication was able to test titles such as Rocket League and Mortal Kombat 11 with the gameplay being “smooth and lag-free.”

Alienware Concept UFO is slightly bulkier than the Nintendo Switch and still pocketable. I mean, it’s portable and all but we’re skeptical of how graphics-intensive games can it run as the company was shy in sharing the internal hardware specifications. This is currently only a prototype device, so it remains to be seen whether Alienware can bring this to life later in 2020 to carve a space for itself alongside the Nintendo Switch.