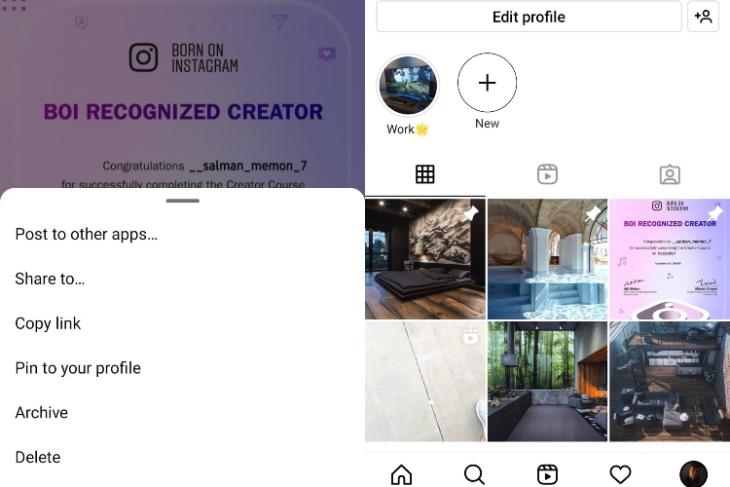 After rolling out the chronological feed on Android and iOS late last month, Instagram has now started testing the ability to pin posts on a user’s profile. The feature will let you pin up to three posts, say three of your favorite images, at the top of your Instagram profile to highlight them to your visitors. Check out the details below to find out more.

Instagram To Soon Let You Pin Posts on Your Profile

According to recent reports, Instagram has started allowing some users to pin Instagram posts at the top of their profiles using a new “Pin to Your Profile” option. Last weekend, an India-based Instagram user took to Twitter to report that the new button has started appearing for their IG posts. You can check out the tweet attached right below.

The feature is similar to Twitter’s pinned tweet option that lets users pin a specific tweet at the top of their profile to highlight it. On Instagram, users will be able to pin their best-performing posts, favorite pictures, or product videos to highlight them to their visitors. For those who don’t know, Instagram already allows users to pin comments too.

This comes in addition to the rumored Edit Grid feature on Instagram, which will allow users to rearrange their photo grid to help users keep their favorites photos and videos on top while the rest can slide down. This hasn’t been rolled out yet.

It is also worth mentioning that the “Pin to Your Profile” button was spotted by the reputable reverse app engineer Alessandro Paluzzi earlier this year. In a follow-up tweet in February, the tipster reported that Instagram was continuing to refine the feature by adding the ability to pin up to three posts on profiles.

Now, it seems like the Meta-owned social giant has started rolling out the feature to select users in India, and possibly, other countries. As of writing this story, it is not available for me, unfortunately. However, we expect Instagram to reveal more details on this feature and roll it out to all users soon. So, stay tuned for further updates. Also, let us know in the comments if you have received this feature on your Android or iOS device.