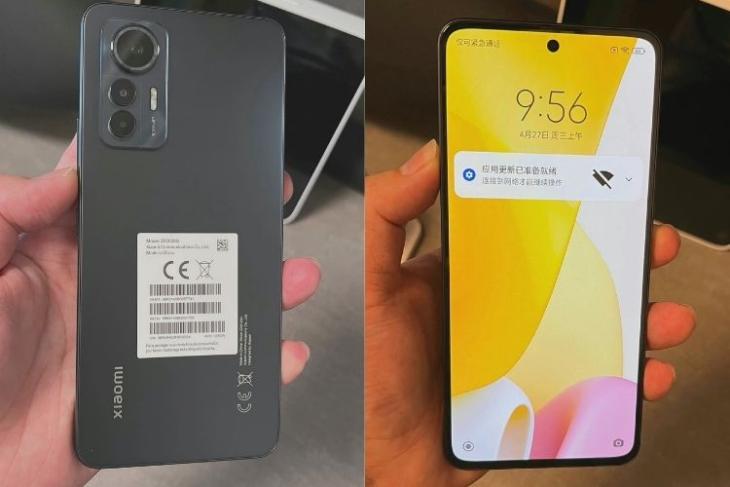 Xiaomi 12 series currently consists of three devices, but we know the company won’t be limiting it to that. The Xiaomi 12 Lite model, a successor to the Xiaomi 11 Lite (previously Mi 11 Lite), has been in the news previously and has now been showcased in leaked images. These images hint at a different design than the existing Xiaomi 12 phones. Here’s a quick look.

This Could Be the Xiaomi 12 Lite

A bunch of real-life hands-on images have surfaced on Weibo, and they seemingly belong to the Xiaomi 12 Lite. The smartphone is spotted with the model number “2203129G.”

If you go by the images, the Xiaomi 12 Lite adopts a flat-edge design, which is missing from the other Xiaomi 12-series models. The rectangular rear camera hump is still there but the Lite variant goes for bigger camera housings to stand out a bit. From the looks of it, we can expect the phone to flaunt a lightweight design, much like its predecessor.

A center-placed punch-hole screen will be included too. There’s also an uncanny resemblance to iOS in the leaked image, thanks to the iOS-like widgets, arrangements of apps, and more. For a second I thought it was an iPhone! Have a look and let us know your thoughts on this.

The Xiaomi 12 Lite is seen in a matte black hue and could most likely have a plastic build. We expect more color options to come once the smartphone becomes official. There’s also the image of a Geekbench listing that shows a single-core score of 788 and a multi-core score of 2,864.

We may not have access to official details, but there are some rumors to look at. As per a previous leak, the Xiaomi 12 Lite is expected to be powered by a Snapdragon 778G, much like the Xiaomi 11 Lite NE 5G. It is likely to come with the same 6.55-inch AMOLED display but with a 120Hz refresh rate.

Three rear cameras, including a 64MP main camera, an 8MP ultra-wide lens, and a 5MP macro camera are also expected. But, this time, OIS support will also be available. A 16MP selfie shooter is expected to replace the 20MP front camera on the Xiaomi 11 Lite NE. Other changes include a bigger 4,500mAh battery with faster 67W fast charging, Android 12 with MIUI 13 on top, and more.

However, it’s worth noting that the aforementioned details are rumors and we still need to wait for some concrete information to emerge. We will let you know once this happens, so stay tuned. Also, do tell us how you like the Xiaomi 12 Lite design in the comments below.