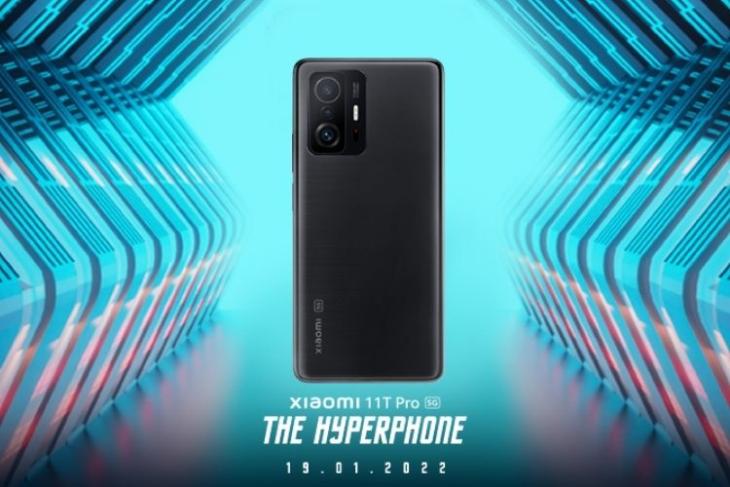 Xiaomi is launching the Xiaomi 11T Pro in India on January 19, and calling it the “Hyperphone.” The smartphone, which officially made its entry in the global market a few months ago, will be the company’s second phone with 120W fast charging support in the country. Here’s a look at what to expect.

Xiaomi has revealed the Xiaomi 11T Pro India launch date via an official Twitter post. As one would expect, the smartphone will launch via an online event in the country next week. More details are expected to be out soon.

The tweet doesn’t reveal much about the device, except for the design. Much like the global variant, Xiaomi 11T Pro will flaunt a rectangular camera hump, big camera housings, and a punch-hole screen. It is confirmed to feature three rear cameras.

As for the specs, we can expect it to be similar to the one launched globally. For those who don’t know, the Xiaomi 11T Pro spans 6.67-inch and has a Full HD+ AMOLED panel. It supports a 120Hz refresh rate, a 20:9 aspect ratio, a peak brightness of 1000 nits, a touch sampling rate of 480Hz, and HDR10+ certification. The phone is powered by last year’s Snapdragon 888 mobile platform, coupled with up to 12GB of LPDDR5 RAM and 256GB of UFS 3.1 storage.

This is another Xiaomi phone with a 108MP main camera. There’s an 8MP ultra-wide camera, a 5MP tele-macro camera, and a 16MP in-display front camera too. The device comes with various camera features such as night mode, long exposure mode, 8K videos, slow-motion videos, and more.

The Xiaomi 11T Pro is backed by a 5,000mAh battery with 120W HyperCharge technology, which claims to fully charge the phone in just 17 minutes. This will be the second Xiaomi phone in India with 120W fast charging after the Xiaomi 11i HyperCharge. It runs MIUI 12.5 based on Android 11. There’s support for a LiquidCool tech, a side-mounted fingerprint scanner, NFC, and dual speakers with audio by HARMAN Kardon and Dolby Atmos. Furthermore, the 11T Pro supports dual-SIM 5G, Wi-Fi 6, and more.

There’s no word on the Xiaomi 11T Pro price in India. However, considering its global price (starting at Euros 649), we can expect it to fall under Rs 50,000 in the country. Since this is a mere guess, it’s best to wait for the official launch to get a conclusive idea. So stay tuned for more updates.