The all-new Xbox Series X will have a brand new logo that was officially trademarked by Microsoft last week. Posted on American legal information website, Justia, the new logo shows off a stylized ‘X’ next to the word ‘Series’ in a vertical formation. It is believed to have been first discovered by u/LemonMintHookah on the Xbox Series X sub-Reddit (r/XboxSeriesX). The trademark covers a wide-range of goods and services, including not only PC hardware and software, but also bags, jewellery, apparel, coffee mugs and more. 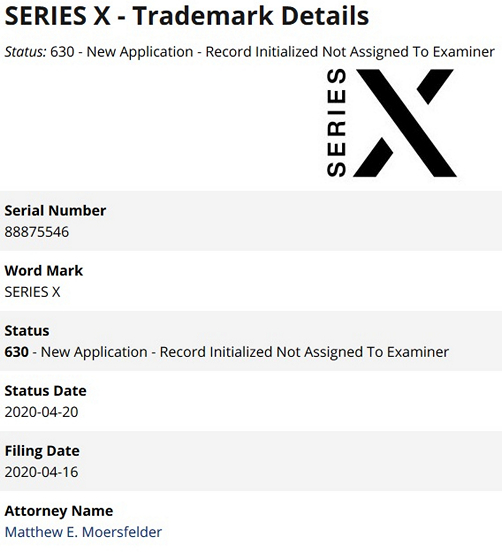 Microsoft, last December, finally unveiled Xbox Series X, its next-gen gaming console that was being rumored incessantly as ‘Project Scarlett’ over the past couple of years. The company went on to announce the full tech-specs of the device last month, confirming a custom AMD Zen 2 octa-core CPU clocked at 3.8GHz and a massive 12 teraflop custom RDNA 2 GPU with GDDR 6 RAM.

The console will come with up to 1TB of NVMe SSD storage that will be expandable by up to a further 1TB with an external data card. It will also support a whole host of cutting-edge features, including ray-tracing, variable rate shading, and more. It will also be backwards compatible with games released for earlier Xbox consoles, as well as support cross-generation multiplayer gaming.

It’s not immediately clear if the logo will appear on the retail packaging of the Xbox Series X, because the renders published by Microsoft doesn’t seem to show off the logo on the actual console. Either way, now that most of the details about the Series X has been revealed, it will be interesting to see when the company will unveil the ‘Xbox Series S’, the less-powerful, but more-affordable console developed under the codename, ‘Lockhart’.