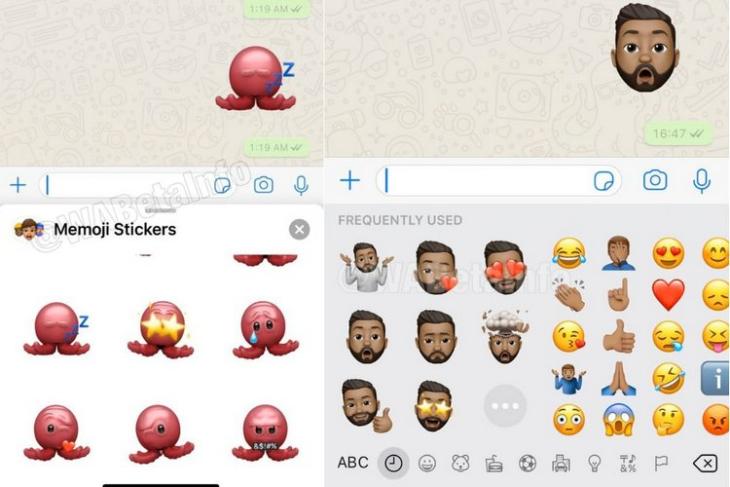 The latest beta version of WhatsApp on iOS brings support for Memoji Stickers to iPhone X-series devices. It also brings the ‘WhatsApp From Facebook’ re-branding that had been rolled out on Android recently. Believed to have been first reported by WABetaInfo, the tag is visible under WhatsApp’s Settings, and is part of the social media giant’s plans to eventually unite its messaging services under one single name.

As mentioned already, the biggest change in the new beta on iOS is the app’s support for Memoji Stickers. Once the app is updated to the latest version, the stickers can be chosen from a dedicated ‘Memoji’ section that can be found alongside the regular emojis. They also show up in the frequently-used section as well, as can be seen from the screenshots above.

WhatsApp has been adding several new features on both Android and iOS, and one of the most popular ones is the support for biometric authentication to lock and unlock the app. Rolled out earlier this month to the beta version of the app on Android, the biometric locking option was earlier rolled out on iOS and, enables users to lock the the app with Face ID on newer iPhones or a fingerprint on Android devices and older iPhones.

As for the ‘WhatsApp from Facebook’ re-branding, it’s part of a concerted effort by the social media giant to mark its territory and let everyone know who owns the platform. Alongside WhatsApp, the ‘from Facebook’ branding was also added to Instagram, with the new names slated to appear in the title for both apps in the Apple App Store and the Google Play Store.

Xiaomi Denies Allegations That its ‘Mimojis’ are Copied From Apple ‘Memojis’