Everyone has important data on their computers, and no matter which hard disk or SSD you use, there are chances of disk failure that results in data loss; that is exactly why we create backups. The thing with backups, though, is that you need to restore data from them, back into your computer. Why not use a fault-tolerant setup, instead? RAID is a combination of multiple disks that can be set up to be fault tolerant, in a sense. So that if one or more of the disks in the RAID volume fail, your data is still available to you.

In this article we’ll get you up to speed on what RAID actually is, and how you can use it to either keep data safely backed up, or to increase the read/write speed on the internal as well as external disks. 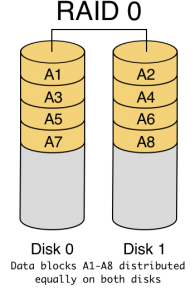 What RAID basically does is it allows you to combine two or more (hence the “Array”) disks for purposes such as fail-safe backups, increasing read/write speed and the likes. 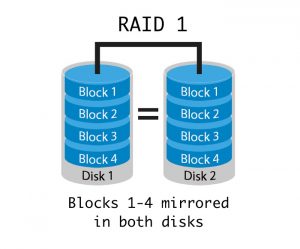 RAID has various types (or “levels” as they are called).  There are six of these, but Mac only allows for two (there’s a third option, but it’s not really a RAID setup). These are described below:

Now that we have given you a basic idea of what the various levels are, let’s dive headfirst into some RAID fun.

How To Setup RAID on Your Mac

Before Apple came out with OS X El Capitan, the process to set up RAID volumes was very simple. The graphical “Disk Utility” app on the Mac had a simple option to RAID a number of drives into either level 0,1 or to concatenate the drives (CDS/JBOD). When Apple redesigned the disk utility in OS X El Capitan, they quietly removed the RAID option. Why they did this is not what we are here to discuss. Instead, we are presenting the solution to your RAIDing problems in El Capitan.

Let’s dive into our trusted Terminal app. Turns out, the “diskutil” command has a “appleRAID” sub-command for creating RAIDs.

The syntax for the command:

Before we get cracking on the command, you’ll need to figure out which disks you want to RAID.

1. Connect the disks to your computer and launch Disk Utility.

2. From the left pane, select your disks and note down the value of the “device” property. You’ll have to enter this in the Terminal.

4. Replace the keywords with stripe (for RAID0), mirror (for RAID 1) and concat (for CDS/JBOD).

5. Let the command run, and on completion, OS X will automatically mount your RAID volume and you can find it in Disk Utility.

SEE ALSO: 8 Useful FFmpeg Commands You Should Use on Your Mac

Ready To Create RAID Volumes on Your Mac?

We think RAID volumes can be useful for a lot of people, as they can be set up to not only create backups automatically but also to increase the read and write speeds of the drives. So, if you have a couple of disks lying unused, you should try turning them into a RAID volume, play around with them and see if it makes a difference. Don’t forget to let us know about your experience in the comments section below.

macOS Sierra Vs. OS X El Capitan: Everything You Need To Know