If you look inside the applications folder on your laptop, you would probably find applications dedicated to converting video files, ripping audio from video files, and a lot more. What if I told you that you did not really need all of those things, neither on your computer, nor as websites saved into your bookmarks for quick access to video conversion tools? There exists an alternative to all of those applications, and it is called FFmpeg. Before we get to all the awesome stuff FFmpeg commands can let you do on your Mac, you first need to know what it is, and how you can install it on your macOS computer. So, here goes:

FFmpeg is a command line/com utility that has a lot of powerful libraries and its various commands allow users to convert video files from one format to another, edit the aspect ratio of the video files, extract audio, and a lot more. However, the Terminal (or Command Prompt on Windows) is not a friend to everyone. Some people might simply find it too intimidating, or too complicated. That’s why, I am writing this article detailing the steps you will need to take to use various FFmpeg commands on a Mac (Sorry Windows users!) with ease. So read on, and get ready to appreciate the true power of the command line and FFmpeg commands.

To get it on your Mac, you’ll simply have to download FFmpeg off their website (it’s free!), and install it on your Mac. It’s pretty straightforward stuff. After you have set it up on your Mac, here are 8 useful FFmpeg commands for Mac:

We’ll take this one step at a time, starting from the simplest things that you can do with FFmpeg commands, and going up to some of the niche things that can be accomplished using the utility.

FFmpeg can convert videos to different formats with just one simple command. The command that you will need to achieve this, is:

Obviously, you will have to replace the filenames and the extensions according to the files that you have. For example, I converted an mp4 file, called “abc.mp4” to an avi movie, called “convertedabc.avi”, and the command looked like:

That’s all. FFmpeg will output a bunch of stuff on your Terminal that you don’t really need to bother yourself with, unless there is an error (which is rather rare), and you can find your converted video file in the Finder. 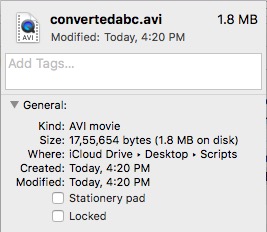 FFmpeg can also let you rip the audio from a video file. This basically uses the same command as above but you will need to specify an audio file format in the output. The command to do this is:

I ripped the audio from “abc.mp4” to an audio file “rippedaudio.mp3”, using the command:

H.265 is a newer encoding technique that results in massively reduced file sizes for the same quality videos. I’m not even exaggerating, if you look at video files downloadable over the internet, the same file in x264 and x265 encoded schemes will have drastically different file sizes. The FFmpeg command to achieve this, is:

Here are the screenshots of both the file sizes:

This is obviously a good way to encode video files, however, older computers might not be able to play the video files encoded in H.265.

FFmpeg also has the ability to edit the frame rate of video files. While this might not be a useful feature in regular use, it is a feature that is needed in special situations, and is definitely worth a shot, even if you do it just for fun. You could change the frame rate of a video to 1FPS and see how it plays back. The best part is that you can increase frame rate as well, and FFmpeg simply replicates the existing frames to make the frame rate higher and the video time remains the same. The command to achieve this is:

I changed the frame rate of “abc.mp4” to 1FPS and saved it as “abcfps.mp4” using the following command:

FFmpeg also allows users to take snapshots from videos, automatically, at a desired speed. You can use FFmpeg to take a snapshot from a video every second, and even specify the size of the image that is to be captured. FFmpeg can save these snapshots to any folder that you want it to, and automatically append sequential file names to the images, so you know the order in which the snapshots were taken. The command to achieve this is:

Note: The “%d” is a placeholder that FFmpeg uses to append numbers to. In this case, the images will be appended with numbers like 1, 2, 3 etc.

I took snapshots from “abc.mp4”, once every second, by using the command as follows:

Obviously, you can replace the “3” with whatever the time you want to use, in seconds.

Another cool thing that you can achieve using FFmpeg commands is the ability to use multiple images to create a video, kinda like a slideshow, but not exactly like a slideshow. This feature proved useful to me when I needed to edit every frame in a video and then convert it back into a video with the new images. Doing this manually would have obviously proven really difficult, but FFmpeg did this very easily, and allowed me to wander aimlessly, sipping coffee. Talk about goals.

The command to do this in FFmpeg is:

How about using the images we created in the last example to recreate abc.mp4? To do that, we can use the command as follows:

This is a feature that I don’t expect casual users to use, at all, but for people who need to edit the metadata of video files, this FFmpeg command can prove very useful. The command is not very complicated:

For example, if I wanted to add the metadata entry “Title” with the value “Akshay” to “abc.mp4”, I would use the command as follows:

The screenshot below shows the added metadata field in the new video file.

The 8 FFmpeg commands that I mentioned in the article are barely scratching the surface of the true power in FFmpeg. The tool is incredibly powerful, and very flexible. Multiple options can be combined together to get extremely customized functionality out of FFmpeg. I would definitely recommend that you go and read the documentation for FFmpeg, which is very detailed and contains a lot of functionality that I have not covered in this topic for the sake of simplicity.

As always, we would love to hear about your experience with FFmpeg commands, and your thoughts and comments on the best commands. Make sure you drop your opinions and thoughts in the comments section below.