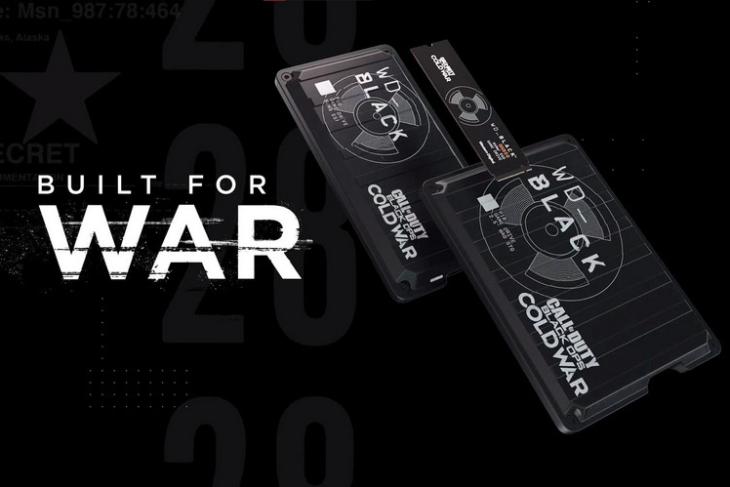 To capture the attention of Call of Duty fans, popular hard disk manufacturer, Western Digital (WD) had recently unveiled three new Call of Duty Black Ops Cold War-themed hard drive models. It is to celebrate the launch of the latest iteration of the game.

The American hard drive maker recently announced the custom COD-themed version of its existing P10, P50, and the brand new SN850. They look pretty clean and Western Digital hopes that these will catch the eyes of every COD fan in the world.

Hard Drives for the COD-Heads

For starters, the special edition P10 Game Drive only comes in a 2TB variant and costs $30 more than the regular base model, making it a $110 (~Rs 8,155) product. However, WD points out the fact that the P10 drive is compatible with the next-gen consoles from Sony and Microsoft, even though it supports only current-gen games.

On the other hand, the special edition P50 external USB-C-based NVME drive comes with a 1TB storage option and costs $50 more than its regular edition model. So, this makes it a $250 (~Rs 18,535) component. However, as there is no spec difference between the regular model and the COD edition, it delivers speeds up to 2,000Mbps.

So, with Call of Duty Black Ops’ massive storage requirements, WD’s COD-themed hard drives might become a huge success amongst Call of Duty fans. And that is what the company is hoping for.

You can check out the special edition Call of Duty C Black Ops Cold War-themed WD drives on the company’s official online store. WD plans to launch these products sometime in December.