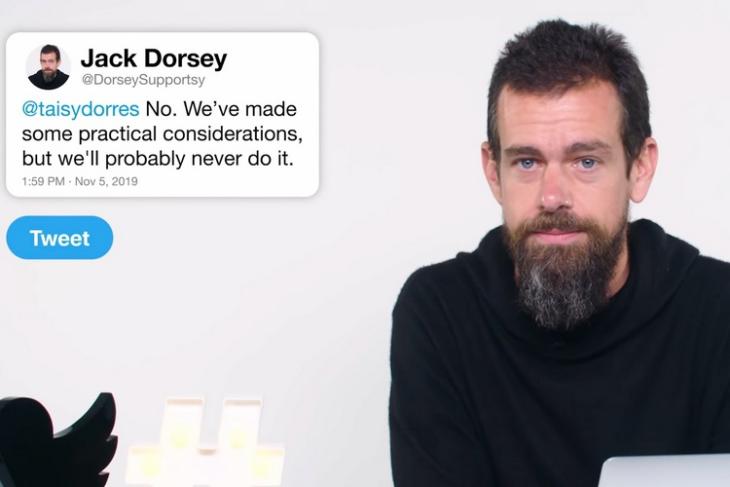 The ability to edit tweets has been one of the most-requested features for years, but maybe it’s time for users to accept that it’s unlikely to ever happen. That’s because in a recent video interview with Wired, Twitter’s founder and CEO, Jack Dorsey, said that while the company has considered introducing an Edit button, it has pretty much decided against implementing it because it goes against the very essence of the platform.

Answering a questing as to whether the site is planning to introduce an edit button for Twitter in 2020, Dorsey replied with a terse ‘No’. According to him, the ability to edit tweets will go against the very essence of the platform, which was envisaged as an alternative to text messaging, what with its 160 character limit and all. “We started as an SMS, text message service. And as you all know, when you send a text, you can’t really take it back. We (want) to preserve that vibe, that feeling”, he said.

While this isn’t the first time the subject has been raised in front of senior Twitter executives, the company has always seemed open to the idea, at least, publicly. When asked last year, Twitter Product Lead, Kayvon Beykpour, said that he believed the feature should be a part of Twitter at some point, “but it’s not anywhere near the top of our priorities”. While that might have led people to think that it was under active consideration, the latest developments might well have put paid to those hopes.

It’s worth noting here that it’s not just regular users who have been clamoring for the Edit button on Twitter, but celebrities like Kim Kardashian have also been vocal about the feature. At her husband Kanye West’s 41st birthday party in 2018, the reality star claimed to have lobbied Dorsey for an edit button on the micro-blogging platform, although, the latter is believed to have remained non-committal on the issue.