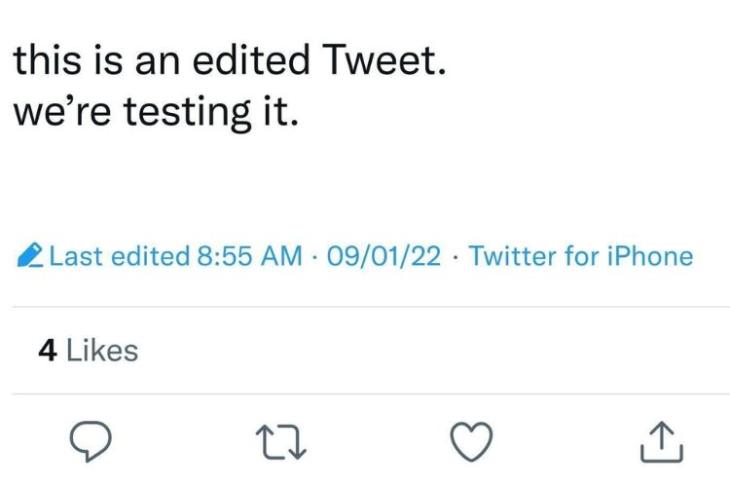 After heaps of rumors, Twitter, back in April, officially confirmed that it’s working on the much-requested Edit option. However, we never knew when the rollout will begin. The microblogging site is now taking a step in the direction and has revealed that it has officially started testing the Edit Tweet feature but there’s a catch!

Twitter has revealed that it is internally testing the Edit Tweet feature and will eventually expand it to Twitter Blue users later this month. Now the catch we talked about is that this will initially be a paid feature.

It will be a small group of people who will test the Edit option and after observing its implications and uses, Twitter will roll it out to more users, possibly the ones who use the app’s free version. The testing will happen in one country, however, Twitter hasn’t revealed the name.

Twitter, in a recent blog post, said, “Like any new feature, we’re intentionally testing Edit Tweet with a smaller group to help us incorporate feedback while identifying and resolving potential issues. This includes how people might misuse the feature. You can never be too careful.“

For the uninitiated, the Edit Tweet feature will allow users to rectify a tweet in case there are typos, factual/grammatical errors, or maybe, just to add the hashtags you forgot. This will be similar to how you can edit posts on Facebook and even Instagram and has been a highly requested feature on Twitter. It will be an option next to the posted tweets under the three-dotted menu.

Twitter will provide a 30-minute window to make the changes. So, there will be limited time! Once edited, the tweet will come with an icon, timestamp, and label, telling people about the changes made. Clicking on the label will let you check the Edit history.

It is revealed that the time limit and history are crucial to the Edit Tweet feature as they “help protect the integrity of the conversation and create a publicly accessible record of what was said.“

We still need a word on when Twitter will roll out the Edit Tweet option for all users. Whenever and if this happens, we will let you know. So, stay tuned, and do tell us your thoughts about the Edit option on Twitter in the comments below.