After lots of planning, the first crewed mission of SpaceX to the International Space Station (ISS) became successful when Bob Behnken and Doug Hurley took off in the Crew Dragon carried by the Falcon 9. However, apart from the two astronauts, there was another entity in that space shuttle that started to float as soon as they reached near the orbit of the Earth. This was Tremor, the Apatosaurus, which is a glittery plush toy with blue and pink sequins. Now, this toy dinosaur is out of stock in every online and physical store.

“We did end up with one stowaway onboard our vehicle when we launched today. It was not just Doug and I who accomplished the launch here. We do have an Apatosaurus aboard.”, said Bob Behnken, one of the two astronauts currently in the ISS.

Tremor is a six-inch-long plush dinosaur toy made by toy-makers Ty. It belongs to one of the boys of the astronauts from whom it went to space. Bob has a 6-year-old boy, Theo. On the other hand, Hurley has a 10-year-old son, Jack.

“We collected up all the dinosaurs between our two houses and ‘Tremor,’ the Apatosaurus, got the vote from the boys to make the trip into space today with us,”, Behnken added.

Now, if you think that the astronauts took Tremor to space just for its cuteness, then you should think again. The toy dinosaur was there with the astronauts to serve the purpose of a zero-gravity indicator. 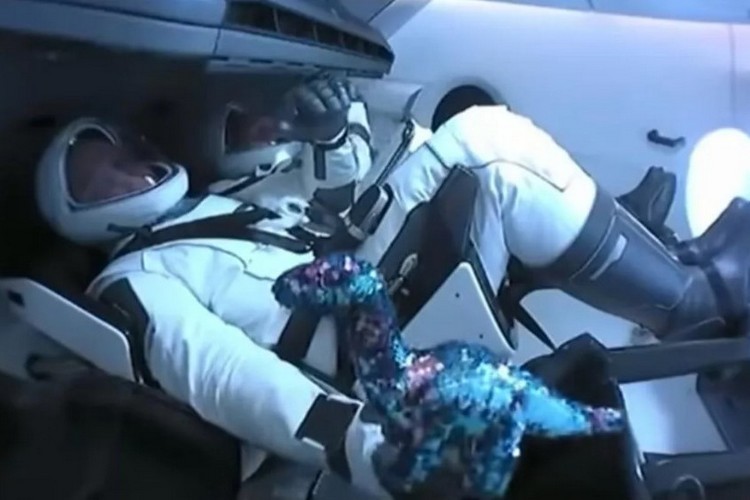 A zero-gravity indicator can be any light object that will begin to float once the space shuttle reaches the point of zero gravity. So, a floating “Tremor” indicated that the astronauts were feeling the sensation of weightlessness at that point.

Now, after getting just a glimpse of the blue and pink sequin Apatosaurus, many earthlings became its fan. After the launch, SpaceX’s online store was selling a knock-off version of the toy dinosaur for a brief period. However, it is not there anymore.

“Tremor” fans tried to buy the toy from other online stores that sell Ty’s collections such as Amazon, Joann Fabrics, and Michael’s. However, the space Apatosaurus was “out of stock” everywhere.

You can check out “Tremor” on Ty’s official website, which states that the Apatosaurus is now “in space”.