Choosing the best Bluetooth headset can be baffling and this gets even more challenging when you’re looking at the affordable segment. The market is already flooded with a lot of recognized as well as unrecognized brands and if the pedigree of a brand matters to you more than the utility of the products it produces, there are many options from legacy brands like JBL, Motorola, Philips, Sony, and some newer and popular ones like TAGG, Boat, etc.

In the middle of these brands lies Toshiba, the Japanese brand predominantly famous for its display and storage solutions, which has been testing the waters in the segment of personal audio. In this review, we will evaluate whether you should bank upon the brand’s 143-year old heritage and buy the Toshiba RZE-BT180H Bluetooth headphones for Rs 2,395 or instead pass it for an audio accessory that offers more value.

The box is made out of thin cardboard and has a transparent window, offering a peek at headphones inside. The low quality of the box leaves a poor first impression about the headphones and we’ll see in the later sections whether this is actually true or not. Inside, you get: 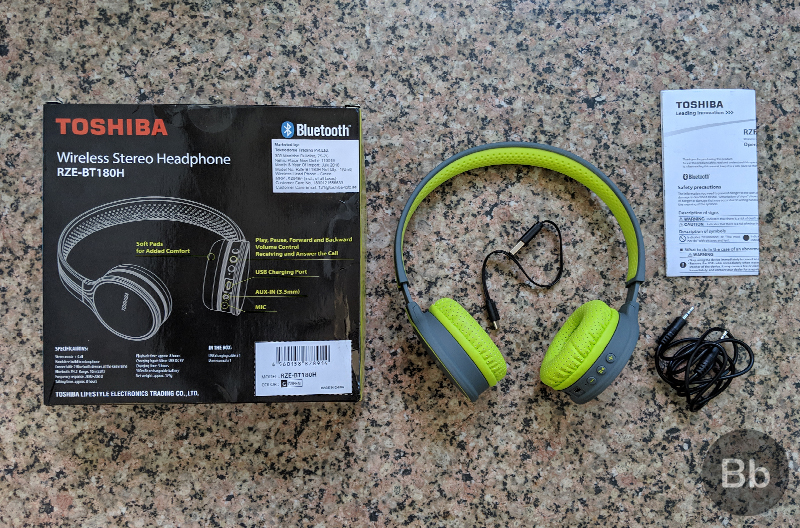 The experience after opening the box was just as lukewarm, and this is because the AUX cable supplied in the box appears to be of poor quality, and in case of our unit, the AUX cable did not even work properly. This appalling quality makes for a bad start, and coming from a well-known brand, this is really questionable and discomforting.

Let’s now see if the build and sound quality make up for the poor first impression on unboxing.

The most noticeable thing about the Toshiba Bluetooth headphones is the choice of the dandy, fluorescent colors including orange, green, blue, along with the relatively duller grey. We received the green unit for review and the dual-tone design makes the build of the headphones intriguing, if not exciting. But the feeling withers away as soon as one takes a closer look at the headphones. 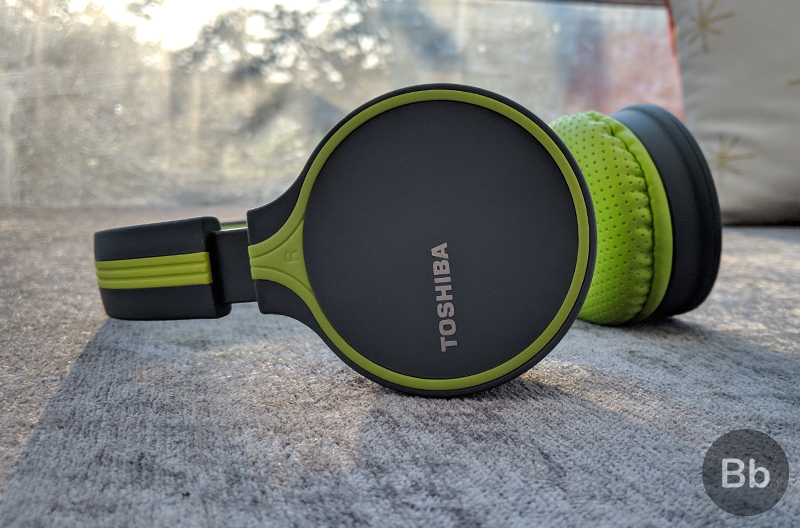 Toshiba has chosen a very disappointing quality of plastic for the construction while the fluorescent elements are made of rubber, stuck on with a poor adhesive, ready to come off with a small amount of force. There is a layer of this rubbery material cushioning the headband on the inside and the way this plastic feels reminds me of cheap chew toys for teething puppies and those are way more economical than the band. 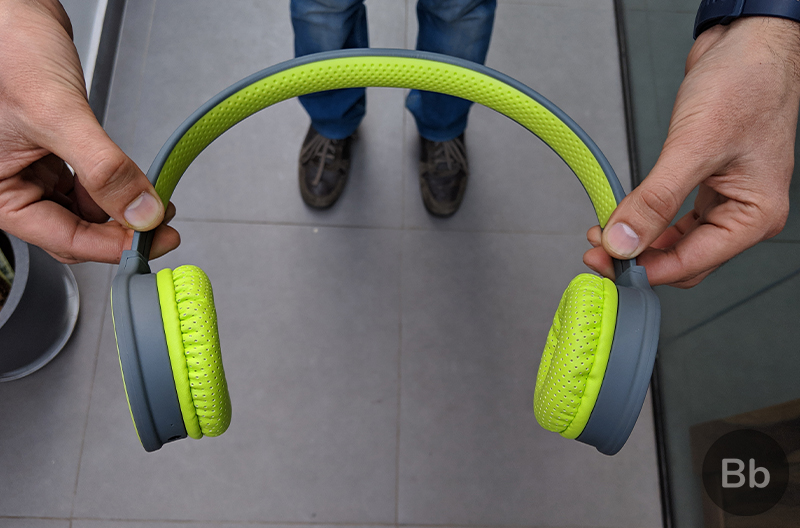 The plastic around the rest of the body also is utterly disappointing. Firstly despite its satiny finish, you don’t actually feel good about holding these earphones. The quality of this part is very similar to the cheap dashboard plastic used on base-model cars. 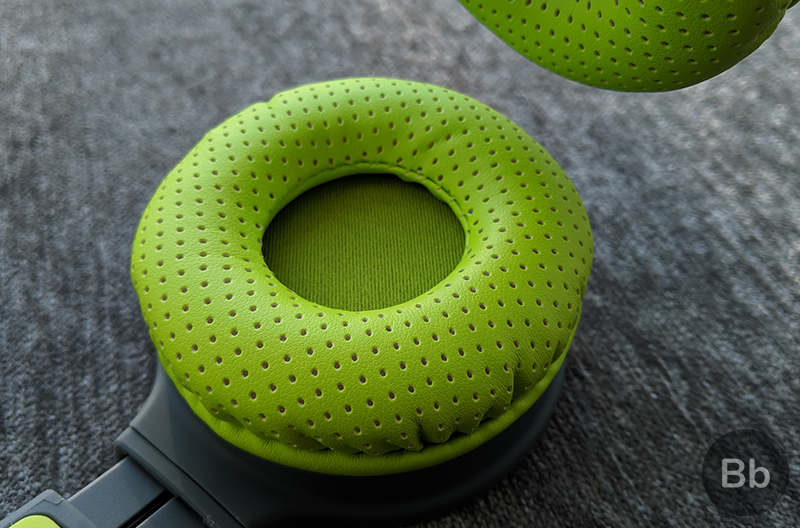 The headband in itself is very rigid and feels very uncomfortable while using. Besides the ability to extend the length of the headphone, there is not much one can do to fix the feeling of discomfort. The earcups are tiny and make the experience even worse, so much so that wearing the headphones for longer than an hour almost feels like a curse. 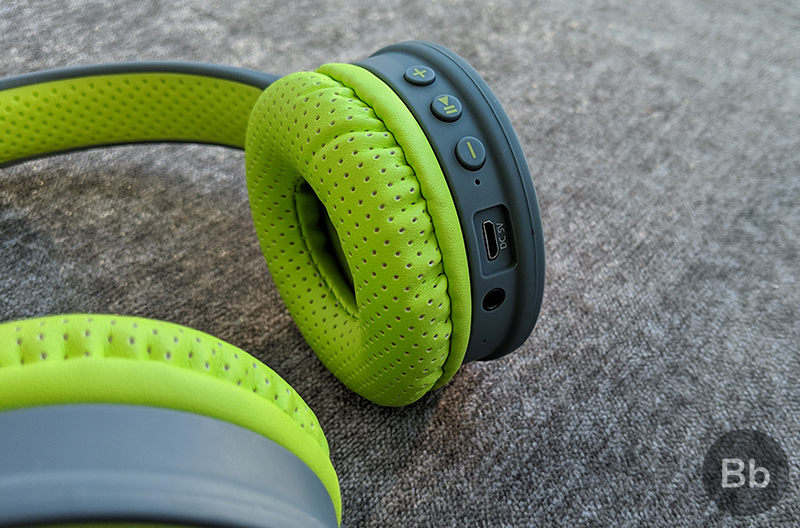 Overall, the build of the Toshiba Bluetooth headphones is disappointing and wearing them for a long duration can be a distressing affair. Let’s see if its performance is a saving grace.

It breaks my heart to see a headphone sound this awful. It almost feels like Toshiba has simply rebranded a cheap white-label product without putting any effort in tuning the audio output. The hollow bass makes leaves you feeling as if the instruments were made out of plastic, while the mids feel too feeble and trashy to shoulder crucial parts of the music. Likewise, the treble sounds too blunt and far from striking. 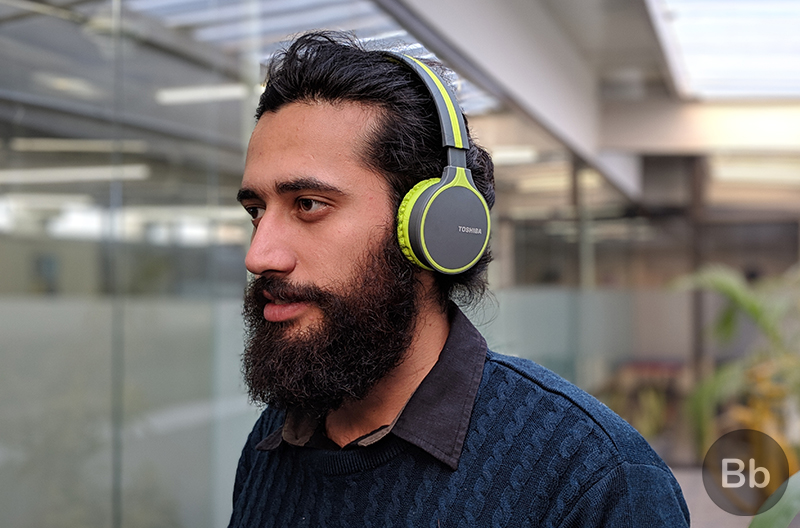 Overall, the mix of sound is utterly disappointing and while listening to tracks with a lot of instruments, the frequencies overlap, making the overall audio feel unclear. The headset does get really loud but the sound is distorted at higher volumes. Moreover, when the volume is above 60-70%, you can easily hear sufficient bleeding from the earcups and this can annoy others sitting next to you in public transport or in a quiet place.

I did manage to fetch out some bearable audio by adjusting the equalizer but that has to be tweaked with every track change, and this can get annoying and is certainly not very convenient for non-savvy users. The sound quality just does not make the cut for me and even when I can fix it by adjusting the EQ, the experience is still not as satisfying as I would like it to be. 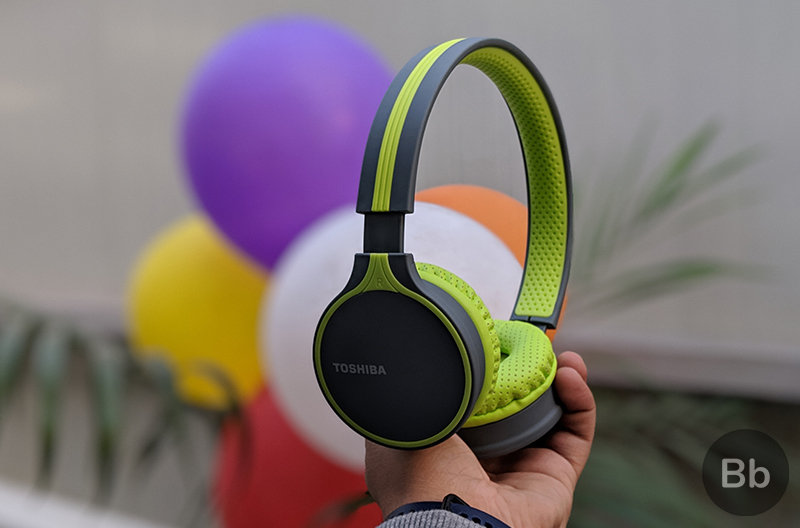 Overall, the audio quality is also disappointing but not as much as the build quality. However, there is not even a single thing that makes up for the frustrating experience.

You can also take calls with the Toshiba headphones using the inbuilt mic but it picks up a lot of noise from the background, spoiling the experience for the caller and you.

While the build and the audio quality on the Toshiba RZE-BT180H Bluetooth headphones are not up to the mark, it does fairly decently in terms of the battery life. The battery on the headset easily lasts for almost nine to ten hours which is more than the claim of eight hours by the company. However, please do note that this is on using the headset at two-thirds of the volume (for the reasons stated above).

Charging the headset may take almost three hours using the supplied micro USB cable and a basic wall adapter. This is not exactly bad when compared to other Bluetooth headsets in this price bracket. Overall, while I’m not really impressed by the battery, I’m not exactly as disappointed by it as I am by the build and the sound quality.

It’s clear that these attractive-looking Bluetooth headphones by Toshiba show off poor design, sound quality and have no features that make a compelling case in their favor. To sum it up, here are all things that are bearable and bad about Toshiba RZE-BT180H Bluetooth headphones.

Toshiba RZE-BT180H Bluetooth Headphones: Stay Away for Your Own Sanity

After using the Toshiba RZE-BT180H Bluetooth headphones for a week, I can say that the experience almost felt like a punishment, and besides the sub-standard sound quality, the discomforting build is what made the experience unbearable for me. Yes, those striking colors will be attractive but only if you these headphones as a prop for your desk and not actually use them.

If you wish to spend your hard-earned money effectively, you can pick up the Energy Sistem 2 Bluetooth Headphones (Rs 2,599) which offer a much better sound quality, almost the same battery life, and great comfort. You may also check out the boAt Rockerz 600 (Rs 2,274) which will offer clearer audio but with a battery backup of only 6-7 hours. Lastly, if you can be satisfied with a pair of wired headphones, there are plenty of options but I’d recommend you to go for a reliable option from Sony – the MDR-XB550 (Rs 2,999) with emphasis on bass performance.

There’s nothing redeeming about the Toshiba RZE-BT180H Bluetooth headphones. We certainly hope that the next-gen lineup, if there’s one, makes up for all these disappointments.