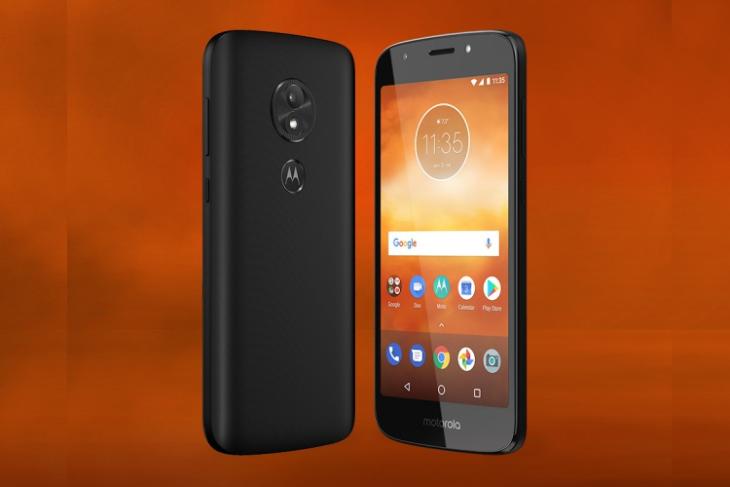 First launched in Brazil back in April, Motorola recently brought its Moto G6 series in India to give consumers a premium smartphone that rivals the budget devices from Xiaomi and Honor. However, the budget Moto E5 has been absent from the scene since its launch, the device is now speculated to make its India debut really soon.

As for evidence, the folks over at TechPP have recently spotted a promotional poster for the Moto E5 outside a Moto Hub (offline Motorola retail store) and it suggests that the device is headed to India and should see a launch in the next few weeks. The poster, which you see below, only highlights the key hardware specs of the device and does not shed any light on the launch date or pricing.

Also, a Moto E5 listing has been spotted on Amazon India at a price of Rs 10,770 and is being sold by a handful of third-party sellers. There’s currently no way to confirm whether the listing or the price itself is accurate or not, but it does give us hope that the Moto E5 will be launched in India in the coming weeks. 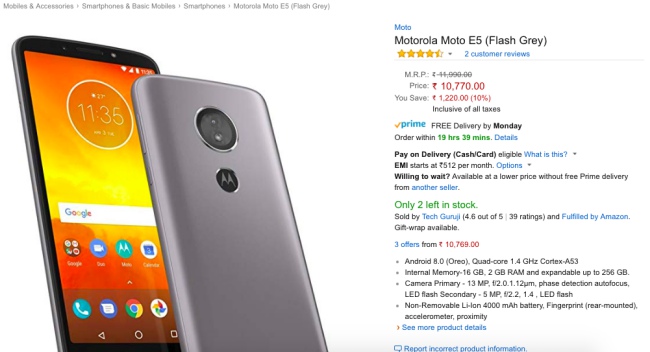 The Moto E5 features a 5.7-inch IPS LCD Max Vision display, with an 18:9 display (first Moto E series with a taller screen) and HD (720p) resolution. It is powered by the Snapdragon 425, coupled with 2GB RAM and 16GB internal storage- which is expandable up to 256GB via the microSD card slot.

In the optics department, the Moto E5 features a single 13MP camera with an f/2.0 aperture on the rear (no dual lenses here), along with a 5MP selfie shooter that should be enough for your casual needs. Both of these cameras can record video up to 1080p resolution at 30fps.

The Moto E5 also gets a slightly smaller but still spacious 4000 mAh battery, which supports fast charging over the USB Type-C connector. There’s also a fingerprint scanner on the rear, which has been well-crafted and sports the Moto logo.

There’s currently no official word on the pricing of the Moto E5 in India. But, if we were to speculate based on the €149 pricing of the device, then it’s expected to be priced in the Rs 12,000 ballpark in India.

This would, however, be quite high a price for a budget smartphone, especially when the Moto G series has also been priced in the same range. Guess we’ll have to wait until the official launch to know the exact details of the Moto E5 in India.

If you can’t wait for the official launch of the Moto E5, you can buy it right now on Amazon for Rs 10,770