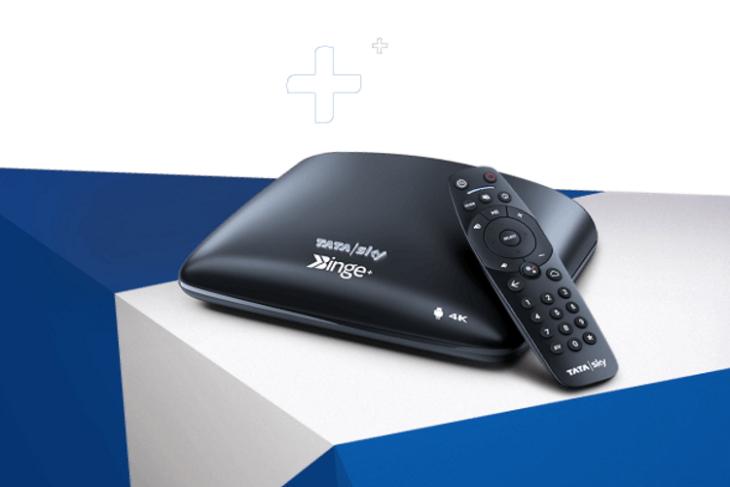 Following a number of leaks and rumors over the past few weeks, Tata Sky has finally launched its new set-top box (STB) powered by Android TV. Called Tata Sky Binge+, the device is a linear STB that will allow users to watch regular TV channels through the Tata Sky satellite TV signal, as well as stream OTT content from apps like Hotstar, Amazon Prime Videos and more.

Tata Sky did not reveal the complete spec-sheet of Tata Sky Binge+ set-top box, but what we do know is that the device runs Android TV 9.0 Pie software and the remote has built-in Google Assistant support out-of-the-box. The device is officially Android TV-certified and has support for the Google Play Store, which means users will have access to more than 5000 apps and games available on the platform. It also comes with 2GB of RAM and 8GB of internal storage.

Another notable feature is the pre-installed Tata Sky Binge app that allows users to catchup with TV programs from the past seven days. Other pre-installed apps include Hotstar, ZEE5, SunNXT, Hungama Play etc. Tata Sky is also offering one month of free Binge subscription with premium content from Hotstar, Amazon Prime, SunNXT, ZEE5 and more. Following the trial period, users will have to pay Rs. 249 per month to access the services that would otherwise cost Rs. 700 separately.

The Tata Sky Binge+ set-top box is already listed on the official Tata Sky website for Rs. 5,999, which is significantly higher than similar offerings from compatriots Airtel and Dish TV. Launched last year, both the Airtel Xstream and the Dish SMRT Hub are priced at Rs. 3,999, although, users can get them at reduced prices by exchanging their old set-top boxes.