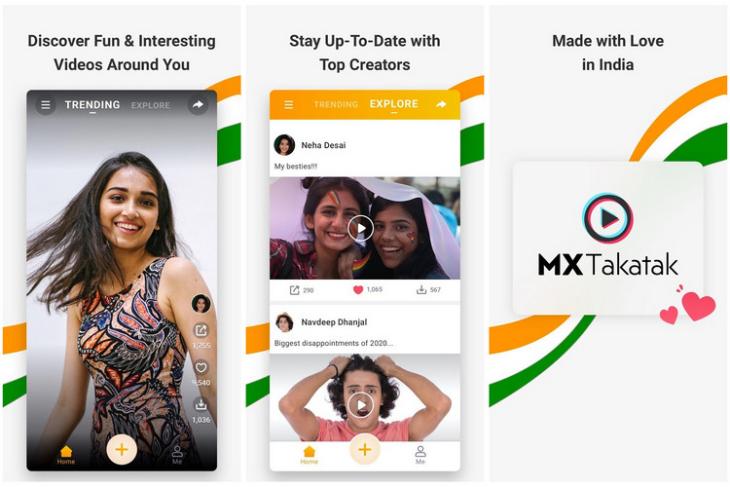 Following the ban on TikTok in India, a slew of similar video-sharing applications are jumping in to fill the void. ‘MX TakaTak‘ is the latest addition to the list that includes names like Mitron, Chingari, Moj, Roposo and more. As the name might have told you already, MX TakaTak comes from well-known media-player and streaming app, MX Player. It is already available for free on Android and is expected to be launched on iOS soon.

One thing that you immediately strikes you about the app is that it’s unabashedly a TikTok clone. And it’s not apologetic about that either. From the name itself to the color scheme in its logo and from the actual UI to how it’s marketing itself, everything screams TikTok with a capital T. However, that’s not necessarily a bad thing for many potential users. What’s noticeable, however, is the overt usage of the saffron, white and green tri-color scheme to emphasize its Indian-ness.

On its Play Store listing page, TakaTak claimed that it “provides rich video content and encourages creation full of imagination”. “TakaTak offers you real and fun videos that you can watch and share on social media. Browse all types of videos, ranging from Dialogue Dubbing, Comedy, Gaming, DIY, Food, Sports, Memes, and many more”, the listing said.

The app is available in nine Indian languages besides English. The Indian languages include Hindi, Telugu, Tamil, Kannada, Malayalam, Bengali, Gujarati, Marathi and Punjabi. It has been installed 50,000+ times already and has a relatively healthy rating of 4.2. You can install the app from the Google Play Store.