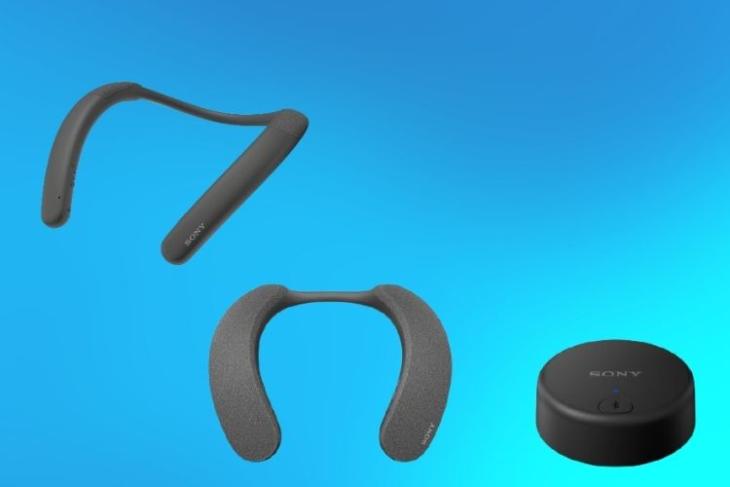 Sony has launched two wireless headphones under the SRS-series, the SRS-NB10 and the SRS-NS7, in India. While the Sony SRS-NB10 is designed to aid video calls and online conferences in today’s work-from-home culture, the Sony SRS-NS7 comes as the world’s first Dolby Atmos-supported wireless neckband speaker that connects to the company’s Bravia XR TVs. So, let’s take a look at their details.

Starting with the Sony SRS-NB10, the wireless headphones come with the company’s unique rest-on-the-shoulder design, featuring an upward-firing full-range speaker and a passive radiator to deliver immersive sound quality and minimal feedback.

It also features a couple of advanced microphones with support for Sony’s precise Voice Pickup Technology along with advanced signal processing to deliver crystal-clear voice during online calls and conferences. Furthermore, the audio device supports multiple simultaneous connections. It means users can connect it to their smartphones and laptops simultaneously and switch between them as per their needs.

As for the battery life, Sony claims that the SRS-NB10 can deliver up to 20 hours of battery life on a single charge. It also comes with quick charging support that can provide an hour of battery life with a 10-minute charge. Other than these, the headphones come with a USB-C port, an integrated mute button, and an IPX4 rating for splash resistance.

Now, coming to the SRS-NS7 headphones, the audio accessory is designed to deliver an immersive audio experience while watching movies or TV shows on Sony’s Bravia XR TV models. The company first announced these headphones last year, and now it has brought them to the Indian market.

The Sony SRS-NS7, as aforementioned, comes with Dolby Atmos support to provide a 360-degree spatial sound experience while watching content. Although it comes with a similar rest-on-the-shoulder design as the SRS-NB10, the SRS-NS7 features a higher-end X-Balanced speaker unit that “provides the optimum speaker size in a compact body and increases sound pressure and reduces distortion for clear music and vocals”, as per Sony.

The SRS-NS7 works with an additional wireless transmitter, the WLA-NS7 to connect with the Bravia XR TVs. The transmitter is provided in the box. However, other than connecting to the Bravia TV models, the headphones can also connect to other devices such as laptops, smartphones, and tablets. So, users can also use the device for online calls. Moreover, much like the SRS-NB10, the SRS-NS7 can also connect to two devices, such as a smartphone or a laptop, simultaneously.

Other than these, the neckband headphones come with a USB-C port for charging. Sony says that they can deliver up to 12 hours of battery life on a single charge, and up to 5 hours when listening at full volume. Nonetheless, users can charge them for 10 minutes to get an hour of playtime.

Now, coming to the prices of the Sony SRS-series headphones in India, you can check them out below.

As for the availability of the headphones, they will be available to buy in all Sony Center outlets and e-commerce platforms across India.