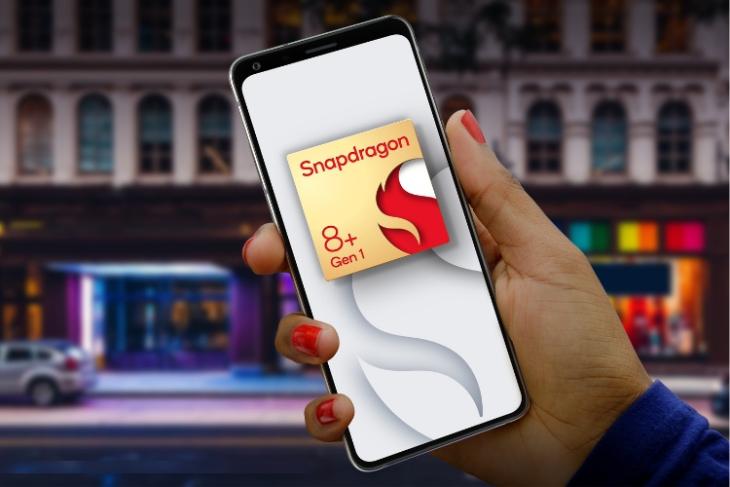 The Snapdragon 8+ Gen 1 mobile platform is Qualcomm’s attempt to fix the shortcomings of the standard 8 Gen 1, offering improved power efficiency while delivering a performance boost. This has been made possible by a simple change. The 8+ Gen 1 is developed on TSMC’s 4nm process node as opposed to Samsung’s foundry, which was used for the standard 8 Gen 1. That means we expect most of the user complaints about throttling and thermal issues to be eliminated with this chipset.

Moving on to the specifications, let’s start with the CPU and GPU. The Snapdragon 8+ Gen 1 still includes a single Cortex-X2 core, three Cortex A710 cores, and four Cortex A510 cores. While the performance and energy-saving cores are clocked at the same frequencies, the Cortex-X2 prime core is now clocked at up to 3.2GHz (as opposed to 3GHz on the 8 Gen 1). This means you will witness a 10% jump in overall performance.

As for the GPU, the Snapdragon 8+ Gen 1 includes the same Adreno 730 GPU. But Qualcomm has managed to increase the clock speed of the GPU by 10% to deliver even better gaming performance on upcoming flagship Android devices. Moreover, the company reduced GPU power consumption by 30% when compared to Snapdragon 8 Gen 1, which is amazing. It still supports features like Snapdragon Elite Gaming and HDR gaming.

Rest of the features, including the triple 18-bit ISP that can capture 3.2 gigapixels per second, the 7th-gen AI Engine with 27 TOPS performance, and the FastConnect 6900 Mobile Connectivity System, are the same. However, there’s one small change on the wireless connectivity front, i.e Snapdragon 8+ Gen 1 supports Bluetooth 5.3.

Finally, having said that, the AI engine on the 8+ Gen1 offers 20% better performance per watt when you compare it to the SD 8 Gen1. That means this upgraded chipset will offer you better battery life while using AI and ML-based features. “The company’s newest flagship platform, Snapdragon 8+ (Gen 1), is a premium-tier powerhouse delivering power and performance enhancements for the ultimate boost across all on-device experiences,” says the official press release.

As for when we can see smartphones powered by the Snapdragon 8+ Gen 1 launch in the market, Qualcomm says they will arrive in Q3 2022. Leading OEMs partners like Asus ROG, Xiaomi, OnePlus, Motorola, Oppo, iQOO, OSOM (startup by ex-Essential employees), and others will release commercial devices soon.

Moreover, if you wish to learn in detail how the Snapdragon 8+ Gen 1 compares to the Snapdragon 8 Gen 1, read the linked comparison article. And in case you have any queries, let us know in the comments!

First Snapdragon 8+ Gen 1 Phone Is Here and It’s Not What You Think!